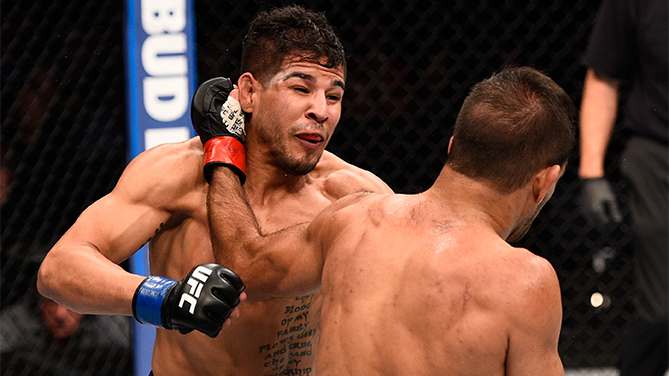 Bantamweight standout Rani Yahya showed off his veteran experience Wednesday against debuting prospect Matthew Lopez, submitting the Californian in the third round of their UFC Fight Night bout at Denny Sanford Premier Center in Sioux Falls.

After taking some hard shots early, Yahya scored a takedown, but Lopez landed on top and decided to resume the fight in a standing position. With two minutes remaining, a right hand put Yahya on the mat and Lopez went for an armbar, but the Brazilian veteran pulled free and took control from the top position. In a scramble, Lopez evened matters, ending up as the one in charge by the end of the round.

Lopez got the takedown to begin round two, Yahya countering with an armbar. Lopez then responded with an inverted triangle attempt, but Yahya waited out the storm and took top control, where he landed several hard right hands. Lopez scrambled his way out of trouble and stood up, but the bout went back to the mat with less than a minute left. There, Yahya went for the armbar, but the horn intervened.

The grappling battle continued in the third, Yahya largely controlling position until he moved in for the finish, sinking in an arm triangle that forced Lopez to tap out at 4:19 of the final frame. 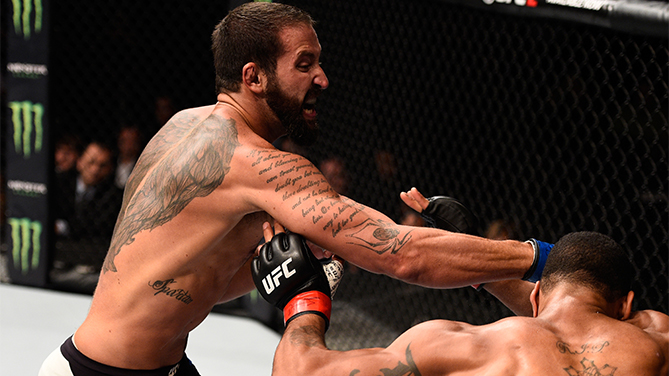 Florida’s Alex Nicholson rebounded from a rocky start to spoil the UFC debut of hometown favorite Devin Clark, knocking out the previously unbeaten Sioux Falls native in the first round.

Clark got a takedown a minute in and after landing some hard strikes, an arm triangle nearly finished matters before Nicholson escaped and got to his feet. After a low kick from Nicholson forced a brief halt to the action, Clark scored a flash knockdown that Orlando’s “Spartan” quickly recovered from. Nicholson stayed aggressive though, and a right hand dropped Clark to the deck with seconds to go. A follow-up left ended the bout, with referee Bobby Wombacher stepping in at the 4:57 mark.