Nguyen enjoying the path & journey the UFC is taking him on

Ben Nguyen may be dreading August 3, when he turns 30, but he shouldn’t worry, because when he says, “You never can fully predict where your life is gonna take you,” it’s clear that he’s already figured out the most important part of living, and that’s the living part.

If the flyweight contender was going to be a meticulous planner, following a rigid schedule that didn’t allow for any trips down the proverbial side streets, he might not be in Perth, waiting to fight Jussier Formiga this weekend and on the verge of making his move into the 125-pound title picture. But by following his muse – literally and figuratively – the South Dakota native turned Brisbane resident has had a more interesting journey than most.

“I feel like I’ve lived a fruitful life so far,” he said. “I left South Dakota five years ago, lived in Thailand for a year, and met my wife there. She’s Australian and she brought me to Australia and now I’m living here. So it’s been a rollercoaster ride. Then getting into the UFC after that viral video thing, it’s been a crazy last five years for me. I’ve lived my life quite full, so I’m happy where I’m at right now.” 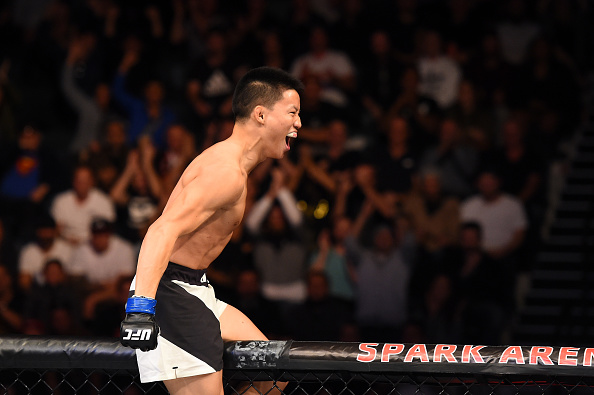 That viral video, which saw Nguyen stay cool in the face of an opponent trying to bully him at a weigh-in before blasting that opponent (Julian Wallace) out in 25 seconds the next night, put “Ben 10” on the world map, and two fights later he was in the UFC. And through social media, there is no chance of him ever forgetting that fight.

“I get tagged in it all the time on Facebook, so I see it weekly,” he laughs. “It never gets boring. I hit that guy hard.”

He hasn’t done too bad since then, winning four of five UFC bouts since his debut in 2015. Included is a current two-fight winning streak that saw him finish Tim Elliott via submission in just 49 seconds last June. But since then, there has been no sign of him in the Octagon.

“Where have I been?” he laughs. “Where did I go? I went back home to South Dakota in the summer, in August, for a bit. When I got back, there were some talks about me getting on the Sydney card, which was in November, but we couldn’t get the right opponent at the right time. UFC Perth was on the radar, and we decided to get on the Perth card, which was a little bit longer of a wait, but not a big deal. I’m still training, still perfecting my skills, so I don’t feel like it’s been a bad thing for me. It gives me time to work on skills that aren’t fight-driven for a certain opponent.”
RELATED CONTENT: UFC 221 Fantasy Preview | Preview every fight on the entire card

Patience is a virtue, but one not practiced by many in the fight game. That can be a good and bad thing, and Nguyen knows both sides. I ask him if the 25-year-old version of him would have taken a fight right after beating Elliott.

“That Ben Nguyen probably would have taken a fight the next week,” he said. “‘I’ll fight anyone right now.’ (Laughs) But it’s all about timing, and in the fight game, a lot of people make that mistake just rushing into fights that shouldn’t be taken. I believe with the way things have been going with me, we’ve been looking for the right fights and I think this is gonna help us get to what I want, which is the title shot. It’s a matter of playing it smart and sometimes just waiting it out.”

So is Brazil’s Formiga the guy that gets him to that shot?

“The last title challenger was Ray Borg, and he beat Jussier Formiga to get his shot, so why can’t it be my turn?” he said. “It can definitely be me and I feel like everyone in the top five has already fought DJ except for Jussier, so I feel like if I got into that top five, it could definitely be me and I’ve got that different style that no one really has, and that footwork and head movement and dangerous striking. I think that would be a lot more exciting than watching another grappler fight Demetrious Johnson.”

Solid points from a young man with a plan, but enough of a sense of adventure to veer from that plan if necessary in 2018.