Ngannou predicts one of his 'easiest' career fights against Miocic

The story of Francis Ngannou continues this Saturday when he challenges Stipe Miocic for the UFC heavyweight title in the main event of UFC 220 in Boston, but there’s no reason why he can’t take a momentary look back at where he’s been and what he went through to get here. 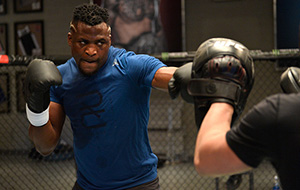 “When I started this journey nine years ago, no one believed me, no one at all,” he said. “Everyone was like, ‘Oh man, come down, that’s crazy. You can’t do that. You can’t succeed.’ And I just did my thing by myself because I always believed it. Even when I was in the hardest situation I had ever been in my life, I still had that feeling, I still believed I was going to be the world champ. I have something in me that always told me that I would do it, that I was special.”

Through 11 wins in 12 pro fights, a run that includes a perfect 6-0 slate in the UFC, Ngannou has proven that he does have a special talent for this sport. Yet the funny thing is that the Cameroon native’s dreams of becoming world champion had nothing to do with mixed martial arts. And, in fact, if he had his initial way when he made the trip from Cameroon to France, he would be discussing fights with Anthony Joshua and Deontay Wilder right now.

“Mixed martial arts wasn’t my goal and I didn’t pay attention when people started telling me you were born for this, you should do this sport, you’re made for this sport. I said, ‘That’s not my problem. I want to be a boxer.’”

The 31-year-old laughs about now, because life has gone in quite a different direction from when he arrived in Paris without a place to stay, friends, or anything other than a dream to become the next Mike Tyson. Luckily, he met folks like Didier Carmont, who trained the raw talent and helped him get his first apartment in his new city, and later, Fernand Lopez. Together, the two convinced Ngannou that as good as he was with his hands, if he rounded out his skill set, he could become the UFC heavyweight champion. 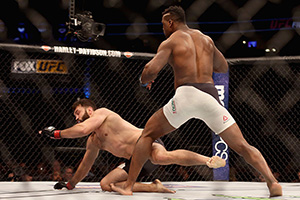 “I said, ‘Okay, what am I gonna do with the UFC heavyweight belt? I’m not interested in that,’” he recalled. “Today, I’m right here, working for that belt.”

Between those early days when he decided to take a stab at MMA and today, it’s been just four years, a remarkably short period of time for someone who may have a UFC title come Sunday morning. But just like Ngannou said, he was special, and after a couple MMA fights and a couple paychecks, the sport grew on him.

“That was interesting, let’s do this. I do need that money,” he laughs when talking about his early fights. But even after a 5-1 start to his pro career, when Lopez brought a UFC contract to him in 2015, Ngannou didn’t have the reaction the coach thought he would have.

“You’re not that excited?” Lopez asked.

“Yes, I’m excited,” Ngannou responded. “MMA gave me the opportunity, so let’s do this. If I switch the sport, I’m going to maintain my goal to become a world champion and become the greatest.”

RELATED: Get tickets for Boston | How Ngannou Could Win | UFC Embedded

His subsequent six fights in the Octagon couldn’t have gone better, as he’s finished each of the victories, four in the first round. In his last two bouts, he’s knocked out former UFC champion Andrei Arlovski and former Strikeforce, DREAM and K-1 Grand Prix champ Alistair Overeem, and all of a sudden. The world is on board the Ngannou Express.

“It’s something natural,” he said of his appeal. “I just do what I have to do and it gives people that excitement and enjoyment.”

It also gives every heavyweight a moment of pause, because this is one fighter who has legitimate one-punch stopping power. There have been some doubters, but Ngannou hasn’t wavered in his belief, even telling the veteran Overeem before their bout that “The Demolition Man” was going to sleep.

“I knew that was gonna happen,” he said of his December victory. “There is no way he’s not gonna go to sleep. I certainly knew that if I connected, he was gonna go down. It will be the same thing for Stipe.”

Bold words, but Ngannou isn’t backing down from any of them, even as he prepares to face a champion who has earned his stripes as the best in the division and a pretty decent knockout artist himself.

“Stipe is great as a heavyweight champ, but that was before me,” Ngannou said. “In France, we say in the land of blind people, the one-eyed man is king. But when the two-eyed people come, that one-eyed man who was king falls.

But what about Miocic’s track record and his confidence that he will retain the title this weekend?

“Stipe can believe what he wants to believe,” Ngannou said. “Alistair believed that also, but at the end of the day, we have the result and we know who is the boss.”

Is Ngannou the new boss? We’ll know on Saturday. In the meantime, Ngannou will soak this all in and remember that fate has a funny way of changing a life from one direction to another.

“Things go very fast and sometimes I don’t realize how fast it’s gone,” he said. “It’s weird because sometimes I still see myself as that guy from four years ago, saying I can’t do this, I can’t do that. And then after, yes, you can.”