Next in Line? Cub Outlasts Stephens 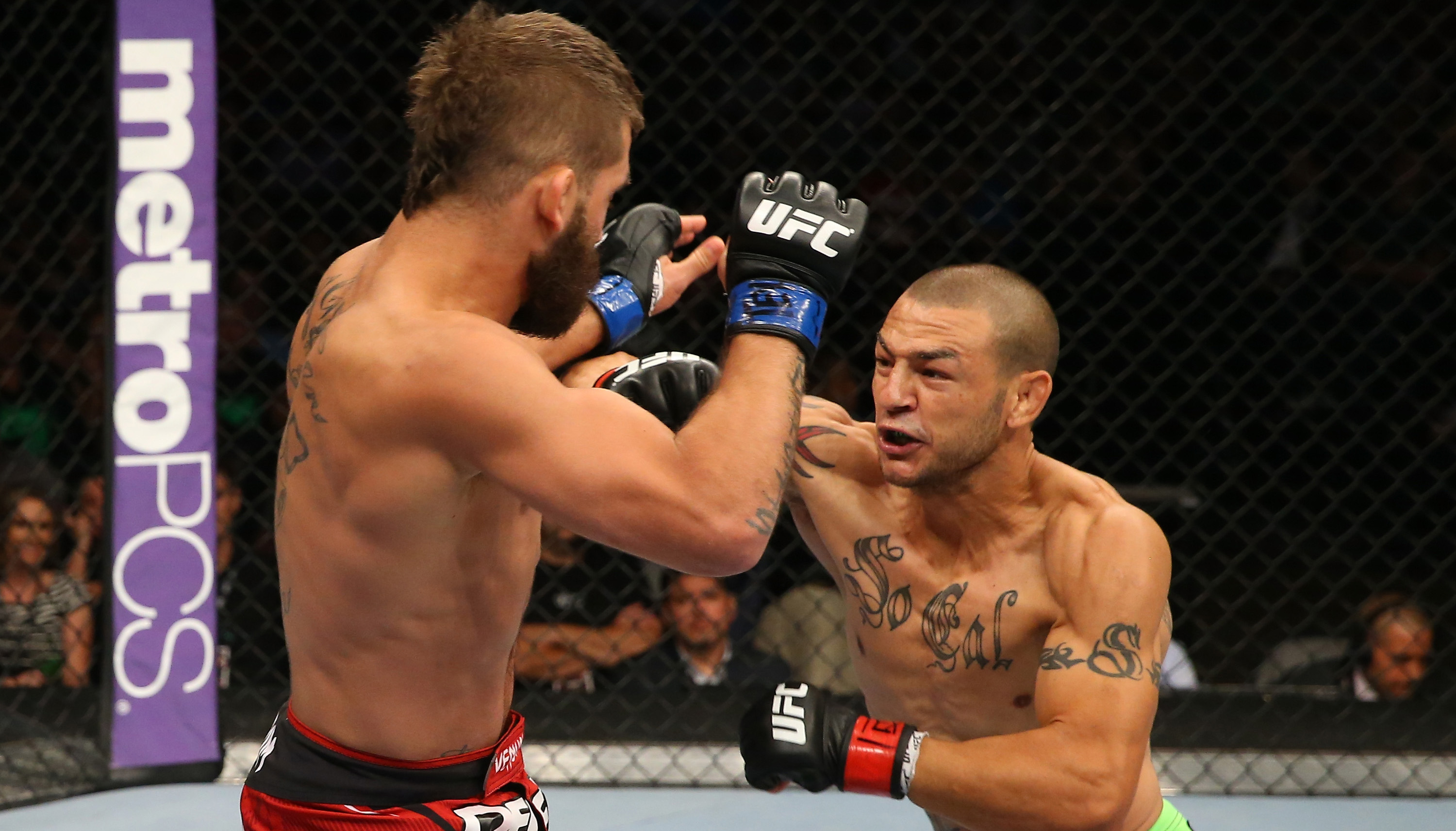 SAN ANTONIO, June 28 – Cub Swanson may have earned his shot at the featherweight title. Following his sixth consecutive win, a hard fought five-round unanimous decision victory over Jeremy Stephens at AT&T Center, the veteran contender is the clear next in line for the winner of August’s bout between 145-pound champion Jose Aldo and challenger Chad Mendes, though he’s not asking for it.

He shouldn’t have to after Saturday night’s effort.

Lauded for his hands, Swanson’s offense was dominated by his kicks as the fight began, 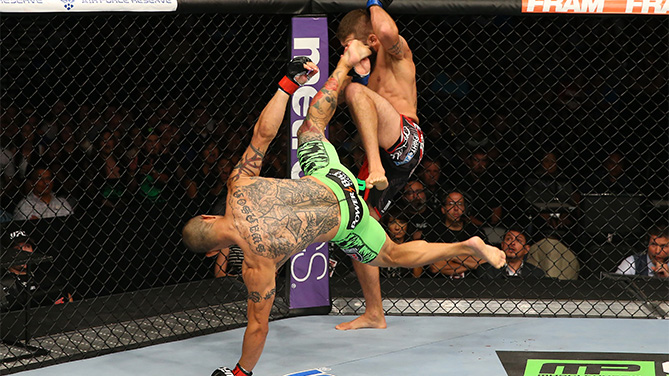 keeping Stephens from getting close enough to land one of his bombs. In response, Stephens started to throw his own kicks, mainly to the legs, as he tried to slow his foe down. With a little over 90 seconds left, the Iowan knocked Swanson off balance with a right hand, but the Palm Springs native quickly recovered. A furious exchange late in the round resulted in Swanson landing a 1-2 and Stephens catching a kick and putting his opponent down with a right hand, getting the crowd into it as the stanza ended.

Stephens’ right hand continued to get Swanson’s attention in round two, rocking him twice in the first half of the frame. This prompted Swanson to pick up the pace, and he had his positive moments in spurts as the round progressed. In the final minute, Stephens pinned Swanson to the fence in search of a takedown, but he couldn’t get it.

Coming out fast for the third round, Swanson got himself back in the fight with a flush kick to the midsection that visibly stunned Stephens. Forced to go on the defensive, Stephens weathered Swanson’s follow-up attack and sought out a takedown. And though he didn’t get it, he did buy himself some valuable time to recover, allowing him to get out of the round.

In the fourth, Swanson was the busier of the two while standing, though Stephens did keep trying to land haymakers while also looking to win the grappling battles against the fence.

Trying to finish strong, Stephens outworked Swanson early in the final round, but Swanson’s body kick again stunned the “Lil’ Heathen” and allowed the Californian the openings to drill his foe with punches upstairs that bloodied his face. Stephens wasn’t done yet though, as he made a spirited final charge that got the crowd roaring.

Welterweight prospect Kelvin Gastelum may be going home a little light in the wallet after coming in overweight for his bout against Nico Musoke, but he’ll also be doing it with a win after a workmanlike effort that earned him a unanimous decision. 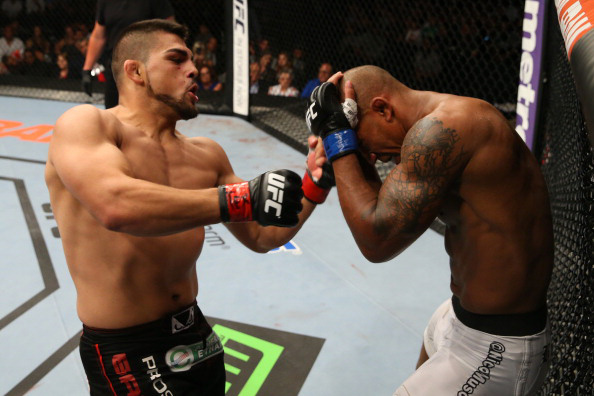 Musoke’s striking was sharp as the fight commenced, but the Stockholm native soon engaged in a grappling match with Gastelum, with the Arizonan taking the edge in that battle until a slam by Musoke. Midway through the round, Musoke took his opponent’s back and though he wasn’t able to do anything with the dominant position, he kept him there until the final seconds of the frame.

Gastelum raced out of his corner for round two, quickly dragging Musoke into a slugfest. After some exciting exchanges, Musoke was able to slow things down and keep Gastelum at the end of his jab, but whenever the action got near the fence, it was the TUF 17 winner’s fight, and he made the most of those opportunities, clearly evening things up on the scorecards.

Musoke went back to grappling in the third, but Gastelum got loose easily and continued his striking attack, landing flush shots on the steel-chinned Swede until the final horn, wrapping up a solid victory.

Brazilian middleweight Cezar Ferreira survived some dicey moments in the final stages of his bout with Houston’s Andrew Craig to emerge victorious with a three-round unanimous decision.

The bout heated up immediately as both fighters threw at the same time, with Craig missing a kick and Ferreira a punch, leading to a trip to the mat and Ferreira nearly getting a guillotine choke. Craig calmly got loose and back to his feet, but with a cut on the top of his head. The pace dipped from there as the two circled each other, but Ferreira put some more points on the board with a takedown late in the frame.

There was little compelling action in the second, as neither fighter was able to take the lead in a significant fashion. “Mutante” was able to deliver a thudding slam in the third round, bloodying Craig once again. Ferreira searched for a rear naked choke as Craig fired punches back at his foe, and while it looked like the fight would remain there, Craig found a second wind, escaped, and then drilled Ferreira with a kick to the head that staggered him. As the crowd erupted, the Texan emptied his tank in search of the finish, and while he didn’t get it, he certainly went out fighting.

In his first fight since a losing effort against UFC featherweight champion Jose Aldo in February, Ricardo Lamas wasn’t spectacular, but he got the win, outpointing Aldo’s Nova Uniao teammate Hacran Dias over three rounds. 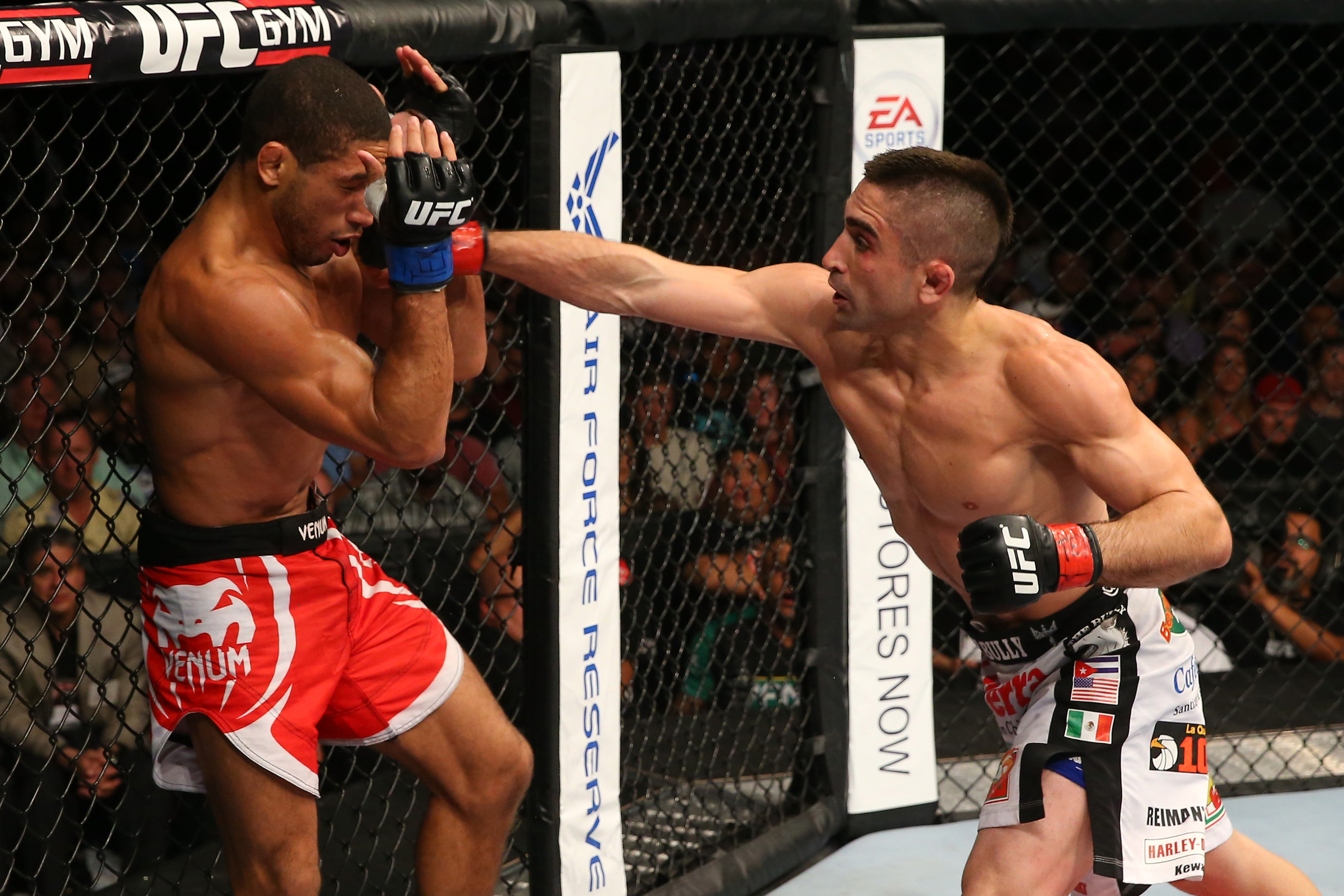 up his strikes nicely while Dias focused on kicks to the leg and hard overhand rights. The two did lock up for a bit late in the round, but that sequence resulted in a stalemate and a return to striking for the rest of the round.

Making a concerted effort to get the fight to the mat, Lamas locked up with Dias early in the second, but Dias wasn’t conceding the takedown, forcing the Chicagoan to go back to his busy striking attack. Midway through the round, Dias scored a flash knockdown thanks to a right hand to the top of the head, but in following up, the Brazilian allowed Lamas to get the takedown, albeit briefly. Once the two rose, Dias began stalking with more urgency, but his own takedown attempt got turned away.

Lamas’ attempts to win the grappling battles almost paid off big in the third as he took Dias’ back while standing and nearly sunk in a choke, but the Brazilian shook him off and got the dominant position on the mat until the action stalled and the two rose. After going back and forth against the fence, the two went to the mat again briefly before standing, but locked up within seconds, and they stayed in that position until the final horn. 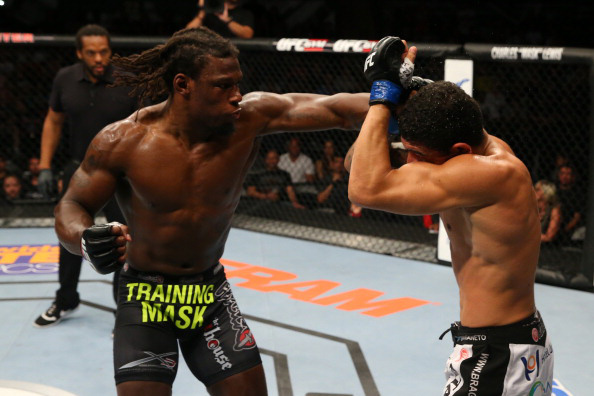 Hester started out well with some good movement and kicks that kept Neto from getting close, but the Brazilian Jiu-Jitsu ace soon got his takedown and he began to work for the submission. Hester’s defense was solid though, and he made it out of the round. Now he just needed to get his offense in gear, and he came out fast with some hard shots to the body and head in round two, keeping things standing until a takedown midway through the round. At first, Hester landed on top, but Neto reversed him quickly and got into the mount position, eventually locking on a kimura. The bell intervened though, giving Hester another round to get the job done.

The Atlanta product went all-out in an effort to get Neto out of there in the third round, but after rocking his foe, he slipped to the mat and Neto capitalized, mounting his foe and trying to keep him grounded. Hester fought back though, reversing and getting the top position. Neto tried to hold on as Hester ripped off strikes, but with a minute left, the two stood. Hester was able to fire off a few more shots, but a late takedown got Neto out of trouble as the bout ended.

After five opponents fell through, lightweight Joe Ellenberger finally got a chance to make his UFC debut, and he got a fight from number six - California’s James Moontasri -  who battled the Omaha  native tooth and nail and almost knocked him out in the first round, only to see Ellenberger battle back to take a three round split decision.

Ellenberger’s grappling served him well for the first half of the opening round, but a right hand by Moontasri just before the midway point turned things around for the newcomer, dropping the 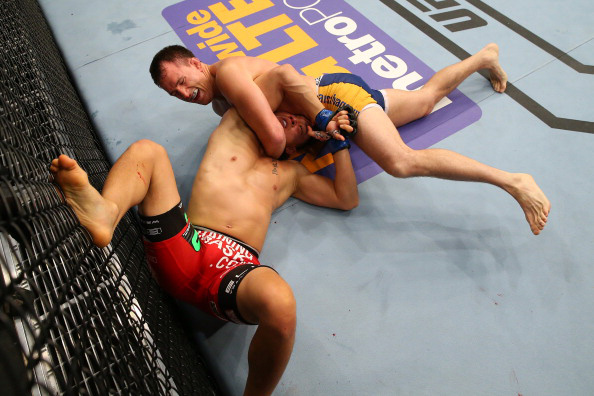 Nebraskan and putting him in deep trouble. Ellenberger appeared to recover, but when Moontasri let him up, his legs were still wobbly, leading to another knockdown. Again, Moontasri tried to finish, but Ellenberger made it out of the round.

After being cleared by the Octagonside physician to continue, Ellenberger got the fight to the mat and took Moontasri’s back. The Californian got out of some dicey situations though and ended up in the top position with two minutes left, both fighters starting to feel the effects of the grueling battle. With a minute left, the two stood, but Ellenberger got the bout back to the mat, where he let loose with ground strikes until the bell.

An Ellenberger takedown attempt turned into a stalemate as the final round began, forcing a restart from referee Frank Collazo. Ellenberger did get his takedown when the action resumed, but Moontasri made it back to his feet soon enough, and the two circled each other carefully until another Ellenberger takedown attempt. With a minute left, the two hit the mat, Ellenberger seeking a submission from the bottom, but to no avail, with Moontasri trying a pro wrestling-style flying elbow just before the bout concluded.