Next Big Thing? Yusuff Remains Calm About His Rise

And now he’s 8-1 as a pro, fresh from a first-round knockout of Suman Mokhtarian, and hearing plenty of “Next Big Thing” talk. But he’s staying cool.
By Thomas Gerbasi • Mar. 28, 2019

After visits to Australia, Las Vegas and Jordan for his last three fights, Sodiq Yusuff embraces the two and a half hour trip from Bladensburg to Philadelphia for Saturday’s meeting with Sheymon Moraes.

“This is as close to home as I’ve fought in a while,” said the featherweight prospect. “It’s been a long time since I’ve been this close and I know a lot of my people are gonna be making the trip over to come visit and watch the fight. And even if they can’t be there in person, I always get the same amount of love from my family, and they’re always watching on TV. Also, my people back home in Nigeria don’t get to watch it, but they talk to each other through text with whoever is here.”

Maryland may be home these days for the 25-year-old, but his heart will always be in the land of his birth, and that affection has been returned to him as he climbs the ladder in the UFC.

“It’s all been love,” he said of the reaction to his rapid rise back in Nigeria. “They know my success is their success, so it’s all love and prayers.”

And Yusuff won’t be the last fighter from the African nation getting that love. Kamaru Usman is the new UFC welterweight champion. Francis Ngannou is a heavyweight wrecking machine. And the list of UFC fighters with African roots (Kennedy Nzechukwu, Marc Diakiese, Don Madge, Israel Adesanya, Abdul Razak Alhassan, Jimi Manuwa, Abu Azaitar) is growing by the minute, and “Super” Sodiq couldn’t be prouder.

“It’s like a rising tide raises all boats,” he said. “It starts with just one or two people and the next thing you know, it turns into a whole wave. I’m sure a lot of kids out there saw Kamaru win that belt and they were super inspired by it. And maybe five, ten years from now, you might see more than just five or six of us. You might see almost the whole roster full of Africans.”

In the meantime, there is likely someone in Lagos looking at Yusuff and getting the itch to put the gloves on and start dream chasing.

“If that doesn’t inspire you, I don’t know what will,” he said. “There’s nothing that could drive you more than being somebody’s motivation to make it out.”

Brought to the United States by his mother at the age of nine, Yusuff basically had to learn a new culture and way of life, and there’s something to be said for that ability to adapt, move forward and stay hungry. In fact, those may be the reasons he’s one of the top prospects in the sport.

“The immigrant mentality is a big thing,” Yusuff said. “Sometimes it’s hard for you to see the value of something if you were born into it. But if you come over here from another country and you have to chase it and you’ve seen the other side of the coin, it’s easier to say, ‘Oh man, let me give this thing all I’ve got.’ This is a country where you really can chase your dreams. A little kid like me from Lagos, Nigeria is fighting in the UFC, the top MMA show in the world, now. Whenever the opportunity presents itself, the small window that it gives you, it’s easier to pounce on that if you’re an immigrant because you’re always looking for that; that’s the whole reason why you came to this country.”

And now he’s 8-1 as a pro, fresh from a first-round knockout of Suman Mokhtarian, and hearing plenty of “Next Big Thing” talk. But he’s staying cool. 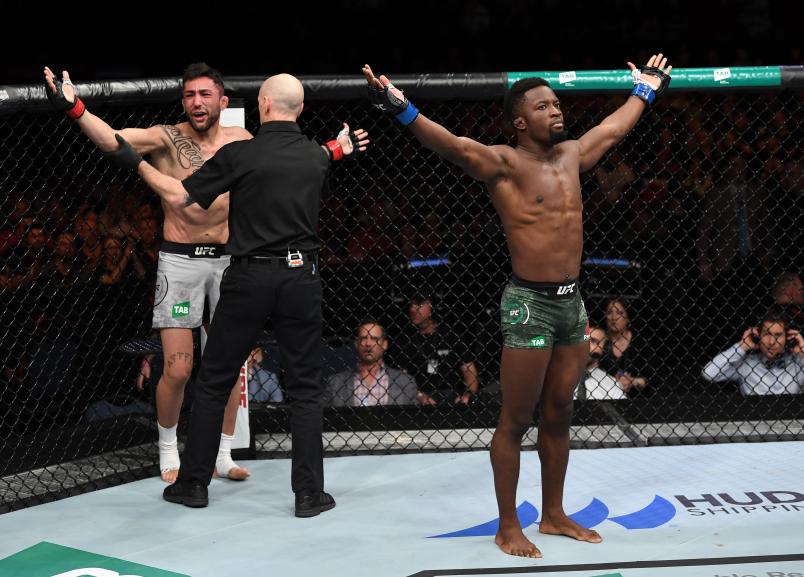 Sodiq Yusuff celebrates after his TKO victory over Suman Mokhtarian of Australia in their featherweight bout during the UFC Fight Night event inside Adelaide Entertainment Centre on Dec. 2, 2018 in Adelaide, Australia. (Photo by Jeff Bottari/Zuffa LLC)

“I’ve been getting that a lot, but I just try to not let it get to my head,” he said. “I’m just trying to do the same thing I’ve been doing for the past six, seven years. The new people that are showing up, the new friends, the new fans, it’s all the same to me. I’m just keeping my nose to the ground and doing the hard work.”

So no stopping to smell the roses?

“Not yet,” he said. “I keep telling myself I’m gonna do it after a certain fight, but it never pans out.”

He pauses, then wonders out loud if that time will come after Saturday night’s bout. Then he stops.