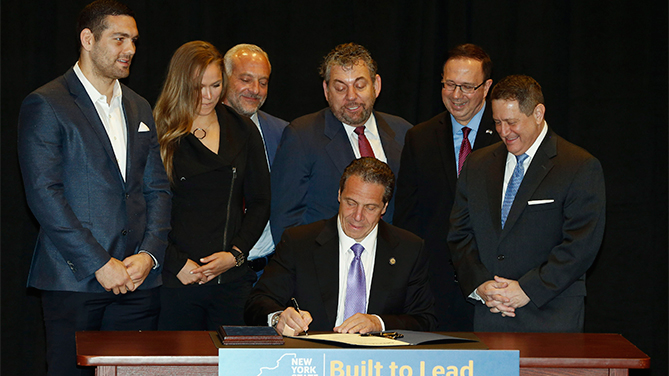 The fight to legalize professional mixed martial arts in New York began in December of 2007. On Thursday, the fight was won, as Governor Andrew Cuomo signed the MMA bill into law at Madison Square Garden.

“Coming to New York, and speaking as a prideful New Yorker with a tad of New York arrogance, I think this really completes the journey for MMA because coming to New York means you're coming to THE place,” Gov. Cuomo said. “Madison Square Garden is the international icon for great sports events. And MMA is going to be in this Garden.

The MMA bill was voted on last month in Albany, with the March 22 verdict coming back with a resounding 113 to 25 tally in favor of legalizing the sport in the Empire State. Today, it is law, with UFC Chairman and CEO Lorenzo Fertitta announcing that with the approval of the New York State Athletic Commission, the promotion will hold its first event at MSG on November 12, 2016, which happens to be 23 years to the date after the first UFC event in Colorado.

For a member of the Gracie family that helped create the UFC almost a quarter of a century ago, MMA legend Renzo Gracie, it’s a day he has longed to see.

“It's unbelievable,” Gracie said. “We've been working hard on this and I really thought it took too long. Things are normally very fast-paced in the city here, but this was very slow. But I believe New York is the window to the world. Whatever shines here, shines everywhere else, and finally, it's here.”

Fertitta also promised an upstate New York event before the end of the year. No date or site has been determined yet.

Joining Gov. Cuomo and Fertitta were former UFC world champions Chris Weidman and Ronda Rousey, as well as a host of New York-based fighters and UFC executives. One of this esteemed crew was Marc Ratner, the UFC’s Vice President on Regulatory Affairs and a future Boxing Hall of Famer for his work with the Nevada State Athletic Commission. When asked where this day ranks among the great accomplishments of his career, he said, “Because of the length and longevity and what it means to the sport, it's right at the top. It's unbelievable to spend that much time and finally get it done. It was very, very important.”

And while there were tough battles along the way, with the bill getting enough support to be passed over the last several years but never being given the opportunity to go to a vote until this March, Ratner never lost faith.

“I've said throughout the years that it was a question of when, not if. So I was confident.”

So was Gov. Cuomo, who supported the bill and the legalization of the sport, not just from the aspect of fair play for the athletes, but for the economic benefits MMA will bring to the state.

“MMA has really captured the imagination as a sport,” he said. “There are millions of viewers, and the growth has been exponential and global, and it has been fascinating to watch the growth. And we're excited that it's going to come to New York. As a sport, we believe we've added precautions that will make this sport a better sport. We have more health coverage, more insurance coverage. The state athletic commission is going to expand in size, so we'll have experts in MMA so that we can properly regulate it. But the economics that go with this sport are undeniable. So this is going to be a great economic engine for New York.”
MMA is in New York. Finally.

“It was a long time coming, but it happened, and good things are worth the wait,” Gov. Cuomo said.