A new world for the women's bantamweight division 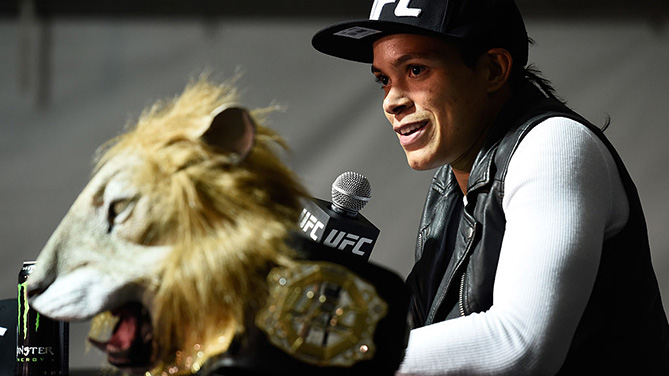 Let the reign begin. It isn’t fair to say that Amanda Nunes hadn’t established herself as the UFC women’s bantamweight champion before Dec. 30, because she did.

But for most observers who watched the musical chairs at 135 pounds ever since Ronda Rousey lost to Holly Holm in November 2015, Nunes’48-second stoppage of Rousey in the main event of UFC 207 last Friday cemented “The Lioness” as the queen of the division.

Now the fun begins and the questions start. Will Nunes have a three-year or more reign like Rousey did, or will someone come out of nowhere in 2017 and topple her? Will Rousey return and can she recapture the form that kept her unbeaten and untouched during her stay as champion? Will Miesha Tate come back? Will one of the young guns of the division make their move? Or will it be a veteran that is Nunes’ biggest threat?

Whatever those answers may be, 2017 should provide them, and the first question and answer should be settled by the end of the month, when No. 1 contender Valentina Shevchenko and No. 2-ranked Julianna Pena meet in Denver.

If you haven’t been paying attention, here’s a heads up: Amanda Nunes was always supposed to be this good. When she entered the Strikeforce promotion in 2011, there was a buzz around her that she was going to take over the division as soon as she wanted to. That didn’t happen, and Nunes went through some growing pains as she relocated to the U.S., switched teams and eventually found consistency.

Once that happened, she’s been hitting that potential fight game insiders always saw in here. Five consecutive wins, four finishes, and victories over two former world champions and an Olympic silver medalist. Amanda Nunes is for real, and she might be sticking around a while with that championship belt. 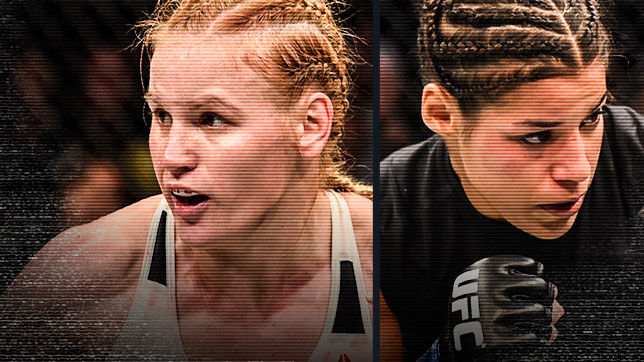 THE NEXT IN LINE

It’s assumed that the winner of the five-round UFC on FOX main event between Valentina Shevchenko and Julianna Pena will get the next shot at Nunes, and that’s fair, given the track record of both fighters and the absence of anyone with a stronger case for a shot. So, who wins and then what happens next? It’s a tough fight to call, given Shevchenko’s well-rounded skill set and Pena’s versatility, tenacity and mean streak.

“The Venezuelan Vixen” is great at getting into a fight and finding a way to win. Shevchenko proved in her win over Holly Holm that she’s ready for anything on fight night, and she also pushed Nunes pretty hard in their UFC 196 bout before losing a decision. Shevchenko can let fights get close, and in a close fight, Pena usually steps it up. So it should be an interesting 25 minutes in ver.

As for the future, given their first fight, which was more tactical than anything, Nunes-Shevchenko II doesn’t bring as much intrigue as Nunes-Pena, and Pena can sell a fight better than most. But Jan. 28 will tell the final tale.

With Holly Holm and Germaine de Randamie off to fight for the UFC women’s featherweight title in the main event of UFC 208, that clears the way for several veterans to make their move back to a title fight, something that didn’t seem too possible when Rousey was wrecking challengers left and right.

Top on this list are Cat Zingano, Sara McMann and Liz Carmouche. Carmouche is probably the longshot after a long layoff that ended with a UFC 205 win over Katlyn Chookagian, but Zingano and McMann are probably a win or two away from that title conversation, and if there’s an edge there, give it to Zingano, who owns a 2014 win over Nunes that I’m sure “The Lioness” would like to get back.

But McMann is showing her best UFC form yet as of late, so don’t count her out to make a 2017 run at the champ. Also quietly closing in on the top spot in No. 5-ranked Raquel Pennington. This is a fighter who was in the UFC and once competing with a losing pro MMA record, but since dropping a split decision to Holm in 2015, “Rocky” is 4-0 with wins over Jessica Andrade, Bethe Correia, Elizabeth Phillips and Miesha Tate.

And what makes her scary is that while she won’t show up on highlight reels, she’s got good fundamentals and can sneak up on you. And before you know it, you’ve lost. Pennington is definitely one to watch in 2017. It will also be interesting to see what Leslie Smith, Alexis Davis, Bethe Correia, Lauren Murphy, Marion Reneau and Jessica Eye deliver over the next 12 months.

Call me crazy, but even though I get into the fights for free, I would pay to watch a third fight between Rousey and Tate. Yes, I know Tate is retired and Rousey is taking some time to figure out her next step, but if “Rowdy” Ronda does return, what would be a better fight than one against her heated rival, who I’m sure could be coaxed out of retirement for an opportunity to get on the board against someone who beat her twice.

But even if Rousey-Tate III doesn’t happen, seeing one or both of these fighters back in action would captivate the UFC fan base. Tate was a world champion in 2016. It isn’t like she got old against Nunes and Pennington. Against Nunes she ran into a buzzsaw, and she just didn’t seem focused against Pennington.
It happens.

But I don’t think she’s a fighter with nothing left to give. As for Rousey, I believe someone as competitive as she’s been throughout her life won’t leave on the loss to Nunes. There’s still more to do, and hopefully we’ll see it in the coming 12 months. Either way, despite all the compelling action going on at 135 pounds, the names Rousey and Tate have not disappeared from the landscape just yet.

For a while, the women’s bantamweight division had gotten to the point where it was Rousey and everyone else, as the then-champion cleaned out the top contenders at 135 pounds, with few, if any, rising stars making their move. But at 2017 dawns, there’s a host of prospects that could make their move sooner, rather than later.

And the best part about fighters like Irene Aldana, Katlyn Chookagian, Lina Lansberg, Veronica Macedo, Ketlen Vieira and Kelly Faszholz is that they all show up to fight when the Octagon door closes, setting up some intriguing matchups against each other and against the division’s veterans that should keep all eyes on the bantamweight class.