New Version Of Overeem Has A Surprise Ready For UFC Beijing

Late last year, Alistair Overeem found himself on the wrong side of a highlight reel knockout courtesy of Francis Ngannou, when the Cameroonian contender connected with a powerful left hand that sent him crashing to the canvas.

After making his way back to the cage, the Dutch veteran spent long chunks of his return being ground into the mat by Curtis Blaydes, before the still developing former junior college National champion wrestler stopped him with a series of punishing elbows from top position.

At age 38 and standing as one of the most decorated heavyweights in mixed martial arts history, it would have been easy for Overeem to call it quits. Instead, the perennial contender has once again hit the reset button, shifting his base of operations to the Rocky Mountains in order to train alongside Blaydes as a member of the Elevation Fight Team.

“We were already talking a little before about coming over to train and then I had another disappointing loss and I said, ‘I think this is the right time to check it out,’” Overeem said of his decision to work with the Denver-based team. “Once I tried it out for a couple of days, I liked it a lot and I made the necessary changes (to come join this team).”

While adding the UFC heavyweight title to the collection of championships that adorn his mantle has long been one of Overeem’s chief objectives, the veteran fighter is also rather pragmatic when it comes to his place in the division and the more immediate goals he needs to accomplish in order to make another run at the title.

The pairing, which serves as the co-main event of Saturday’s debut fight card in Beijing, China, was as unexpected to Overeem as it was the fight community when it was first announced. However, the chance to compete this weekend was at the top of the former Strikeforce and DREAM titleholder’s wish list and he knows that before he can work his way back into title contention, he first needs to snap out of his current funk.

“He has not been on my radar, so in that way, it was a surprise,” he said of Pavlovich, who carries a 12-0 mark into this weekend’s penultimate contest. “But fighting on the Beijing card was one of my wishes, so I’m very happy to be able to fight here this Saturday.

“The title is definitely still on my mind, but you have to be realistic and look at one thing at a time. First we have to get back into the win column and we’re going to do that on Saturday and then we’ll take it from there.

“I worked hard in the last couple of months, so my mind is focused on putting on an incredible performance to the best of my abilities and I think I put in the work and the team at Team Elevation put in the work to share that on Saturday.”

With 75 combined appearances between MMA and kickboxing, Overeem could have very well opted to trade on his name for a few years. He could have continued working with the same people, taking a fight every four-to-six months while building up his retirement fund without pushing himself too hard.

Instead, he packed his bags once again and moved out of his comfort zone, immersing himself in another training camp at altitude, with new coaches, new training partners and a renewed passion for his craft.

“There is a certain motivation, a certain hunger that comes from deep within,” he began, explaining his reasons for continuing to compete. “I love the sport. I love to compete, I love to train, and I love to get better.

“This move to Team Elevation shows that because it’s another jump and I think joining the new team was instrumental. Of course, with joining a new team, the motivation is new. The team welcomed me with open arms, we’ve been putting in the work and it has been my pleasure to work with Curtis. I loved every second of it. I think you’re going to see that on Saturday.” 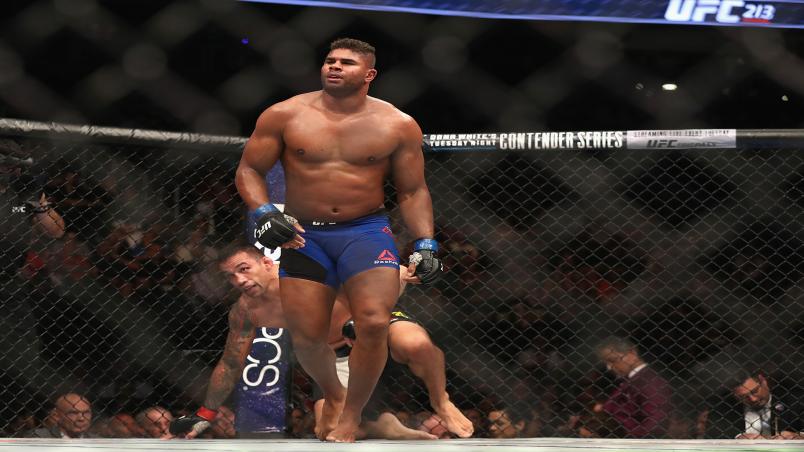 LAS VEGAS, NV - JULY 08: (R-L) Alistair Overeem of the Netherlands heads to his corner after facing Fabricio Werdum of Brazil in their heavyweight bout during the UFC 213 event at T-Mobile Arena on July 8, 2017 in Las Vegas, Nevada. (Photo by Christian Petersen/Zuffa LLC/Zuffa LLC via Getty Images)

LAS VEGAS, NV - JULY 08: (R-L) Alistair Overeem of the Netherlands heads to his corner after facing Fabricio Werdum of Brazil in their heavyweight bout during the UFC 213 event at T-Mobile Arena on July 8, 2017 in Las Vegas, Nevada. (Photo by Christian Pe

Just as musicians re-invent themselves at different times, so too do fighters, and with each shift in training camp, each different chapter of his career, Overeem has done the same.

He arrived in the UFC as a wrecking machine, all forward pressure and explosive power, before a rough four-fight stretch prompted changes.

Working with the team at Jackson-Wink MMA birthed a more patient fighter, one who stayed on the outside, biding his time until the opportunity to close the distance and connect with force presented itself.

Now, his back-to-back losses to Ngannou and Blaydes have brought about another shift and new changes that the veteran competitor is excited to debut this weekend in Beijing, but is keeping under wraps until fight night.