With a New Team and a Homecoming Bout, Barboza's Back 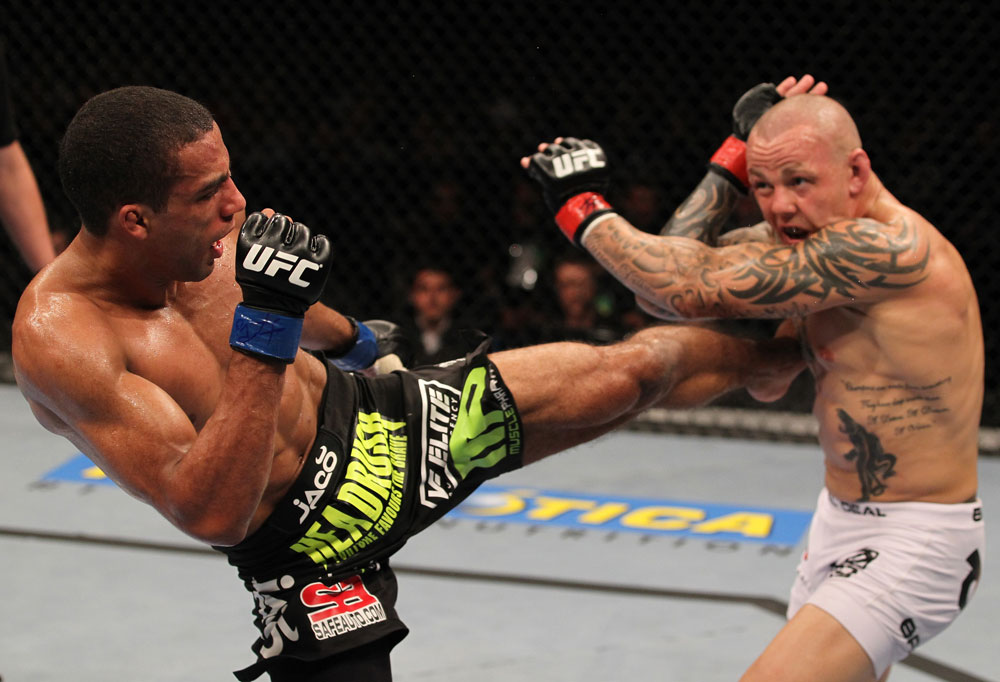 January in Brazil. It’s got a nice ring to it for UFC lightweight Edson Barboza. Not only is he returning to his home country to fight this Saturday against Lucas Martins, but he’s doing it 12 months after a victory that earned him accolade on top of accolade.

“I don't know, maybe so,” said Barboza. “My goal is doing great fights. If I get the Knockout of the Year again, that would be great.”

It would also speed up the healing process from the next fight on Barboza’s 2012 slate, a May defeat at the hands of Jamie Varner that earned the Brazilian another place on the end of year awards lists – this time as the victim of one of the most shocking upsets. Yet while the first round stoppage was a disappointing one that pinned the first loss on his record, he didn’t let it sit with him for long.

“As soon as the fight was over I came to my manager and asked for a fight,” said Barboza, now 10-1, who has no excuses for the loss to the resurgent former WEC champion.

“It's a fight and I don't want to give excuses,” he said. “It happened. After that I could watch my mistakes, see what I was doing wrong.”

And when the mourning period was over, what he realized is that he needed a change of scenery. Luckily, that opportunity soon presented itself when he was asked to help prepare former UFC lightweight champion Frankie Edgar for his UFC 150 bout with Benson Henderson last summer.

“After my last fight, I was able to realize that a lot of things were going wrong,” said Barboza, a native of Nova Friburgo. “At this time, Frankie's manager contacted my manager, asking to bring me for Frankie's training for his fight against Ben Henderson. I came up for two weeks, and after my training here I just thought about staying in New Jersey and training with the guys here. They are great people, they have an awesome training camp, and since the first time we met each other, we had an excellent relationship.

“With these coaches up here - Mark Henry, Ricardo Almeida, Renzo (Gracie), Frankie and the other guys from wresting and strength and conditioning training - I was able to find what I was missing in my training in Florida,” he continues. “Frankie is from wrestling and I am from Muay Thai, so our games are perfect to help out each other and I am always learning something new during my camp. I can say that I found the right people, the right training and everything happened at the right time. I am really feeling blessed to be part of this team.”

Add in his longtime Muay Thai master Anderson Franca and fellow standout Marlon Moraes, and Barboza now has the best of all worlds up the east coast. Sure, the weather in winter isn’t great, but if you talk to anyone on the Gracie / Almeida squad, it’s clear that this isn’t just a fight team; it’s a family affair for the folks from the New York / New Jersey area. And for Barboza, that was a strong factor in his decision making process.

“That was the first thing I realized up here, and that's one of the reasons I changed my training camp to here,” he said. “It's great. We can trust each other and we can talk about everything at any time. We are always talking to each other about the upcoming fights, we are always helping each other, and it's really an awesome energy.”

Now it’s time to bring that energy to Sao Paulo for this Saturday’s fight. Originally scheduled to face Justin Salas, Barboza got a change in opponent when Salas was injured. In now for the UFC on FX 7 lightweight bout is unbeaten Minas Gerais newcomer Lucas Martins. And though any change of opponent can throw off a game plan, in this case it may be a positive thing, as Barboza goes from a wrestling-based fighter to a fellow Muay Thai striker, and if the 26-year-old knows about anything, it’s Muay Thai.

“My strategy changed completely, but my training continued hard as always,” he said of the switch in opponents. “I kept training everything hard, doing as much jiu-jitsu as wrestling, Muay Thai, and boxing. It's hard to say about good matches when we are talking about fights because anything can happen. I just want to fight. I don't care if the guy is from wrestling or Muay Thai, I want to fight.”

But after compiling a 25-3 (22 knockouts) Muay Thai record, isn’t there the temptation to want to test that part of your game against someone who claims the same background?

It’s the first step in the return of one of the sport’s brightest young stars, and while he’s not promising highlight reel knockouts, he may just deliver one when he promises his fans to “expect the best of Edson Barboza.”