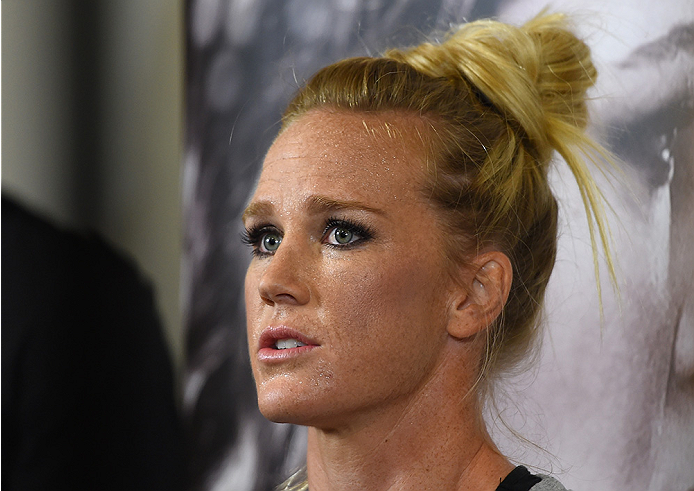 Some will admit it, some won’t, but it may be safe to say that every professional boxer, if only for one fight, would like to hit someone with the four-ounce gloves UFC fighters wear. Holly Holm would agree, but when the former multi-division world boxing champ made the move to mixed martial arts, she found a new love.

“It’s fun,” she said of the whole four-ounce glove thing. “But not only that; it’s also kicking. Sometimes, it’s like ‘man, they’re out of range to punch; I just kind of want to kick you.’”

Holm laughs, and you wonder how much different some of her biggest boxing matches would have been if she was able to swing a roundhouse kick to the head. But now she gets that chance, with her UFC debut this Saturday against Raquel Pennington one of the most highly-anticipated in some time. She knows it too, even though being in the UFC 184 co-main event and even getting a spot in EA Sports’ UFC video game isn’t exactly how she pictured things going.

“I do want to get in there and just get that first fight in the UFC,” she said. “In my mind, that’s all I’m really focused on, just performing. I’m really trying to not get distracted by all this other stuff. It’s very flattering that everybody has faith in me that I’m going to do great things, and that’s why I’ve been put in these positions. But the stressful part is that without being able to prove myself yet, it does create a lot of anxiety for me. I want to be able to get in there and perform well. I don’t want to be a letdown for anybody.”
After saying this, she talks of the expectations of the UFC, her manager Lenny Fresquez and her coach Mike Winkeljohn, who she still calls Mr. Winkeljohn. It’s probably the most unselfish thing you’ve ever heard from a fighter, and that’s part of the charm of “The Preacher’s Daughter.” The other part? The things she can do with gloves on.

Owner of a 33-2-3 boxing record that includes several world title belts and wins over the likes of Christy Martin, Mia St. John, Jane Couch, Chevelle Hallback, Belinda Laracuente, Mary Jo Sanders, Anne Sophie Mathis, and Diana Prazak, just to name a few, Holm spent much of her career in the sweet science on the pound-for-pound list, and when the history of the sport is written a hundred years from now, she will have a place on the list as one of the best ever. But in boxing, no one’s career lasts forever, and Holm is no exception. Where she did break the mold is by leaving on top, which she did after a May 2013 win over Mary McGee.

By that time, Albuquerque’s Holm had already been dabbling in mixed martial arts, making her pro debut in 2011. This was little surprise since she was working in the famed Jackson / Winkeljohn MMA gym, but as she got more into her new sport, she was starting to lose enthusiasm for the one where she made her name.

“In 2011, when I had MMA and boxing, my mind was set on being a champion in both, because no fighter has done that, male or female,” she recalled. “And that’s where my excitement was. I thought, I’m gonna do both. I had an MMA fight, then a boxing fight, MMA, then boxing. And that last boxing fight in December (of 2011) was when I got knocked out (by Anne Sophie Mathis). Before that fight, I thought if I win this fight and then I go and fight (current pound-for-pound queen) Cecilia (Braekhus), that would have been the pinnacle of it, and maybe after that I could completely be done with boxing and feel complete with it.”

She pauses before continuing.

“That’s what I get for looking too far ahead.”

Holm could have walked away then and pursued MMA full-time, but as a fighter through and through, there was unfinished business to take care of first. There would be no MMA in 2012, as she avenged the loss to Mathis and then picked up two more titles in defeating highly-regarded Diana Prazak.

“I was already starting to miss MMA,” Holm admitted, but with talk about a Braekhus fight heating up, she wasn’t ready to put down her boxing gloves yet. In early 2013, negotiations for the Superfight broke down, and Holm took an MMA fight, stopping Katie Merrill in two rounds in February. 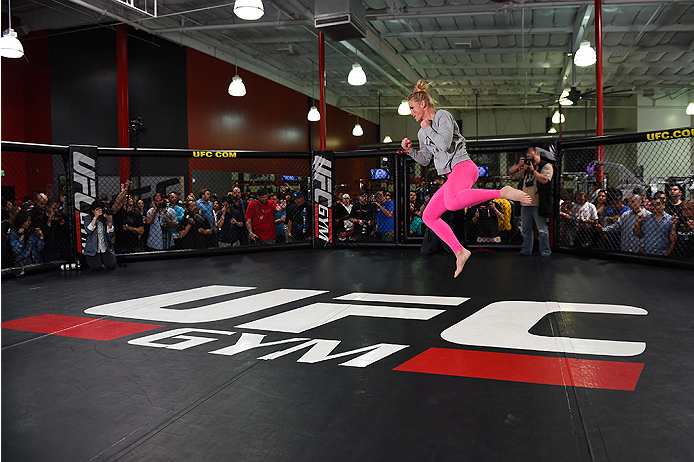 By then, she was feeling “all-in” when it came to MMA, but she still agreed to the May fight with McGee. She entered the gym for her first day of camp and was miserable. She spoke to Winkeljohn, telling him “I have no desire to box anymore.”

The win over McGee would be her last boxing match.

“Honestly, I don’t miss it,” Holm said. “I always said that I’m only going to fight as long as I’m passionate about it. And the minute that I didn’t feel that there, I knew I was done.”

The 33-year-old didn’t stay on the shelf long, running off three more MMA wins in 2013 and another victory in April of 2014. Then the UFC came calling, and here she is, two days away from her Octagon debut. And while fans of MMA know of her boxing background, the funny thing is that if you Google her name, most of the opening links are about her new sport, not her old one.

“I was just talking about that with some of my friends,” she laughs. “We were Googling something and all these highlights came up and it’s all my kicks and my MMA fights, and there’s nothing to do with boxing. This is when you know that the path has changed, and I just want to make the most of this direction. Maybe it’s good for me because I can really focus on where we’re at now and not live in the past and be content with it. I want to still be getting better and driving to be better. I’m in a whole new game here. I have so much to learn and I don’t want to be content with ‘well, I made it one time.’ I want to keep pushing to do more.”
> Check out the full UFC 184: Rousey vs. Zingano fight card