"This match I’ve got is good because the stylistic matchup means it’s a fight for him to show his worth, but it’s also a fight for me to show I mean business." - Rick Story 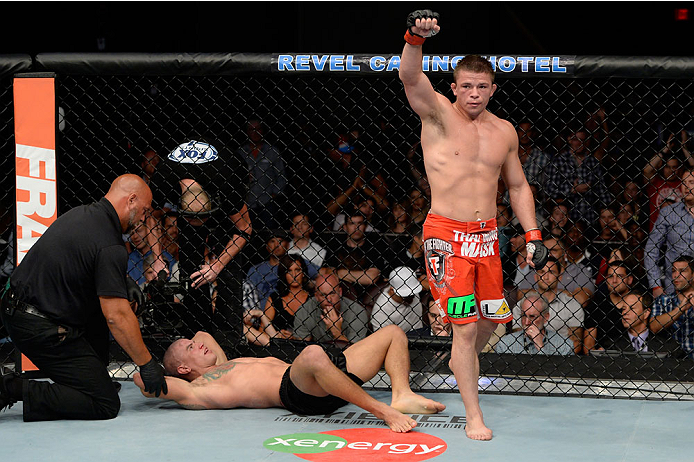 You’ve heard it all before. A fighter has some mixed results in his training camp, switches things up, and all of a sudden he’s a new fighter. It’s as cliché as it comes, but in the case of Rick Story, it’s not only true, but in addition to the fighting benefits of his move to The MMA Lab in Arizona, he’s a lot happier these days too.

“I should have changed camps sooner rather than later, but I didn’t,” Story, a former member of the Brave Legion team in Vancouver, Washington, said. “I feel like things are going to be a lot different now. I was on a quick rise and then I got depleted. Now I’m going to win because I want to win and because it’s fun, not because of outside pressures.”

How much fun? Story found out how life was on the other side in July, when he bounced back from a hard-fought loss to Kelvin Gastelum with a second-round submission victory over Leonardo Mafra. It was one of the best performances of the 30-year-old’s career, which is saying a lot considering that his career includes wins over Johny Hendricks, Thiago Alves, and Jake Ellenberger.

But in this sport, there is no time to take a victory lap, so Story got a call soon after to step back into the Octagon, and on October 4 in Stockholm, he’ll get the kind of opportunity all fighters crave – a headlining gig against unbeaten phenom Gunnar Nelson.

“When I got the call for this fight I thought it was awesome,” Story said. “This is the right fight at the right time for me. To fight someone like Gunnar, who is making a very fast rise, this is a good opportunity for me.”

Unbeaten in 14 pro fights, Nelson is riding high as well from a July victory, as he submitted Zak Cummings in Dublin last month. And though some veterans might shy away from a fight against a fighter with the ability to turn any fight into a highlight reel moment for himself, Story isn’t built that way. He sees the positives these days, not the negatives.

“This match I’ve got is good because the stylistic matchup means it’s a fight for him to show his worth, but it’s also a fight for me to show I mean business,” said Story. “We’ve both got something to prove in this fight, and I can’t even put into words how great this fight is going to be. He’s got a great ground game, he pushes the pace and he doesn’t fade. That’s the kind of fight that I love.”

That’s the sound of legitimate excitement you hear from Story, who won’t make predictions on October 4th but who will – like he always has – show up to fight.

“I’m taking it one fight at a time, and I’m focusing on this fight only,” he said. “Then whatever happens after that will come in time. I’m sure if I go in and perform I’ll make a statement.”

Tickets for UFC Stockholm, which takes place at the Ericsson Globe Arena on Saturday, October 4, are on sale now. To purchase tickets, click here