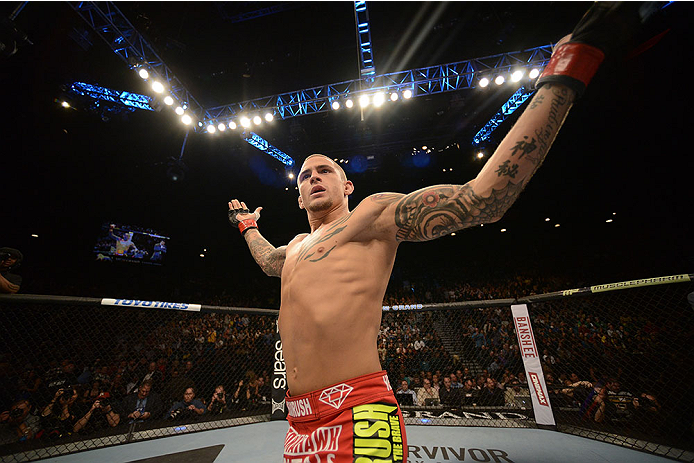 There’s a spring in Dustin Poirier’s step as he bounces around the American Top Team training facility in Coconut Creek, Florida. It’s not so much because he will finally be facing Irishman Joe Duffy at UFC 195 on Jan. 2 (the two were originally scheduled to face each other in October in Ireland before Duffy had to withdraw), but mostly because he feels good these days.

You see, it’s much easier to make 155 pounds than it is to make featherweight at 145 pounds.

“I’m feeling great,” he said. “Everything is right on track.”

If it sounds like the Lafayette, Louisiana native is focused on his lack of a weight cut and isn’t focused on Duffy – the last fighter to beat current featherweight champion Conor McGregor - then you don’t know Poirier at all.

“Oh, I’m ready for Joe alright,” he said. “I love this part of the game, when all eyes are on my opponent and all the media is heaping praise on the next guy, because then I get to spoil his party. That’s always my goal - to go out there and beat somebody up and make them fall short of what they’re trying to do. Because they’re trying to do the same to me.”
More on UFC 195: Ageless Lawler enjoying career resurgence | Title shot decade in making for Condit | Watch Countdown: Lawler vs. Condit | Inside the numbers for Lawler vs. Condit | Arlovski making most of 2nd run | Watch Countdown: Miocic vs. Arlovski | UFC 195 fight card | Reasons to watch UFC 195 | Stage bigger, but Irish Joe stays humble | 'Hot sauce' living the dream | Moment arrives for Larkin | Kish brings experience into her UFC debut | Pre-order UFC 195 digitally | Buy tickets for UFC 195 | Watch UFC 195 Embedded: Episode 1, Episode 2
It’s not a game – this UFC thing that the 26-year-old had embarked on some five years ago. But to hear him tell it, it’s not quite a job either, even though it’s how he pays his bills.

“If I hit the lottery today and won $500 million, I would still fight this year and I would still fight next year,” he says. “This is what I do. I love fighting and I love the sport. So that’s why it’s so easy for me to do it, because I love it. If you feel like you’re clocking in when you go to the gym, this will burn you out and eat you up, man.”

So while he takes what he does seriously, he has a healthy outlook on it. Today, Poirier is more concerned with the mental aspect of mixed martial arts. He has been in big fights before, most notably with McGregor and Chan Sung Jung, aka “The Korean Zombie,” and he’s won some and lost some. And for those losses, he takes full responsibility.

“Now that I’m at 155 I can always say that the weight cut was my biggest challenge when I was fighting at featherweight, but it’s not like that had anything to do with Conor McGregor knocking me out,” he said. “He hit me with a good shot. It hurt me, and then he pounced right on me and put me away. He just fought a good fight that night. I’m sure the weight cut didn’t help, but I don’t think that was because of the weight cut.”

Duffy is an excellent boxer, and Poirier prepared for him by doing multiple sparring sessions with his boxing coach Dyah Davis, a super middleweight who is still an active fighter himself. Poirier feels that he is better everywhere.

“His (Duffy’s) boxing is his greatest strength, and he has decent jiu-jitsu, but I train at American Top Team. There are so many professional fighters here that I don’t have to bring in anyone special in order to emulate anyone. We have guys here who can simulate any opponent at every weight class,” he said.

One of the most memorable Poirier quotes came after he dispatched Pablo Garza by way of a second-round submission in November of 2011. At the time, he said he was “A young kid with grown man problems.” Today, it’s safe to say the problems may be the same, but he’s no longer a kid.

“I agree with that,” he said. “My wife is my best friend. We’ve been together a long, long time, so everything I do, I do knowing that I have her full support, and together we are an amazing team. When I moved to Florida I did so not because I wasn’t getting good training in Louisiana, but we made do with what we had. In this business, you have to keep evolving, but even as you’re fighting and your mental game improves, the outside world is always going to be there to pose challenges and be a distraction. I’m lucky to have Jolie to help me in that aspect of my life.”

In the fight game, 26 years old can mark an eternity, and Poirier not only fights like a man who has been doing this for much longer than he has, but he sounds like an old soul. Chalk it up to his Southern upbringing or his solid work ethic, but know that come UFC 195 in Las Vegas, “The Diamond” is looking to shine once again, spoil yet another man’s night, and send him to the back of the line in the process, like he’s done so many times before.

“I’ve been at the back of the line myself,” he says. “So I don’t mind sending him back there.”