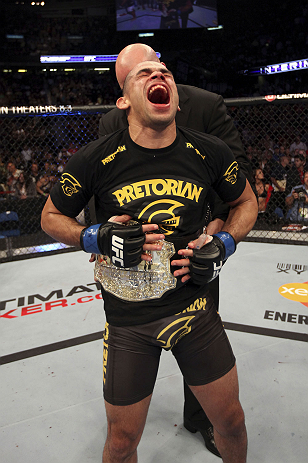 The newest Brazilian to become a UFC champion, interim bantamweight titleholder Renan Barão, got to see the other side of life as a UFC star, as he was the undisputed center of attention at a media event held Tuesday at the Rodrigo de Freitas Lagoon in Rio de Janeiro.

This exposure with the media was something that the fighter expected, because in the weeks before his duel for the title against Urijah Faber at UFC 149 last Saturday, Barão had already tasted a bit of the commitments he would have as a champion.

Interviews with web sites, magazines and newspapers would have their volume increased to more than triple, and that was confirmed when Barão, who, while a little embarrassed, answered every reporter at the event today. Still, he was caught by surprise with the amount of new fans and the increased demands of those who already knew him for some time.

In addition to his commitments with the media, Barão gave attention to every one of his followers. Answering several questions and taking photos, Barão realized that his status as a UFC fighter has been updated to idol in just over one year working in the organization. And Barão is more than willing to become as good at these matters as he is with his performances in the Octagon.

"We train to reach the highest point [be a champion], and the consequence is what we're seeing," said Barão. "Having this recognition is fantastic and I hope that more and more I exceed the expectations of my fans and get many others from now on."

If his dominant win over Faber is any indication, the idea of Barao extending his reign is a promising one. Unbeaten in his last 32 fights, the interim champion has showed plenty of versatility in all four of his UFC fights since May of 2011. Dispatching former WEC champion Cole Escovedo, British star Brad Pickett, former WEC title challenger Scott Jorgensen, and finally Faber, Barão's next step   is to return to his native Rio Grande do Norte at the beginning of next week. In the Octagon, there is nothing definite yet, as the unification against champion Dominick Cruz depends on the Californian’s recovery from a knee injury. This wait opens a spot for Barao to possibly defend his interim belt.

“I’ll fight whoever the president determines, whether it’s defending my title or unifying it against Cruz. It depends only on what Dana White decides for me,” said Barao.