Donald Cerrone prefers actions to words and, right now, the perennial lightweight contender turned surging welterweight’s actions are making a lot of people rethink their assessments of the 33-year-old fighter a little over a year after everyone thought they had him all figured out.

A first-round loss to Rafael Dos Anjos in the final bout of 2015 brought Cerrone’s eight-fight, 25-month unbeaten streak to an abrupt halt and relegated the proprietor of the BMF Ranch to championship purgatory in the 155-pound ranks. Having twice fallen to the reigning champion – a unanimous decision defeat to Dos Anjos was the final setback before Cerrone’s lengthy run of success – the gunslinger in the sharp black hat figured he’d have a little fun, not cut as much weight and play around in the welterweight division while he waited to see how things shook out in his long-time stomping grounds.
RELATED CONTENT: Cowboy on Road to the Octagon | Cerrone - On Point | KO of the Week vs Rick Story

Beating fellow “Cowboy” Alex Oliveira in quick fashion didn’t raise many eyebrows, but stopping former middleweight title challenger Patrick Cote and thoroughly outclassing the French-Canadian veteran in Ottawa made more than a few people sit up and take notice. Two months later, Cerrone rolled into the cage at UFC 202 and unleashed a combo straight out of Tekken on Rick Story, stopping the durable Pacific Northwest native two minutes into the second round to run his finishing streak to three.

Suddenly, Cerrone’s little vacation in the welterweight division was starting to look like a new lease on life and a move that brought out the best in the WEC holdover, who has been one of the most active and consistently entertaining fighters on the roster since debuting at UFC 126.

Back in December, “Cowboy” capped his first year in his new division with a third-round head kick finish of Matt Brown at UFC 206 in Toronto. Tensions between the two ran high heading into the contest, but even they couldn’t stay angry after 10 minutes of punishing one another in the cage, starting the final stanza with a shared smile and a high five in the center of the Octagon before getting back to the business of trading bombs.

Forty-five seconds in, Cerrone ended it, cementing himself in the welterweight Top 5 with his fourth consecutive win and putting himself in a position where one or two more victories could yield a title shot. 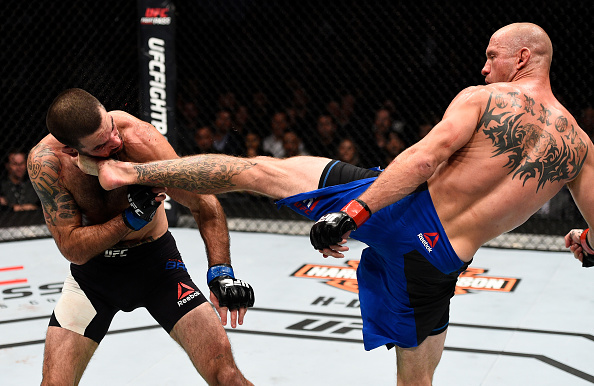 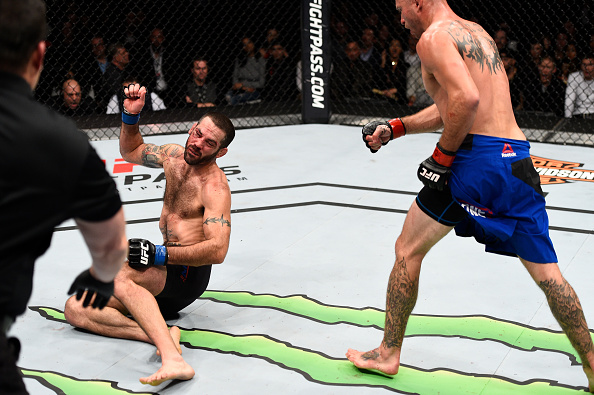 “It’s a good year; it was awesome,” Cerrone said Tuesday, asked to reflect on the previous 12 months prior to kicking off his 2017 campaign on Saturday against Jorge Masvidal. “Fighting often, that’s what I love.”

While most in his position would be careful about whom they signed up to fight next and take their time finding the “right time” before returning to the cage, Cerrone has always been an anomaly on that front, and with the UFC ticketed to return to Denver, Colorado, the willing combatant quickly made it known he wanted the chance to compete back home.

Cerrone spent his adolescence in Broomfield, Colorado with his grandmother and grandfather, whom he shares a name with. Always supportive, even during his reckless, troublesome days before fighting, Dr. Cerrone and Grandma Jerry were always their grandson’s biggest fans and while his grandfather passed on the night of his UFC debut, Grandma Jerry is an unmistakable presence on Fight Week when “Cowboy” is on the card.

Just look for the sweet older lady giving the professional fighter grief for turning the middle finger into a welcomed greeting, as she did in Ottawa two days before he stepped in with Cote.

Even for a fighter with a “have gun, will travel” mindset like Cerrone, the opportunity to fight close to home and make the trip nice and easy for his grandmother is still a big deal.

“This is a very special fight for me,” Cerrone said, pausing to gather his words. “I’m fighting at home. My grandmother doesn’t have to travel; she can just drive down the street and come watch me. The coaches are all in the other room hanging out with her right now.”

With a fight card in mind, all “Cowboy” needed to get his 2017 underway was a dance partner, and Masvidal made that part of things easy.

After earning a first-round victory over Jake Ellenberger in an early December in a bout where he took no damage and the fight ended awkwardly, “Gamebred” used his time on the microphone to issue a challenge to Cerrone, suggesting this weekend’s card in Denver as a perfect time to share the cage.

As you would expect, “Cowboy” was quick to accept, and the battle of the former lightweights currently making hay in the welterweight division was set.

“Naw man – I don’t think of it any other way,” Cerrone said when asked if getting called out and being “the hunted” adds any pep to his step as he prepares for his 41st professional MMA appearance. “He wants a big name fight, so he’s calling me out trying to get it, but be careful what you wish for, buddy.”

Given that the upper tier in the welterweight division is a little unsettled at the moment, earning a fifth straight win would put Cerrone on the short list of possible title challengers in the 170-pound ranks, a position that would prompt most competitors to step back, press pause and weigh their options, making sure to make the most of the opportunity before them.

“Line ‘em up. I’m trying to get on the March card,” he said in regards to what may come next should he emerge victorious on Saturday night. “When is that one – the one with the (Wonderboy)-Tyron fight? March 4?