A New Chapter Begins in Rio for Struve 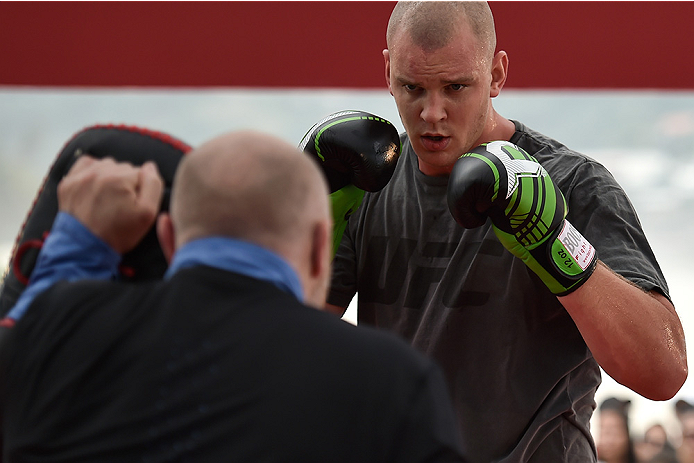 The official MMA record of Stefan Struve will always show his December 2014 bout against Alistair Overeem as a loss, but all defeats aren’t created equal.

Yes, Overeem stopped Struve in the first round of their heavyweight bout and there was no controversy about the finish and no complaints from the 27-year-old, but to those watching, it was a victory for the “Skyscraper,” simply because he made it back to the Octagon after a harrowing 21-month absence that began with the discovery of a leaking bicuspid aortic valve in his heart.

Medication got the condition under control, but a mix of that medication and the stress of the situation led him to pass out in the locker room moments before he was going to fight Matt Mitrione at UFC 175 in July of 2014. A switch in medications alleviated the issues, and he was back in action last December. Call that one a win, but being a true competitor, the loss still nags at Struve.

“The fight with Overeem, I had a really good training camp, there was nothing wrong with that,” he said. “But going into the cage, I wasn’t focused on fighting the way I should be. I was listening to my body too much, like how are my arms feeling, how are my legs feeling, how is my breathing going? The only thing I was afraid of was to get tired in that cage. At other times fighting in the past, it was like I was fighting with a big rock on my chest, and if I could finally push through that, if I wasn’t sick like in the Mark Hunt fight, I would put that aside and then I would fight my fight and pretty much all of the time my opponents couldn’t hang with the level I brought. But the last time, I just didn’t get going. There was too much doubt. I wasn’t fighting to my potential because of that.”

Those days are gone. The “big rock” on his chest is gone, the doubt removed from his head. Now it’s time to fulfill that potential in a division where he is still the young gun, the only fighter in the heavyweight top 15 under the age of 30. And to start off this new chapter in his career, he prepared for Saturday’s UFC 190 bout against Minotauro Nogueira in south Florida with the Blackzilians team.

“I’m loving it here,” Struve said. “Life in Florida is not bad at all, and training has been excellent, so it’s everything I could wish for. I had a disappointing last performance, so I finally decided it was time to make the move here. I had some issues in the last couple years that made it hard for me to spend a lot of time outside of Holland, but right now everything is going the way it should go, and it really feels like it’s the right time to make that step and I really see a lot of improvement in my game.”

Don’t worry, old school fight fans, “Dirty” Bob Schrijber will still be manning the corner for Struve on fight night, but the change in scenery for camp has done the Netherlands native good.

“Switching up training is always good to get going and get motivated,” Struve said. “Some of the aspects of MMA you can’t train them as well in Holland. The wrestling is a lot better here, and a couple other aspects as well, so there were a lot of improvements, and I love Florida. It’s a great place to be. Holland’s got a lot of rain, so the weather makes it a lot easier to train. (Laughs) You get up easier and it just motivates me more. The total picture here is just perfect for me.”

From the beaches of Florida, Struve now travels to the beaches of Rio de Janeiro, or at least close to them for Saturday’s bout at the HSBC Arena where the popular heavyweight will likely be booed when he faces Brazilian icon Nogueira, one of the most beloved fighters to ever grace the Octagon or ring. Struve knows what he’s in for, and that’s okay.

“It’s going to be something different,” he said. “I don’t think I’ve ever been in such hostile territory, but I’m looking forward to it. It’s going to be a great experience for me to feel that and see that and, in the end, I’m fighting just one guy.”

Of course that one guy is the former PRIDE and UFC heavyweight champion, and someone Struve lists on his UFC bio (along with Fedor Emelianenko and his coaches on Team Schrijber) as one of his favorite fighters. But Struve is putting that all aside, knowing that with a win, he begins his road to the top once more.

“I’ve been watching his fights since my early teenage years, so it’s amazing to fight him,” Struve said of Nogueira. “But I’ve been fighting guys on the highest levels for years now, and I think I could have done a lot better if I knew about the condition I had and treated it from the beginning. It’s not only going into the cage with a heart that’s only got 60-percent output, it’s doing an entire training camp with it. So I don’t care who I fight, because he’s just another guy in my way and I just need to prove that I’m one of the best heavyweights in the world. I’m the only ranked heavyweight in his 20s, so I’m the guy who’s going to take over in a little bit, and I really, really believe that. I’m confident and relaxed, and I need to fight to my potential. If I do that, it’s going to be a long night for Nogueira.”