"The welterweight division is full of great, dangerous fighters. I’m working really hard to became one of them and get to the
top." - Omari Akhmedov 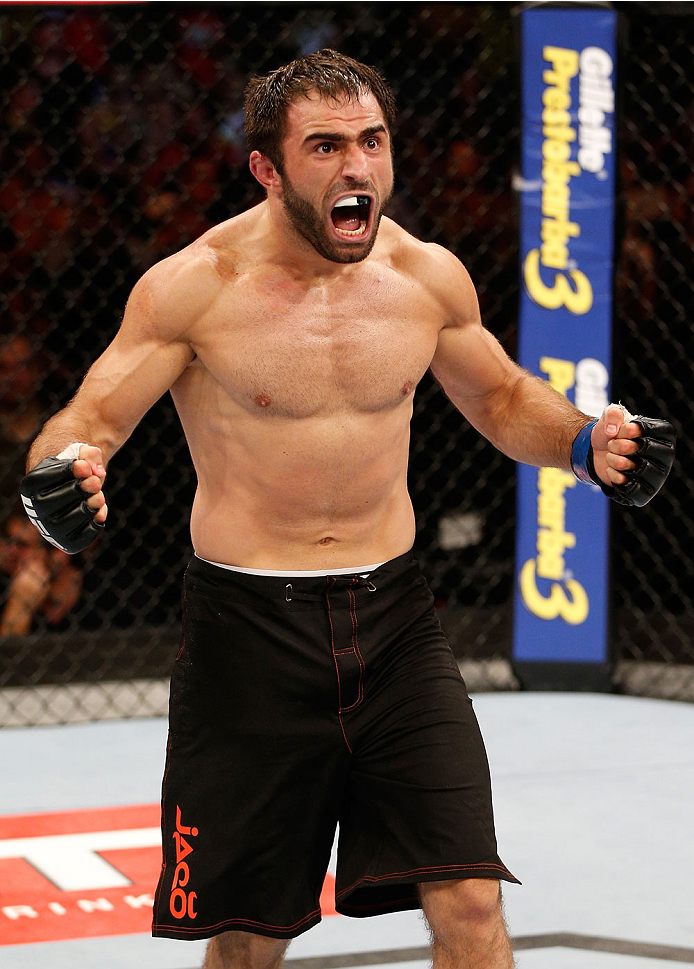 After walking away from his UFC debut against Thiago Perpetuo not just with a win in his opponent’s backyard of Brazil, but a knockout and a Fight of the Night bonus as well, you could excuse Omari Akhmedov for being a little cocky, proclaiming that everything went precisely according to plan. But the Dagestan native is as honest as he was impressive in his first Octagon bout.

“I was nervous,” he said through manager / translator Rizvan Magomedov. “That was my debut in the UFC, and my first time in such a high-level promotion. Fighting in front of thousands of people and the cameras scared me a little, but I went through it. I'm happy it ended up this way; I got a knockout victory and extra money in my pocket.”

He also made the type of impression that was impossible to ignore. The latest in the run of Russian fighters taking over the UFC, Akhmedov showed that he had skill, grit, and power in the fight with Perpetuo, shaking off some rough moments to roar back and stop the Brazilian. It was his 11th finish out of 13 wins (against only one loss), a run of destruction that he humbly describes as such: “I just walk into the Octagon to fight and I take it as it comes.”

And even though his ability to knock out and submit opponents served him well at 185 pounds, for his return this Saturday against Iceland’s Gunnar Nelson, he will be doing so as a welterweight.

“I was too small for the middleweights,” said the 26-year-old. “My natural weight is 86kg (189 pounds). High-level fighters cut too much weight, so at the fight day, after weigh in, they became way bigger and heavier than me. That's why I decided to move down.”

Even before the opening bell against Nelson, Akhmedov already notices the difference, saying, “I got faster and it’s easier to move. I’m feeling much better.”

Probably not what Nelson or the welterweights want to hear, but again, Akhmedov is honest in the lead-up to the bout, as he is taking the grappling wizard very seriously.

“Gunnar is world-class grappler, so it's dangerous to play with him on the ground, and he has that unorthodox karate style, so that could be confusing as well,” he said.

Yet if anyone can figure it out, you guess it’s Akhmedov, a Master of Sports in hand-to-hand combat and combat sambo who has five wins by submission to go with his six by knockout. It’s a resume similar to those of his Russia peers, and he’s probably not the last to emerge from the nation.

“Every day MMA is becoming more and more popular in Russia, so that's the logical consequence,” he said. “As the challenges get harder, fighters come out stronger.”

There will be plenty of challenges ahead for Akhmedov at 170 pounds, but he’s ready and waiting for them.

“The welterweight division is full of great, dangerous fighters,” he said. “I’m working really hard to became one of them and get to the top.”