Tyron Woodley erupted onto the scene with one massive overhand right, destroying champion Robbie Lawler by knockout at UFC 201 in July.

The result was the fastest finish in UFC welterweight history. Woodley was off for 18 months before that fight – improving and plotting.

“I felt like I was just a thief in the night. Nobody saw any footage of me fighting or what I was working on,” Woodley said Wednesday during a UFC 205 media call.

Woodley, who defends his welterweight championship against Stephen “Wonderboy” Thompson in the co-main event of UFC 205, wanted to fight during that span of inactivity. But the “The Chosen One” was forced to wait when Johny Hendricks pulled out the week of their scheduled bout in October 2015, and Woodley was promised an eventual title shot.

So he waited for the dream fight and capitalized on the opportunity. But his title fight only lasted two minutes, and Woodley still feels like fans are going to see a new and improved T-Wood in New York City.

“You’ve still not been able to see what I’ve been working on and that’s my little ace in the hole that I plan on taking into all my fights,” Woodley said. 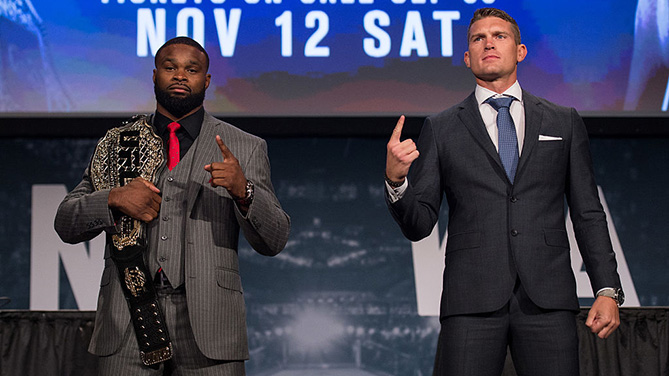 Thompson is actually the betting favorite against Woodley. The former kickboxer has won seven in a row and four of those wins have been by knockout.

The striking specialist knows Woodley, a decorated wrestler, will try to take him down eventually, despite any moderations or improvements the champion has made to his game. But “Wonderboy” is ready for that tactic.

“I’ve been working on my wrestling tremendously. Chris Weidman and Olympic wrestler Matt Miller have been coming down to help me with my fights ever since the (Patrick) Cote fight,” he said. “I’m just improving on it every day. I feel like I came into the game late in 2010 and I think I’ve made leaps and bounds with my takedown defense.”