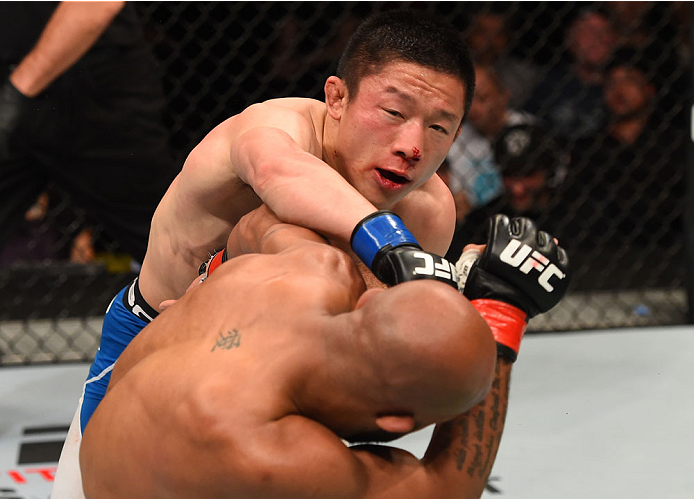 Coming out on the losing end of a fight isn’t something that sits very well with Kyoji Horiguchi.

Going into his bout with dominant flyweight champion and top-ranked pound-for-pound fighter Demetrious Johnson at UFC 186 back in April, defeat was something the Tokyo product hadn’t tasted in more than three years. During that time, the Kid Yamamoto protégé had not only racked up a lengthy collection of victories in impressive fashion, but he did so with performances that expedited his rise to the elite tier of the 125-pound range.

Working behind a versatile attack where his speed was by and large the difference maker, Horiguchi tore through his initial three opponents under the UFC banner, and received the call to fight “Mighty Mouse” with the 125-pound division’s strap on the line. At just 24 years old, Horiguchi was on the cusp of solidifying himself as the top flyweight in mixed martial arts, but things wouldn’t shake out in his favor in Montreal.

Throughout the course of the five-round affair, Johnson simply proved to be a step ahead in every facet of the game, and when Horiguchi tapped with one second remaining in the bout courtesy of the defending champion’s armbar, the fate of his first attempt at a UFC title was sealed. Yet despite the lingering sting of having stumbled in the biggest opportunity of his career, Horiguchi refused to focus on the negatives of the situation at hand.

Ever the student, he absorbed the experience earned from competing in the unique environment a title fight inside the Octagon provides, and immediately set about making the adjustments necessary in his overall game. He saw and felt something entirely different that night at UFC 186, and every step he takes back toward the top of the division will be done with his improvement and dominance in mind.

“It was a great experience for me to seek the flyweight title since it gave me a great hint of what I will have to do to get it done,” Horiguchi said. “I now know there is a different degree of attention between the champion and the rest of the fighters in this game. I believe I can be the champion and I am putting more effort into my grappling and my stand-up games to make sure I’m better every time I step into the Octagon.

“Of course I am seeking the title again,” he added. “But I have to put my focus on my next fight coming up.”

With Horiguchi’s title hopes still very much alive, he’ll have the opportunity to spark another campaign on Saturday night when he faces seasoned veteran Chico Camus at UFC Fight Night: Barnett vs. Nelson. The Duke Roufus-trained fighter is also coming off a loss in his most recent showing, and just like Horiguchi, he will be eager to stamp himself back into the win column.

When their fast-paced styles are factored into their ambitions to climb the divisional ladder, it sets the stage for what should be a shootout in the flyweight ranks in Saitama, Japan. Horiguchi has no intention of letting his countrymen down, and he hopes his performance will simply be one great element of what turns out to be a great night for the resurgence of Japanese MMA on the world’s stage.

“I am very pleased to fight in front of everyone that has always shown me so much support,” Horiguchi said. “I think MMA in Japan has been creating good momentum, and I hope to see the crowds for UFC Japan get bigger and bigger with each and every show.

“I think this is a great matchup for me and will be exciting for fans to watch. I want people to pay attention to my speed and aggression in this fight because I believe it will make the difference and be the keys to my victory. I am hoping to go out there and knock him out.”

While Horiguchi acknowledges the tweaks he needs to make in his overall game in order to contend for the divisional strap once again, he also sees elements in his approach beyond the Octagon that will help him increase in popularity. Being an international fighter during the UFC’s global push has certainly helped him create a foothold, but with the heart of the promotion’s market being located in the United States, Horiguchi knows that there is still work to be done to reach the UFC’s passionate fan base.

There is only so much he can prove with his performances inside the cage, and he plans to do whatever it takes to make sure fans know him and want to see him fight again and again. If that means tackling a new language in order to make sure that happens, then so be it, because Horiguchi is determined to make a huge impact with the UFC’s fans around the globe.

“I am very happy to be part of the UFC and get to fight for the largest MMA organization in the world,” Horiguchi said. “I’m truly honored and want all the fans to enjoy my fights. I feel I will need to learn English in order to do that, and it is something I am working on.”