"The New Akiyama" to be Unveiled in Japan This Weekend

"I have wished for this (fighting in a UFC bout in Japan), and it’s really great to realize it while I'm an active fighter." - Yoshihiro Akiyama 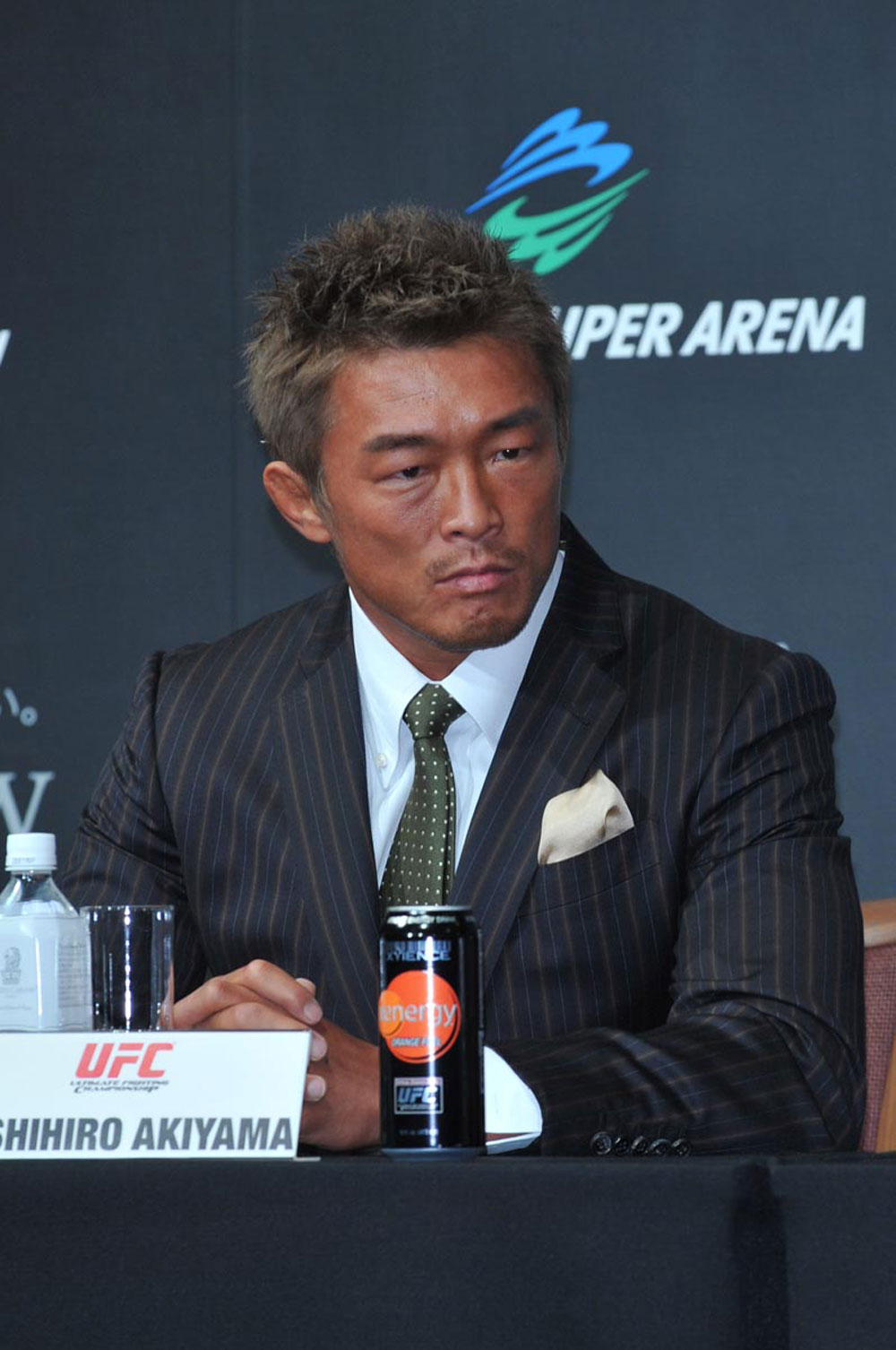 America has always been seen as the land of second chances, a place where what happened before can be forgotten in the space of a change of scenery or philosophy, or when it comes to sports, one good performance. On Saturday night, Yoshihiro Akiyama gets his second chance, but he will be getting it in his home country of Japan, as he looks to break a three fight losing streak in a new weight class - welterweight – against Jake Shields.

For the 36-year old Osaka native, there is no sense that he is on the tail end of a career that made him a legit superstar at home, only the positive reinforcement that in and out of the Octagon, he is a new man.

And in many ways he is. After losing to big middleweights Chris Leben, Michael Bisping, and Vitor Belfort, his move to the 170-pound weight class finally took place after the Belfort bout last August. And ‘finally’ is the operative word here, because for years, fight game observers believed that Akiyama was better suited for the welterweight division. Then again, when you’re having success like he did for much of his career (plus he also opened up his MMA career with bouts against heavyweights Frans Botha and Jerome Le Banner) dropping 15 pounds can not only be unpleasant, but seemingly unnecessary.

The knockout loss to Belfort convinced him though.

“I am not tall and big enough among other UFC fighters and decided to change to my "original" division,” said the 5-foot-11 Akiyama through translator Takashi Iizuka. It was at 81 kilograms (178 pounds) that Akiyama won numerous judo titles, and while he will retain the technical knowledge and gritty competitiveness that has marked his seven year MMA career, he’ll also be competing on a level physical playing field, and he believes that “I think that I could acquire more speed.”

Fast, strong, technically sound, and more than willing to bite down on his mouthpiece and get into a war, Akiyama - who described himself and his Japanese peers as “Samurai fighters” - could make an immediate impact in one of the sport’s toughest divisions.

“There are many good motivated fighters trying for the title, thus it’s a very competitive division,” said Akiyama, who is now throwing his hat in the ring with the rest of the contenders. One of those is former world title challenger Shields, who presents quite a different look from that of Akiyama’s UFC opponents thus far. But after 19 pro bouts, he is confident that he will not be seeing anything he hasn’t before.

“He is strong and tough fighter,” said Akiyama of Shields, who is looking to break a losing streak of his own this Saturday. “Every fighter has their own style and I have to deal with them.”

And if the two are equals going into the UFC 144 main card bout at Saitama Super Arena, what can matter most are the intangibles. And one of those intangibles is that Akiyama will have home Octagon advantage come fight night, something he is embracing.

“It’s wonderful opportunity,” he said. “I think that the fans will see the quality fighting and the magnificence of UFC. I hope this show will increase the number of MMA fans in Japan.”

That’s the big picture outlook; for Akiyama personally, fighting at home for the first time since submitting Masanori Tonooka in 2008 is something he hoped would happen before he decided to hang up the gloves.

“I have wished for this (fighting in a UFC bout in Japan), and it’s really great to realize it while I'm an active fighter,” said Akiyama, who will have several friends and family members in attendance this weekend. But the most important person in terms of motivating the longtime star is one who won’t be part of the cheering crowd: the four month old daughter he and wife Shiho welcomed into the world in October.

The proud father says his child “gives me another energy,” and with this energy, a new division, and a new lease on his career, Akiyama is more than ready to move forward.

“Changing my division, it would be great if the fans can see ‘The New Akiyama.’”