Nerves not a factor for Duffy on bright stage of MSG 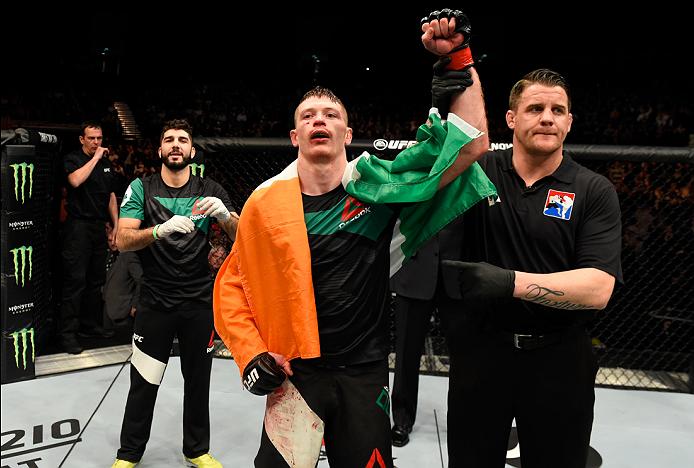 Like his future opponent James Vick, Ireland’s Joe Duffy doesn’t get rattled by much, if anything. So even though he’s fighting in Madison Square Garden on Saturday night in a bout that will likely earn him a spot in the top 15 at 155 pounds, he’s approaching it as just another work day.

“I train every week and I think when I go in to fight, it’s no different to training,” he said. “So I don’t build it up to be something it’s not. Obviously not everyone looks at it this way. Maybe it’s my personality, maybe it’s because I’ve been fighting since I was a youngster. Don’t get me wrong, when I get there on fight week, I’m as excited as anyone. But it’s mostly excitement. Very rarely is it nerves or pressure or anything else.”

That approach has led the 29-year-old to a stellar 16-2 record that includes four UFC victories. But to get it, you have to go back to Donegal and hear about the lessons Duffy learned even before he put the gloves on.

“My dad grew up on an island off the mainland,” he said. “He didn’t have a pair of shoes until he was about seven, he barely had any school, and he was working on a fishing boat by the age of 12. My family is no strangers to hard work, and I’ve been brought up with that mentality. Whatever you want, you’ve got to go for and you work your ass towards it and you take chances. You do it, you don’t look back and whatever the results, you get on with it.”

That’s why Duffy left Ireland to move to Montreal and train with the Tristar squad. At first it was a back and forth thing, but eventually, he and his girlfriend made it a full-time endeavor. As far as the lightweight prospect is concerned, that’s part of becoming a contender and eventually a champion – the willingness to do the things most won’t.

“Moving away from home was a big sacrifice, but sacrifices have to be made and anyone who is trying to achieve their goal has made these sacrifices,” he said. “So I’m never gonna look back and say I wish I had done this or done that. I need to go at it and give it a hundred percent and, touch wood, I’ll get where I want to be.”

He has the talent, the drive, and the right people around him. Everything else comes down to what happens on fight night, and with a 4-1 UFC slate, he’s headed in the right direction as he prepares to face Vick in NYC with two of his teammates – Georges St-Pierre and Aiemann Zahabi – joining him on the UFC 217 card.

“There’s definitely been a different energy in the gym,” Duffy said. “Aiemann’s generally in my corner, but being able to fight alongside him, that’s something special for me. We’re really bouncing off each other and we’re really excited to get there and to fight. I haven’t had this feeling for a long time, going through all this with someone from the same team on the same time. Me and Arnie (Arnold Allen) had it on the last one, but it’s got a different feel to it with three of us on the card.”

In that last fight, Duffy, in the last fight of his contract, had a lot of pressure to deal with when he faced Reza Madadi. But when the heat is on, the special fighters step up, and he did just that with a unanimous decision victory in March.

“I knew how tough Madadi was and you mentally prepare for all this stuff,” said Duffy, who will be fighting the first fight of his new contract on Saturday night. “So it was nothing out of the ordinary. It was everything I expected and you don’t lose sight of what it is, why you’re training and what you’re gonna do. All the other stuff outside of it doesn’t really change any of that.”

So is this weekend just business as usual, or is it something more for “Irish” Joe?

“When you get to fight in all these big venues, the Garden especially and especially for Irish fighters, I feel there’s definitely something historic to fight there,” he said. “Obviously it’s a great fight, another tough fight and exciting prospect to fight against, so I’m excited by the challenge, by fighting on such a big card and fighting in the Garden. It’s all got a real special feel to it.”

But it’s still business because Duffy isn’t where he wants to be yet. When he gets there, maybe he’ll exhale a bit, but for now, it’s full speed ahead.

“Since I was a teenager, this is what I’ve been chasing,” he said. “I’ve been training all my life, and I remember at 12, 13 years old, when my teachers would ask what I wanted to do, I’d tell them I want to fight. This is what I wanted to do and I’ve been following it, and this is another step towards where I want to be, which is obviously that title. So I find it very easy to get motivated and stay motivated because I’m nowhere near where I want to be.”