Nelson: Preparing His Bag of Tricks for Maia 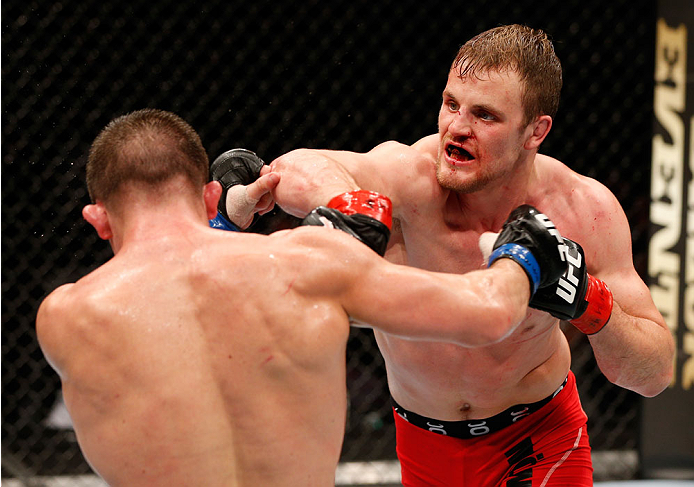 Everyone is looking forward to a grappling war between Gunnar Nelson and Demian Maia this Saturday night at UFC 194, but don’t be surprised if Iceland’s Nelson is more than agreeable to a stand-up battle.

“I don't think standing and trading is the way to go for any striking,” the karate brown belt said. “You have to pick your shots, counter shots, block shots. But I really like the striking aspect. I always did since I was young. That was the first thing I did and when I realized I couldn't grapple for s**t, I started doing that. (Laughs) And now I'm back to striking now as well.”

Nelson would go on to become a top grappler and black belt in Jiu-Jitsu, becoming so good on the ground that he is routinely described as the “submission guy.” But if you’re wondering where all the striking talk is coming from, look back to his July win over Brandon Thatch.

Now Thatch is the type of striker you want to take down, no matter who you are. Yet Nelson opted to stand, and while he eventually got his submission win in less than three minutes, it was his strikes that hurt and dropped Thatch and set up the submission. It was impressive stuff to say the least.

“It was a very good fight for me,” Nelson said. “I got to showcase my striking a little bit more and the hands definitely set the whole thing up, but the ground finished the work. I'm very happy with the performance.”

He should be, as that performance produced Nelson’s fifth victory in the UFC and fourth submission finish, and more importantly, it got “Gunni” back on the winning track after the first loss of his career against Rick Story in October of 2014. Now it’s back to looking forward for the 12th-ranked Nelson, who can crash the top ten should he beat the sixth-ranked Maia this weekend.

“I was supposed to fight him in Dublin, but then he got a staph infection, so obviously he couldn't fight then,” he said. “So I was very happy to get him in Vegas. It's a fight that's been talked about for a long time, a fight that a lot of people want to see, including me. I'm very happy to be fighting Demian Maia, especially because I think he's on his way out now and I'm catching him before he leaves. He's on a winning streak now, so I think this is the perfect time for me to fight him.”

As for the anticipation that this will eventually go to the mat and see two of the sport’s best test their ground game against each other, Nelson says “I don't there will be any disengaging when it comes to grappling in this fight.”

Nelson is also a fan too, and he is well aware of how good Maia is on the mat. He knows how good he is though too, and that’s what he’s planning on showing on Saturday.

And he’ll have a few thousand fans around to see him do it.