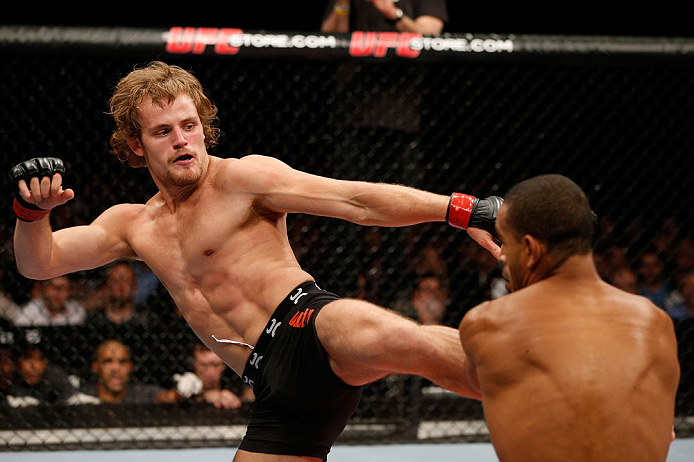 Fresh off his big win over Zak Cummings at UFC Fight Night in Dublin on July 19, unbeaten welterweight phenom Gunnar Nelson will make his first headlining performance as a UFC fighter on Saturday, October 4, when he takes on American veteran Rick "The Horror" Story at the Globe Arena in Stockholm, Sweden.

“I am honored to fight in Sweden and to headline this card," Iceland's Nelson said. "I expect the Swedish crowd to be pretty loud. I believe I have a big fan base in Sweden. They love my kind of style of fighting and I am of course Scandinavian so we have a good connection. So overall I think it’s going to be a great night – I am really excited about this opportunity."

“I have fought in Germany before but it will be my first time in Stockholm, so I am looking forward to seeing the city," Story said. "My schedule now will be to pack up and head down to Arizona to the MMA Lab to start training. I’m really excited for this fight."

Undefeated in 14 professional fights, the 26-year-old Nelson is already 4-0 in his UFC campaign with three wins coming by way of submission. On October 4, "Gunni" will face the toughest test of his career in Story, a Washington state native who has fought and beaten the best over the course of his career.

“Rick Story has fought many of the best fighters," Nelson said. "He beat the current champion and he is very experienced and is a very good wrestler. He is a tough opponent and I am happy to be fighting him."

Owner of wins over Johny Hendricks, Thiago Alves, and Jake Ellenberger, the 29-year-old Story had his first fight with the renowned MMA Lab in his corner on July 16, and he delivered on of his best performances to date as he submitted Leonardo Mafra in the second round.

“Oh man, this is a really exciting matchup," Story said. "Stylistically it’s going to be great because Gunnar is a grappler and an attacker, and when it comes to fighting you can’t ask for more than that - someone who attacks and comes at you."