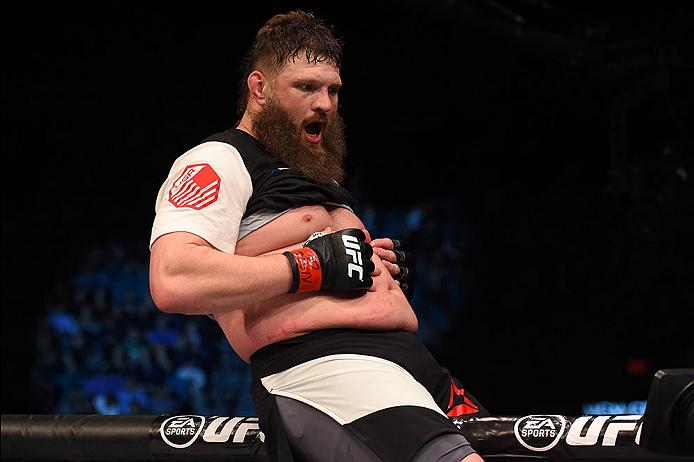 Roy Nelson has fought at home in Las Vegas a number of times, but for “Big Country,” the opportunity to do so never gets old.

“Any time you can fight in Vegas, it’s the Fight Capital and entertainment capital,” Nelson said, “And it’s so much better to just roll out of bed and go to work versus someplace where it’s ‘I’ve never been here before’ or ‘What’s the food going to be like?’”

The affable Ultimate Fighter winner shares the Octagon with Derrick Lewis on the July 7 card that kicks off three consecutive events on UFC International Fight Week, and the Thursday evening heavyweight tussle at the MGM Grand Garden Arena will be Nelson’s second consecutive scrap at home. But this one should be drastically different than his matchup with Jared Rosholt.

Holding down the co-main event slot on the February fight card initially booked at UFC 196, Nelson earned a unanimous decision victory over the former collegiate wrestler in what the 40-year-old fighter admitted was a frustrating affair.
RELATED CONTENT: Inside the matchup: Nelson vs Lewis | Nelson fighter bio | Watch "Big Country's" past fights on FIGHT PASS

That shouldn’t be the case with Lewis, as the heavy-handed Houston-based fighter is known for his aggressive style and willingness to engage, which has resulted in three straight stoppage wins heading into his one.

In many ways, this is a measuring stick matchup for “The Beast,” who has climbed to No. 12 in the heavyweight rankings while amassing a 6-2 record in the UFC, but has yet to collect the kind of signature win that is going to catapult him into the Top 10 and establish him as a legitimate contender. 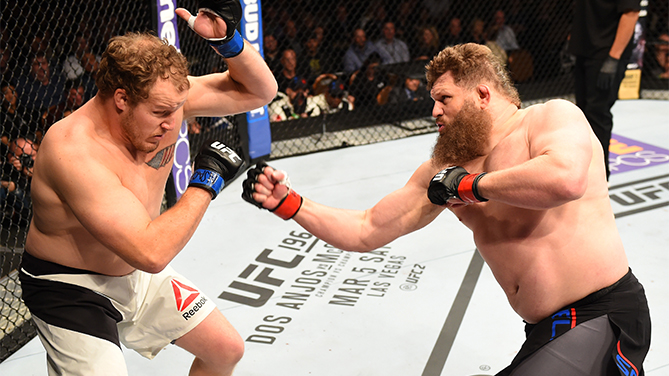 That’s why he focused his attention on Nelson before and after his victory over Gabriel Gonzaga and as far as “Big Country” is concerned, if you’re asking to fight him, he’s happy to oblige.

“The reason we got Derrick Lewis is because Derrick wanted to fight me and anybody that wants to fight me, I’m more than happy to make that fight happen,” laughed Nelson, who has been a fixture in the Top 10 since joining the UFC’s heavyweight ranks with a first-round knockout win over Brendan Schaub on Season 10 of The Ultimate Fighter.

“The one thing about being in the UFC, everybody is at the top of the game and you just have to fight. That’s the reason I like being the guy that if you even have a shot at the title, you have to at least get past me.”

Being the elder statesman in a division filled with 35-and-over talent doesn’t bother Nelson and having just celebrated “The Big 4-0” doesn’t dampen his championship aspirations either.

The way he sees it, anyone that fights for the heavyweight title has a chance to take it home and as long as he’s still stepping into the Octagon, swinging those heavy overhand rights, he still has as good a chance as anyone to wear UFC gold somewhere down the line.

“The thing about the heavyweight division is that any fight – as long as you fight for the belt, you have a chance to actually take home the belt,” Nelson said. And after sharing the cage with eight of the 10 fighters ahead of him in the rankings, including current champ Stipe Miocic, he’s as hungry as ever.

“That’s one thing about being in the UFC. As long as you’re fighting, you definitely have a chance.” 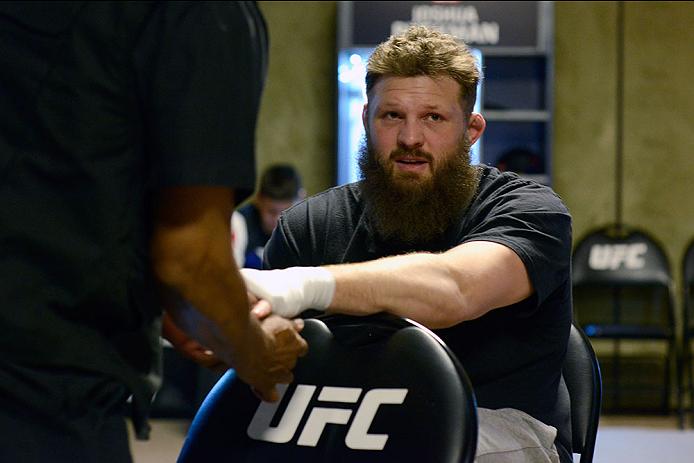 If there is one thing that frustrates Nelson, however, it’s the way title shots are doled out and how a single loss can have a significant impact on a fighter’s chances of challenging for the title, when a second and third meeting between the same opponents could have dramatically different outcomes and therefore alter the trajectory of those two fighters.

“I know Stipe would want to fight Stefan Struve,” he said, referencing the heavyweight champion’s September 2012 loss to the Dutch competitor in Nottingham, England. “It’s just one of those things; like (Alistair) Overeem fighting (Antonio) ‘Bigfoot’ (Silva). Those are fights that as a competitor, you’re like, ‘You got me the first time.’ It’s like playing any other major league sport like baseball or basketball or whatever – that’s why they do a best out of seven.”

While we’re never going to see a “Best of Seven” series used to determine top contenders, Nelson is happy to just keep putting in work and doing whatever it takes to earn his shot.

“There are people that fight for the belt that I’m like, ‘Huh? How’d they get that?’ It’s not like a regular tournament like the Ultimate Fighter house where you actually had to fight to get to where you need to be in the end, but that’s where I’m just like, ‘Okay.’

“Whatever I have chances-wise, I just go out there and fight, put on fights for the fans and sooner or later it’s going to happen.”