Nelson found his rhythm ahead of Glasgow

Approaching the five-year anniversary of his arrival onto the UFC stage as he faces Santiago Ponzinibbio this Sunday in Glasgow, Gunnar Nelson has found his rhythm.

A hyped prospect with an unbeaten record and tremendous grappling pedigree when he first signed with the organization in July 2012, the Icelandic welterweight quickly backed up his advanced billing with four consecutive victories carrying him into the Top 15 and his first main event assignment.

Over the next fourteen months, Nelson would falter twice, suffering a split decision loss to Rick Story and getting controlled on the canvas by Demian Maia, with a first-round win over Brandon Thatch coming in between. There were questions about his motivation, whispers of him being over-hyped and under-performing, but in his last two appearances, Nelson has quieted those concerns and shown what he’s capable of when he’s fighting at his best.

“These last two camps have been really good,” said Nelson. “We’ve taken in a conditioning program that helps a lot and they’ve been better planned, better organized camps and I think we’ve got it down really well now. I’m very happy with this camp as well; I feel like this has been the best one yet.

“There are always personal issues, there’s always something, but it’s more just living and learning,” he said of the factors that have contributed to the solid camps that yielded second-round submission wins and Performance of the Night bonuses against Albert Tumenov and Alan Jouban.

It also doesn’t hurt to be preparing for combat at the new Mjolnir gym, an “everything under one roof” facility that includes a hairdresser and barber’s shop as well as a dining area and bar, which Nelson has no trouble admitting he saddles up to on occasion following a quality workout on the mats.

“Hell yeah – it’s nice to sit down at the bar after a hard session; it’s a good post-workout,” laughed the soon-to-be 29-year-old, who might come under scrutiny for such an admission if he didn’t have a spotless record when it comes to making weight.

“I’m on my weight,” Nelson offered as assurance. “I’m one of the few welterweights in welterweight, if that makes sense, so I’m able to eat what I want, although I do have a very healthy diet overall. I don’t have to suffer too much with the weight cut.”

Nelson has never been one to fixate on the rankings or spend too much time pondering his place in the division, preferring inside to focus on his craft, learning new techniques and working through the different puzzles and challenges he will face in the cage. 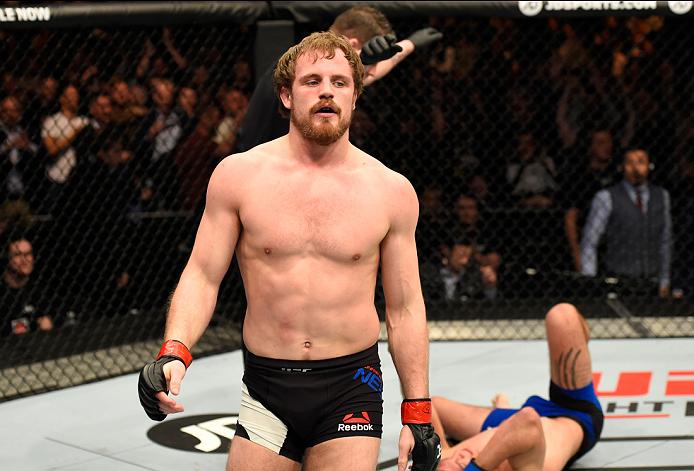 So although he’s aware he enters Saturday’s main event firmly entrenched in the Top 10 and a victory could set him up for a pairing against a top contender later in the year, the talented headliner is more interested in dissecting Ponzinibbio’s game and figuring out how to halt the American Top Team product’s four-fight winning streak this weekend.

“He’s a guy that likes to stand and strike,” Nelson said, beginning his assessment of his opponent and the things he’ll need to do to earn a victory. “He’s got good volume, he keeps coming and he’s dangerous. He’s got good power as well.

“(The keys are) being able to stay there, maneuver and move around him on the feet, catch him off guard, stun him; that kind of stuff. Being able to read your opponent – to see the strikes coming – and counter them is real important.”

And as always, he’ll be entering the cage searching for the finish.

“I play fights – I don’t put faces on my opponents, but I play scenarios and fights over and over in my head all day, every day and I always picture a finish,” said Nelson, who has earned a stoppage in all but one of his 16 career victories. “I always go in there and work to finish the fight – that’s the kind of fighter I am. I’m not a point-fighter.

“I try to corner my opponent and get the job done and that’s what I’ll be looking to do in Glasgow.”