"I don't ever pay too much attention to my opponent. I just do my thing and work on my game. I don't focus on what he's doing. I don't know much about his conditioning or his fighting skills, actually." - Gunnar Nelson 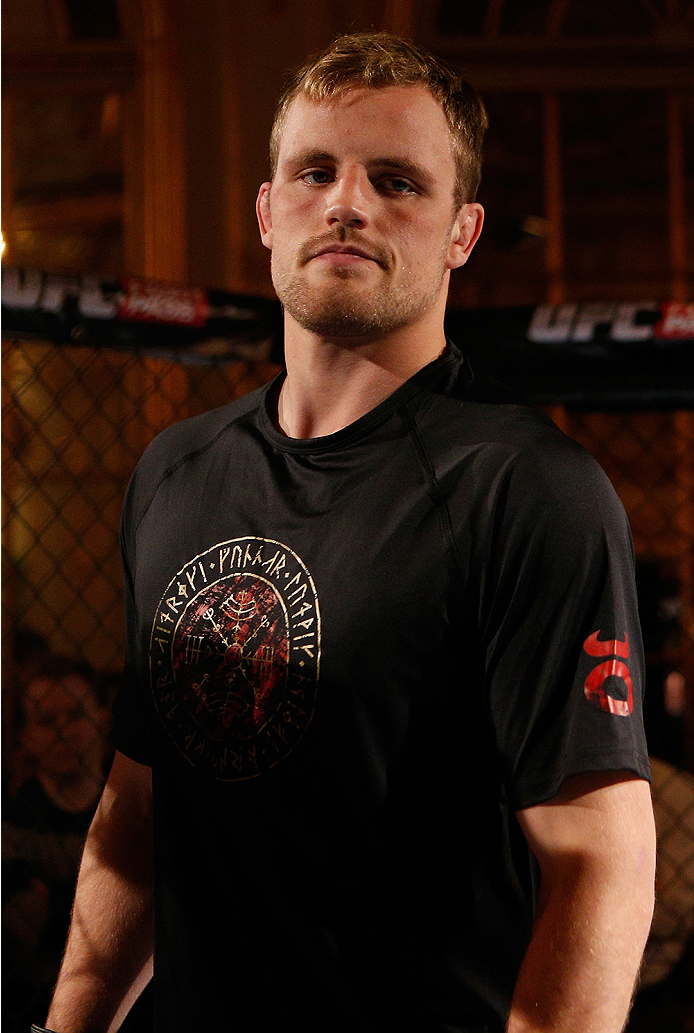 Gunnar “Gunni” Nelson will put his unbeaten record on the line against Rick “The Horror” Story in the main event of UFC Fight Night in Stockholm, Sweden Saturday night.

For the soft-spoken Iceland native and new father, the fight might as well be in his own backyard.

“Sweden is a great place to fight,” he said from his home in Iceland’s capital Reykjavik.
“It’s a short flight so I’m excited about that. We are neighbors.”

“I spent five weeks in Dublin training with Conor before he went to Vegas. All the guys were there and it went really well. I went home to Iceland to finish the last couple weeks, and I am ready to go.”

And unless you’re living under a rock, you probably have heard -- from McGregor himself no doubt -- that he knocked out Poirier in the first round of their bout at UFC 178.

“That was a great win, as expected anyway,” Nelson says. “That's how we all pictured the fight going. I am very excited to see my coach and Conor over in Stockholm. We have a very good thing going and I couldn't be happier about my teammate doing so well.”

And while the two teammates couldn’t contrast more in terms of the way they deal with the media, there are plenty of similarities. Each is the face of MMA in their respective countries.

“You feel great when you know you have all these people behind you,” he said. “I get a lot of support from the Icelandic people. I do feel like I fight for my country in a way, but I don't go into fights feeling like it's country versus country. Conor is really into that Irish takeover and I like it, it makes it very interesting for the fans. To be honest, in my mind I don't pay too much attention to it. We are all one really.”

The pair make an unlikely duo, as Gunnar is stoic while McGregor is brash. But Nelson says the two are a lot more alike than people may initially think.

“I've gotten this question a lot about me and Conor, and we are polar opposites in a way, but we are also very similar,” he said. “We understand each other, but we have different perspectives on things. We're both martial artists but we are both different in the way we approach our careers.”

In Story, Nelson faces one of his toughest opponents to date, one whose fight resume includes wins over Johny Hendricks, Jake Ellenberger and Thiago Alves.

“I haven't really thought about it too much, but Rick is a strong wrestler; he hits hard but I'm very confident wherever the fight goes,” he said. “He definitely doesn't want to be on his back, but we'll see how it goes. I don't really force anything. If the takedown is there I'll take it but I'll go where ever the fight goes. It doesn't matter what happens as long as I win the exchanges.”

With zero losses in 14 fights, Nelson does well in winning those exchanges. But Story is no slouch, not that Gunni even notices.

“I don't ever pay too much attention to my opponent. I just do my thing and work on my game. I don't focus on what he's doing. I don't know much about his conditioning or his fighting skills, actually.”

And even though Story is coming off a submission victory of his own, Nelson believes his jiu-jitsu resume speaks for itself. He was awarded a black belt by Renzo Gracie after a stellar year of competition that included wins at the Pan American Championship and the ADCC Submission Wrestling Championship in Abu Dhabi.

“Renzo invited me to come to New York in 2008 and they took my game to the next level, especially my jiu-jitsu,” Nelson said. “I received my black belt from Renzo and we have a very strong relationship. I am so grateful for everything he did and does for me.”

And while much is made of the Gracie connection, Gunnar is quick to point out that he trains at home in Iceland at MMA club Mjölnir, where he is also a coach, and with Coach Kavanagh in Ireland.

That is, when he’s not out riding his motorcycles.

“Riding my dirt bike is my favorite hobby outside of training,” the man of few words said.