Neil Seery is a Good Man 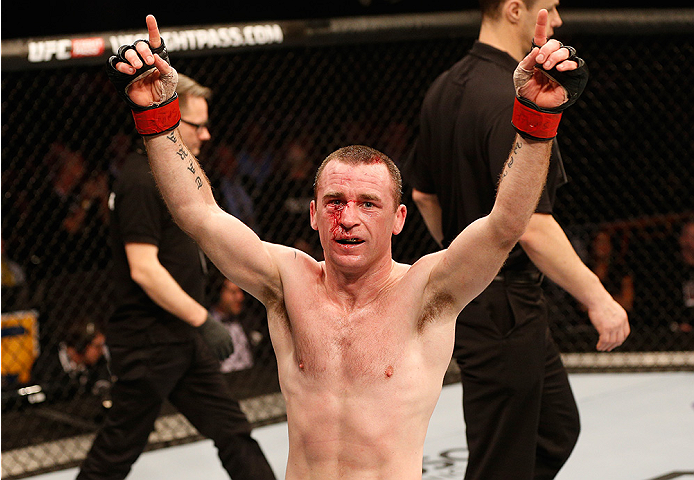 There’s only a small window to catch Neil Seery in the days leading up to his UFC Fight Night bout against Jon Delos Reyes on October 24. It’s not because the Dubliner is out partying or being the pro sports equivalent of a diva. What it comes down to is time - more accurately, a lack of it.

On the average day, Seery, a father of four, begins work in a local warehouse at 6:30am. He clocks out at 2:30pm, trains until four, and if he’s lucky he’ll have 90 minutes free until he goes back to the gym. I ask him when he gets to sleep.

“I don’t know,” Seery laughs. “Whenever I fall over. Most times I can’t remember.”

It’s a grind few of his peers in the UFC’s flyweight division can relate to, but it’s all he’s known since he turned pro ten years ago tomorrow, on October 15, 2005. That’s a long decade of hard work and little sleep, but it all felt like it was worth it when he got a call in early 2014 to replace the injured Ian McCall against Brad Pickett in London.

Seery lost the fight, but he found a home among the best fighters in the world, and while some talk of championships and huge paydays and life in the spotlight, Seery’s only promise to himself was that he was going to take this ride for as long as it lasted.

“A lot of people ask me why do I bother? Why do it?” he said. “I’m 36, four kids, I’m running around, working full-time. But when I got the call two years ago to fight Brad Pickett, I just said to myself, ‘I’m gonna enjoy every bit of it until it comes to an end.’ And that’s basically why I’m still fighting. I love the training part, I love being around the gyms, and I’m actually trying out two or three gyms when I’m fighting, and the fighting game, sometimes I just can’t get enough of it.

“It had nothing to do with the money part, or the fame and stuff,” Seery continues. “It was just being able to get to enjoy myself. I’m actually looking at my kids, and my kids are proud of me, and that’s what keeps me going.”

Seery’s children are aged 15, 11, five, and six months, the family’s latest bundle of joy arriving while he was preparing for his Las Vegas debut against Louis Smolka in July. It wasn’t easy to juggle work, family and fighting, but if you know anything about “2Tap,” it’s that he’s not one to complain.

“The previous fight with Smolka, it seemed to get a bit tougher with a new addition to the family,” he said. “We’ve got four kids now, so things got a lot tougher after that, but what can you do? That’s life.”

If you corner Seery, he’ll tell you that life is good. His two oldest children travel to the gym with him and work out, and when he’s home, it’s about quality time.

And when it’s a UFC fight night – or fight morning in Dublin – the Seerys may not be watching the event live, but the next day, that’s the first thing on the agenda.

“At 8am my 15-year old has her alarm set to get up and watch it with me,” he said. “They actually like what I do, and not many people can say that.”

If you want to play favorites and throw objectivity out the window, it’s impossible to not be a Neil Seery fan. He’s a good man. He takes care of his business, doesn’t look for a pat on the back for it, and when it’s time to fight, his gloves are strapped on, his mouthpiece is in, and it’s on for 15 minutes or less. Of course, at 36, with a 2-2 UFC record, he knows the odds are against him getting into a title fight. But in a 125-pound weight class where champion Demetrious Johnson has done a superb job of eliminating most of his top contenders, some more than once, if Seery can string together a few wins, it’s not out of the realm of possibility to see him one day battling for the belt.

As a practical man, he operates in the here and now, opting against looking that far ahead.

“We just take everything one fight at a time,” Seery said. “I had a fight with Louis Smolka in Vegas last time and things didn’t go my way. I came home, sat back, took a break, was with the kids, and regrouped. And then, look, UFC in Dublin and we’ll go again. So we don’t look that far forward because I’m 36 years of age. I know (UFC light heavyweight champion) Daniel Cormier is 36 and a few of the champions are up around there and they’re in that limelight at the minute, but I don’t really look that far. I look at the positives now, then down the line.”

The positive now is that he has a fight on Saturday and it’s in his hometown. Guam’s Delos Reyes is like Seery in that he hasn’t been handed any gimmes in his UFC career, and after an 0-2 start, he picked up his first Octagon win in May against Roldan Sangcha-an. He’ll be hungry for more on October 24, but Seery is expecting that.

“There seems to be a lot of young talent coming into the UFC,” he said. “You have Sage (Northcutt), he’s 19 years of age. With Delos Reyes (28 years old), there’s almost a ten-year gap there, and people are coming into the UFC really, really hungry now. Hungry for wins, hungry for that fame, and the game is changing due to that. You’ve got a helluva lot of good fighters coming behind you now.”

But there’s always room for a veteran with the heart, determination and skill set to give anyone a tough go. Neil Seery is that veteran, fighting for 30 and 40-somethings everywhere.

“One of your generation, one of the good guys, as they say,” he laughs, but he knows exactly what I mean, and he appreciates being able to give those performances on the sport’s biggest stage. He knows it won’t last forever, but while he’s here, anyone who signs to fight him will ultimately know they’ve been in a fight.

“For years, I’ve bounced around nearly every single club in Ireland and I put in the hard work everywhere,” he said. “I’ve boxed with the best boxers in Ireland, I’ve rolled with the best people in Ireland, I’ve done everything that I can do to get better at this game, and I think it’s just the heart to keep going. That’s why I’m always dangerous to the end. I just have that heart and that belief that I won’t let anybody get the better of me in a fight. And it’s worked so far, and I’ve just got to keep doing that until the time comes. When I have to walk away I’ll walk away.”