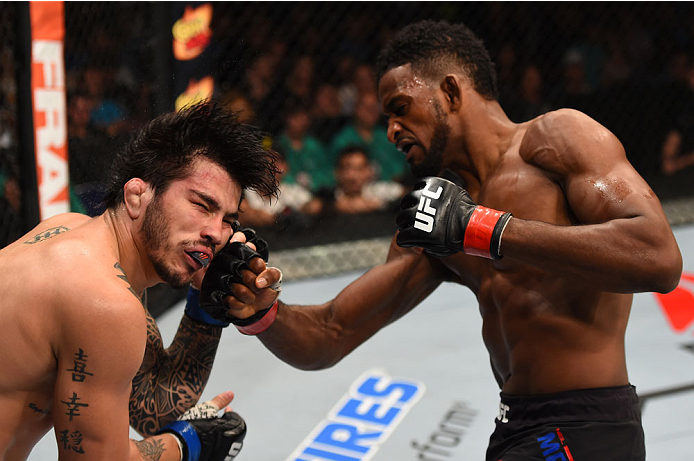 If there is an unspoken rule about fighters stepping into the Octagon only a few times a year, Neil Magny didn’t get that particular memo.

Where the majority of athletes under the UFC banner are prone to squaring off with an opponent two or three times a year, The Ultimate Fighter alum has been on an entirely different schedule. Magny tied the promotional record by winning all five of his showings in 2014, and the 28-year-old wasted zero time carrying that same approach into this year’s campaign as well.

By August, he was already entering his third contest of 2015 and carrying a seven-fight winning streak into his most high-profile bout to date. While Magny had spent a healthy amount of time flying under the proverbial radar, putting himself in the record books and besting a laundry list of opponents brought him to a higher level of visibility in the larger picture at 170 pounds.

Although the Team Elevation representative wasn’t quite ready for contender status, he’d proven worthy of a higher level of opposition and was matched up against submission ace Demian Maia at UFC 190 in Rio de Janeiro, Brazil.

The up-and-coming Denver-based talent put forth a valiant effort against the former middleweight title challenger turned welterweight contender, but was ultimately put away via rear naked choke in the second round of the tilt. Not only did the setback bring his impressive winning streak to a grinding halt, but suddenly the critics he once silenced came roaring back to declare Magny unfit for a coveted top 10 ranking.

Some fighters would allow that negativity to stunt their growth, but Magny refused to let one tough loss against an elite-level opponent erase his progress. Therefore, he took the next opportunity for a big fight he could find, and when a place opposite dangerous striker Erick Silva opened up three weeks later he jumped all over it.

Magny was determined to get things back on track, and he did so by outworking the Brazilian powerhouse over the course of the three-round affair. By using his pressure and reach, he was able to keep Silva on his heels throughout the fight and zap an already suspect gas tank in the process. The end result was another victory for Magny’s resume, and a run toward the next tier of his divisional became recharged.

“After my loss to Maia I didn’t sit around and feel sorry for myself,” Magny said. “I sat with my coaches and talked about the things I needed to do to get better, then hit the gym to work on the areas we needed to. When the offer to fight Erick Silva came to us, we jumped right on it and the decision to do so paid off.

“I feel the fight against Silva showed I was not the fighter fans saw in my previous fight. I think it showed that things happen, but you have to get back up and keep moving forward. The end goal is to get the UFC welterweight championship, but there are a lot of steps to take between here and there.”

Taking short notice opportunities has become Magny’s calling card. Therefore, it should come as no surprise that his latest matchup came as the result of a last-minute shake up. Although his name had just hit the headlines as his bout with fellow surging welterweight Stephen Thompson at UFC 195 was announced for January 2 in Las Vegas, in less than a week that would all change, as Matt Brown suffered an injury and was removed from his main event bout with Kelvin Gastelum in Monterrey, Mexico.

“Nothing against other fighters, but a lot of them aren’t living their lives as athletes who are ready for every opportunity that may come their way,” Magny said. “Most of them are content with fighting a few times a year or they are waiting for some big fight or payday that may or may never come. I’m not willing to do that because there are plenty of opportunities to fight if you stay ready, and it makes you worth more by letting the UFC know you are willing to do so.

“There are plenty of other things I could be doing in my life, but I choose to put all of my time and energy into training. I do that because I want to become the champion, and to do that I know I’m going to need to work my way up the ladder.”

While Magny already had a fight lined up, he couldn’t resist the opportunity a scrap against The Ultimate Fighter Season 17 winner put on the table. Not only would the fight allow him to compete for the fifth time in back-to-back years, but with Gastelum having more name recognition than “Wonderboy,” a potential victory would elevate Magny’s status in the 170-pound fold that much more.

With those rewards hovering in the balance, there was no way Magny was going to pass up the chance to step into the Octagon with Gastelum and add one more stamp to his passport.

“I’ve made a lot of progress and that shows in the level of competition I’m fighting now,” Magny said. “Where I was once fighting guys with a couple fights in the UFC or making their debuts, I’m now fighting guys with a lot of experience or have fought for titles in the past. It’s a progression that is slowly happening, and every win I get is another example of that.

“A lot of guys say they are willing to fight anyone anywhere, but so few of them back up that talk. This will be my fifth fight this year in my fifth different country, so I think I’ve proven I mean it when I say that. I know Kelvin has a great skill set and is going to be a tough opponent. I’m looking to go in there and test him everywhere. I’m happy to fight him in Mexico because I get to fill up my passport and rack up more frequent flyer miles. They are going to start calling me Mr. International before too long.”