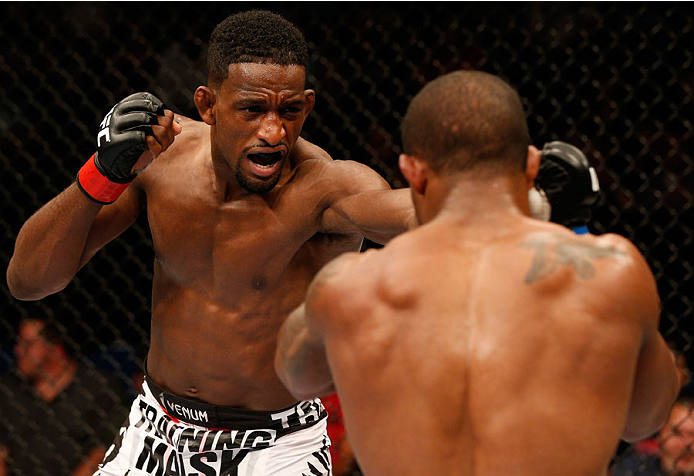 Unless someone comes along, steps into the Octagon and wins six times in one year, Neil Magny will always have a place in the record books as one of only two fighters (along with Roger Huerta) to win five UFC fights in one calendar year.

Knowing that you’ve made a mark in your chosen profession that will likely live on for a long time, if not forever, can be a heady thing for anyone. But Magny, who has already logged one win in 2015, the year after his record-tying effort in 2014, is far from satisfied.

“I try not to get to the point where I feel content where I’m at, so I constantly ask my coaches what I need to work on,” he said. “Even in fights that I win, I pick at the things I did wrong and things I can improve on. I try not to be content with my performances and I constantly try to improve as a fighter. Whether that means putting on a Jiu-Jitsu gi and challenging myself that way, or wrestling with D-1 wrestlers and trying to win in the takedown battle, or sparring with guys who are purely kickboxers or boxers and getting them to challenge me in that aspect, I’m constantly trying to evolve and test myself and not let myself be content with the best that I am now and knowing I could still do better.”

Once under the radar, no one is sleeping on the soft-spoken Coloradan anymore. His five wins in 2014 saw him beat respected names like Tim Means and Alex Garcia, and in February, he scored the third finish of his current six-fight win streak when he submitted Kiichi Kunimoto. So as he approaches an intriguing matchup with Hyun Gyu Lim this Saturday in Manila, it’s as a contender and not just as a guy from The Ultimate Fighter making up the numbers.

To be at this point is a big deal for the number 15-ranked Magny, who didn’t even get a slot on the Ultimate Fighter 16 finale show, a fate shared by all but two of his castmates – the ones competing for the season crowd. Today though, Magny is in the midst of a stellar win streak, middleweight Sam Alvey has won three straight by knockout, and Igor Araujo has won two of his three Octagon bouts.

“I definitely think with the success of Sam Alvey and myself, as well as what Igor has done since The Ultimate Fighter, it’s changing the view people had of our season,” Magny said. “I think we were really young as fighters when the show was filmed and I feel like a lot of us are getting to the point now where we’re finally developing and reaching our potential as fighters.”

There’s no better example than the 27-year-old Magny, who entered the Octagon in 2013 with a 7-2 record, paid his dues, learned his craft at the highest level and showed the benefits of staying active.

“One of the things about my career is that it’s not about what I’m accomplishing now but what I want to accomplish in the future, and in order for me to become the best fighter that I can be, I need to get in there and fight as often as possible and make those mistakes and learn from them and try not to make those same mistakes later on. So if I can stay active and keep fighting, I’d love to.”

And with a third of his first nine UFC fights taking place outside the United States, he’s also picked up valuable lessons that will serve him well in Manila this weekend.

“Traveling to Brazil a few times to fight and going over to New Zealand last year definitely helped me get ready for what I’m about to do in the Philippines now,” he said. “I know how to deal with the time change, with not being able to have the foods that I’m used to, what to do on the flight to stay comfortable and all that stuff, so I feel like my three fights overseas already have definitely prepped me for this point now.”

And after five bouts last year, worrying about weight isn’t something that’s on the menu either.

“Fighting five times last year definitely helped me perfect my weight cut,” he laughs. “I know exactly what to do now – what to eat, when to eat it, and I know the science of cutting weight and I know my body pretty well from doing it so often.”

In short, three pounds to lose in the sauna on weigh-in day is par for the course at this point. But don’t hate Neil Magny; he’s discovered the secret many great fighters have – that staying in the gym and staying in shape are the true keys to success and longevity in combat sports.

So with success already in the bag and longevity also creeping in, what’s next for Mr. Magny?