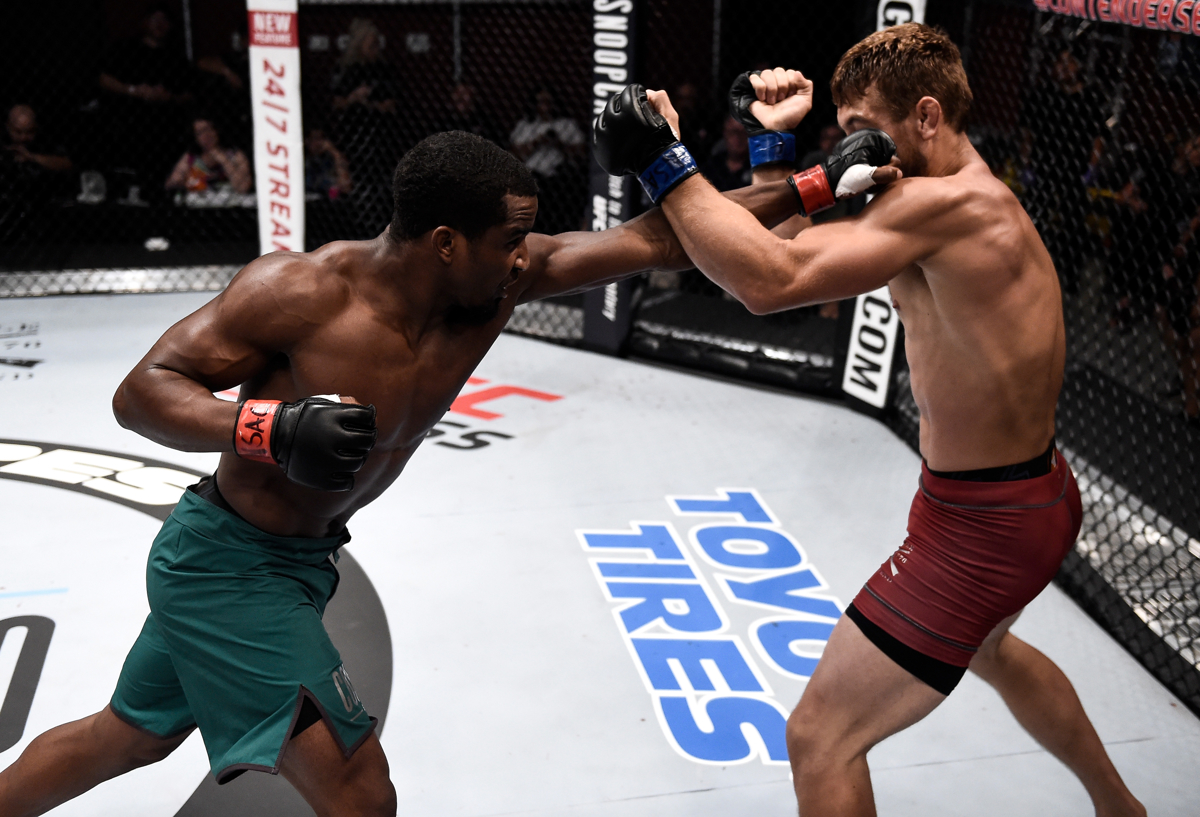 After back-to-back wins within 11 days in July, with the second over Chase Waldon on week three of Dana White’s Tuesday Night Contender series earning him a UFC contract, it’s almost disappointing that Geoff Neal doesn’t have another fight scheduled for August already.

“I really wanted a fight scheduled,” he laughs. “I’ve been back in the gym ever since the (Waldon) fight, so I’m ready for whatever.”

Neal means it when he says it, so don’t be surprised if he ends up in his first UFC fight sometime soon, especially since it will build on the momentum of his July 25 stoppage of Waldon. It was a victory that saw the Texan get off the mat to quickly and efficiently end his opponent’s night with a barrage of strikes that made his nickname, “Handz of Steel,” seem rather appropriate.

But it wasn’t a done deal that he would get a contract. That would happen after all the fights were finished that night in Las Vegas, leaving Neal and the rest of the winning competitors sitting in the same room as they waited for UFC President Dana White’s verdict.

“It wasn’t weird, it was more of not knowing what was going on,” Neal said. “I knew they were deciding on the contract, but I didn’t know how they were gonna do it. I was like, ‘Why are we all sitting in a room with all these people staring at us?’ (Laughs) It got kind of awkward.”

At least until Neal and Karl Roberson picked up contracts. Then everything changed except the 26-year-old Neal’s approach to the game.

“I’m basically going to do the same things I’ve been doing before,” he said. “I’m not gonna change anything up. I’ve been working hard, I’ve been training my ass off, so I’m gonna keep doing what I’m doing and wait for the next call.”

That attitude has been instilled in him by the coaches and team at Fortis MMA, where head coach Sayif Saud’s philosophy is to stay ready at all times.

“Our coach always tells us to be ready at any moment, and we always are,” Neal said. “And I have a tough team too, so if you’re not in shape, you’re gonna get your ass kicked every time you come to the gym. So it’s better that you stay in shape to be ready for whatever comes and for the training that you have to go through at our gym.”

If everything seems like it’s happening at the right time, that’s an accurate assessment, as Neal has finally found the intersection of home and opportunity to make this work after a year and a half away from the sport.

“I was basically trying to find a home, find a gym that I’m comfortable doing a fight camp at,” the Austin native said. “During that time (2015-17) I had moved from Houston back to Killeen and I really didn’t like the training I was getting there. I did accept one fight, but that fell through and I couldn’t find a gym I was comfortable with.”

Until he found Fortis MMA. And now, Geoff Neal is a UFC fighter. Just don’t expect him to be running around town with his UFC hat and t-shirt saying that to the world.

“I see a lot of people get in the UFC and they get kicked out after two or three fights because they lose,” he said. “I will honestly not call myself a UFC fighter until I win at least three fights in the UFC

. Then I’ll buy a hat and a shirt and walk around telling people I’m a UFC fighter. (Laughs) Until then, I’m just a fighter that’s in the UFC. I haven’t earned that title yet.”