NBA's Pistons take their shot at the UFC 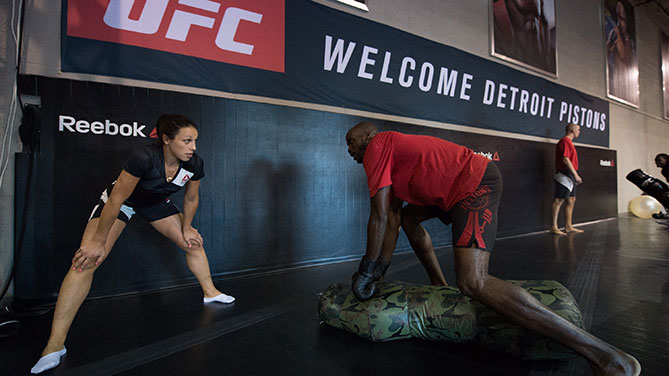 Watch out NBA teams – Detroit’s bad boys are back … sort of.

No, this is not another bad Hollywood remake. And Dennis Rodman and Co. aren’t planning on making a return – at least we don’t think they are. Yet fourteen active Detroit Pistons players did make their way out to Las Vegas last week for five-days of MMA-style training led by UFC Hall-of-Famer Forrest Griffin and guest coaches Stefan Struve, TJ Dillashaw, Luke Rockhold and women’s strawweight champion Joanna Jedrzejczyk, just to name a few.

“It’s been a really big team bonding thing for us, being here all together with no coaching staff – just us guys – having fun with something that we are all unfamiliar with,” starting center Andre Drummond said. “It’s been a lot of laughing, a lot of guys that are really enjoying this process. I’m having fun, so it’s a good feeling.”

“I think with their (MMA-style fighter training) type of training, it’s so intense and so fast that it puts your body in shock to where you feel great. I feel great; we are doing short reps but it’s really intense.”

Anthony Tolliver, a seven-year NBA vet who joined the team last season, broke it down a little more scientifically.

“As basketball players we train the same muscle groups all the time. I think there’s something to be said about teaching some other muscle groups other things,” the Creighton University alum explained. “I think that can really help in injury prevention and different things like that in the long run. It’s good for our bodies to get out here, learn some different things and push through different types of exercises we’ve never done to develop some mental toughness and have fun while doing it.”

Those benefits, in particular, are why several athletes, not just the Pistons, have taken to this type of training. For years, elite-level athletes, particularly NFL stars, have gone the route of doing this type of training in the offseason with the hope that it gives them the slightest edge, because that can make all the difference in pro sports where athletes at the top are so evenly matched skill-wise.

“To an extent, MMA is not like any other sport. You use your muscles differently, so you get a workout and you’re not getting that overuse you get by doing the same thing – like running up and down a basketball court and doing quick turns to shoot – over and over again.”

One of the highlights of the week was training with the champ, Jedrzejczyk. Even though the professional basketball players dwarfed her 5’6’’ frame, they all were attentive and not one thought they could challenge her for the belt once they saw her in action.

“She’s a rockstar, truly,” Griffin said. “She’d run over to them, grab them and instruct them “No! Kick like this!” Even more than our male athletes, she was totally unintimidated by these guys. It’s a funny thing when an attractive small woman tells you that you are kicking like a wuss; you are bound to change your ways.”

This was the second training session between UFC athletes and the Detroit Pistons. During the first week of August, Griffin, Stipe Miocic, Kevin Lee, Ryan LaFlare and Aljamain Sterling all made the trek to the Palace of Auburn Hills to take part in NBA training drills. Neither the UFC nor Pistons players found it easy as they traded places and, as a result, there’s shared admiration on both sides.

“Once you learn about the lives of some of these guys, where they come from and what they are all about as people, it’s going to be very easy for me to follow those guys, but also once you start following him you might learn about somebody else,” Tolliver said. “I’ve been a casual UFC fan over the years, and I think I’m going to be a little bit bigger fan now.”

With the UFC fighters going back to readying for their individual bouts, the Pistons are back to work getting ready for their new season, which begins October 27.