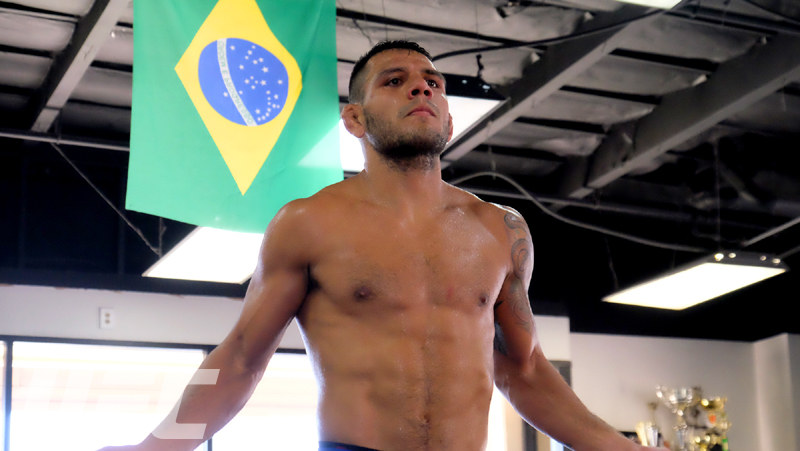 Brazil's hunt for UFC gold starts on July 7, when the lone Brazilian champ, Rafael Dos Anjos, faces Eddie Alvarez in the main event of Fight Night Las Vegas airing on UFC FIGHT PASS and over 1,000 bars throughout the USA.

Seeking better facilities, coaching opponents to improve his training and enhance his competition, Dos Anjos moved to the United States a few years ago, training under the tutelage of Rafael Cordeiro at Kings MMA. So far, the move to California has benefited the Brazilian, but that relocation ended up being used to attack RDA by rivals.

Recycling an attack Chael Sonnen used on Anderson Silva years ago, Conor McGregor insisted in a press conference in January this year that Dos Anjos does not represent the Brazilian people simply because he is building a life in the Land of Uncle Sam.

But is that truth? Do the Brazilians not feel represented by RDA?

"Today, the world is globalized. The fan sees the Brazilian flag. He is not concerned if the guy trains at Nova Uniao or AKA. The fan sees the hard working Brazilian fighter chasing his dreams. He is not concerned about where Rafael lives,” says Marcelo Alonso, pioneer journalist in martial arts in Brazil and founder of the Portal do Vale Tudo website, which has a respected forum where fans debate.

"The most important forum of the Brazilian MMA, where fans have been talking about fighting for nine years, there was never even a link considering the possibility of Rafael being a traitor for not living in Brazil. This does not correspond to reality."

"This idea is nonsense," says Renato Rebelo, chief editor of the Sexto Round website, which also hosts a forum. "Rafael has even told me in an interview that he decided to move to the United States when he arrived at his gym in Rio de Janeiro in the week of Carnaval and found it to be completely empty. Before being Brazilian and born in Rio, he is an individual who has a duty to think about what is best for himself and his family. If he had not taken such action, he would hardly be wearing the UFC belt.

"Conor McGregor tried to stigmatize Rafael, but McGregor himself already had a really warm reception in Boston -- an American city built by Irish immigrants. Would The Notorious label his compatriots in the same way? It's all part of the game of emotional destabilization.”

For Ana Hissa, producer and reporter for Combate channel, it is important to highlight that fighters from all over the world seek better training in the U.S.

"How many Brazilians live in other countries because of better working conditions, or chance to make a better life for the family?” she asks. “Not only Brazilians, but athletes from many countries live elsewhere for several reasons. I think this argument makes no sense. Rafael always uplifts Brazil and carries the flag of the country.”

Since entering the UFC, RDA fought once in a Brazilian card, defeating Evan Dunham in May 2013. However, there is no denying that for the not-so-hardcore fan, Dos Anjos has become a household name only after UFC 185. The injuries he suffered after getting the title may have affected his local image as absolute idol in Brazil, but that does not mean that fans do not support him, and that his popularity will not increase in the future.

"Rafael is a big candidate to become the greatest lightweight of all times. His numbers are even close to BJ Penn's now,” Rubelo says. “ (...) Rafael, for me, is one of the greatest living Brazilian athletes. He is an example of victory through repetition and willpower. The problem is that his tortuous trajectory, unfortunately, does not reach the general public. I doubt that Rafael would be bothered by fan while walking on a Brazilian shopping mall. But he just can't fight his nature. This is not a guy with the gift of oratory.

“If he tried to emulate Chael Sonnen, it would certainly be something embarrassing. To me, he is very strong mentally. It would not be natural if he started to act another way. I think Rafael's image is one of a family man, who is trying to have a better life. It's the image of a true martial artist."

The MMA star power of Dos Anjos is not built on celebrity, but on work ethic and resolve.

"He is not very charismatic, but has an interesting life history. He is not the idol, neither the greatest talent. He is like any Brazilian who struggled to reach the top and works hard to stay there. His story is built on sweat,” Alonso says. “He has lost a lot in the UFC, but came back and today he is the champion. He had the opportunity to become a national icon when he was fighting with Conor, but ended up getting hurt.

“He would give McGregor the beating Aldo did not. If he had won, he would become an idol. If this fight ever happens, nobody is going to care if he lives in Brazil, or does not like to trash-talk to promote his fights ... "

While it might not be as flashy, the support of the Brazilians for Dos Anjos is alive in Brazil, and is evident among journalists who cover the champion for a living.

A few days after the aforementioned press conference, RDA landed in Rio de Janeiro for a media tour, and fan attention commenced on the airport sidewalk, while he was waiting for the van that would take him to the hotel. Taxi drivers stopped their cars and opened the windows just to shake the champion's hand, and breaks in his schedule to snap photos were countless. With every new approach, there was a word of encouragement.

For someone who was barely known in his own country, the love of fans is something to be celebrated and treated with great care.

"I like to take pictures with people, be closer to the fans,” Dos Anjos says. “If a person asks to take a picture with you, it's a sign that you mean something, that this person wants to have a memory with you. I always make sure to give them attention. Without the fans, we are nothing.”

And whether he is living near or far, the vast majority of Brazilian fans will be with RDA on July 7 in Las Vegas.