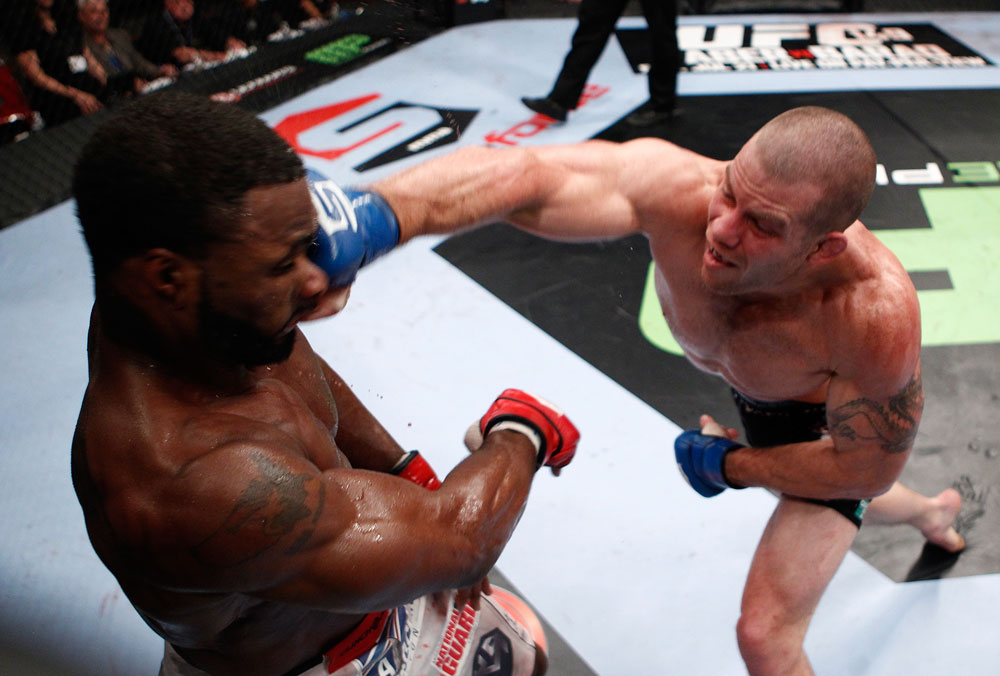 Nate Marquardt can win his fight with Tarec Saffiedine this Saturday in Oklahoma, defending his Strikeforce welterweight title for the first and last time in the process, move back to the UFC, race through the division and win the championship there, make 20 defenses, and still, when people put together his defining moment in the sport, it will point back to February 21, 2009 and the finish of his fight with Wilson Gouveia.

You remember that one don’t you, the finish that looked like it came straight out of a videogame, where Marquardt delivered a flying knee, kicks to the head and body, a spinning backfist and a series of punches within seconds before a final knee ended the bout? Marquardt sure does, blow for blow.

“I saw that he (Goueveia) was ducking his head when he jabbed, so that was when the initial setup had some thought in it,” said the Strikeforce 170-pound champion. “I said ‘He’s ducking his head, so I’m gonna catch him with the jumping knee.’ And so after I caught him with that, I saw that he was rocked and that he was hurt, and after that it was just hit him where he’s open. The whole combination was natural and it wasn’t really thought out. It came from what was open. I threw a right high kick that kinda skipped off his head, which put me in a turned position, so the spinning backfist came from the stance I landed in, where he kind of had my back. So I had to do something to get turned around again so I could keep hitting him. And again, that was something I trained, stepping into that angle and throwing that spinning backfist. So it was all natural and instinctual.”

And it’s something that comes from experience you just can’t match if you haven’t been competing in this sport for as long as he has. Still just 33 years old, Denver’s Marquardt has been competing professionally since 1999, long before MMA became the juggernaut on the sporting landscape that it is today, and when he faces guys like Saffiedine, his 35-10-2 record dwarves his challenger’s 13-3 slate. The same thing was the case when he faced the 10-0 Tyron Woodley for the Strikeforce title last July. Sure, Woodley was talented, determined, and still has an immense upside in the sport, but Marquardt’s veteran guile, when added to his experience level, allowed him to weather some early storms to knock his foe out in the fourth round. In fact, for Marquardt, his win – which came in his Strikeforce and welterweight debut – was a perfect storm of its own.

“You always plan on the best, but that being said, I think it was a combination of stuff,” he said. “Me cutting down to 170, I feel like a better athlete at this weight, it forces me to tighten up my diet, and I actually feel like I have more energy for training just because I’m not as big. I feel like it’s the right weight for me, I feel a lot more athletic, a lot more dynamic, and that was a big part of it. I had a really good camp and I feel like I’ve really dialed in my training. And that’s what I was hoping for – I wanted to be right back on top when I came back.”

Mission accomplished, and he’s favored to make it two for two at 170 in Strikeforce’s final event Saturday before presumably returning to the UFC, where he went 10-4 as a middleweight from 2005 to 2011. And while he had plenty of success at middleweight, his rebirth at 170 pounds could have him playing the what if game. Not so, says Nate “The Great.”

“I’m a man of faith and I believe God has a plan, and I think there’s a reason why it happened like this,” he said. “So no, I honestly didn’t even think about it like that at all. I’m just happy right now, and I don’t even really play the what if game for the future. I just take it day by day and fight by fight.”

And this week’s fight is against the always tough and talented Saffiedine, someone Marquardt says he’s been studying since he got the fight. And if there’s any pressure on being in the last fight in Strikeforce history, he’s not showing it. Instead, he’s relishing the opportunity.

“I think it is pretty cool, and I’m gonna do my best, regardless of if it’s the last show or not,” he said. “I’m honored to be on their last card, I think it’s gonna be special, and I’m definitely gonna put on a great show. I think there’s gonna be some great fights that night.”

And there should be some great fights at welterweight with Nate Marquardt throughout the rest of 2013 if he returns to the Octagon. Of course that’s a discussion for another day, but he will be watching what happens in Montreal this March very closely.

“Obviously watching the last few events, there have been some great fights at ’70,” said Marquardt. “There’s a huge card coming up in March (UFC 158) with Georges (St-Pierre), and Rory (MacDonald) and (Jake) Ellenberger and all those guys – that’s gonna be a huge card for welterweights. But whatever happens happens. I can’t control any of it, so I’m not gonna sit and worry about it. I’m just gonna do my thing, train for my fight, and hope for the best.”