Nate Marquardt: A Veteran Back in Prime Form 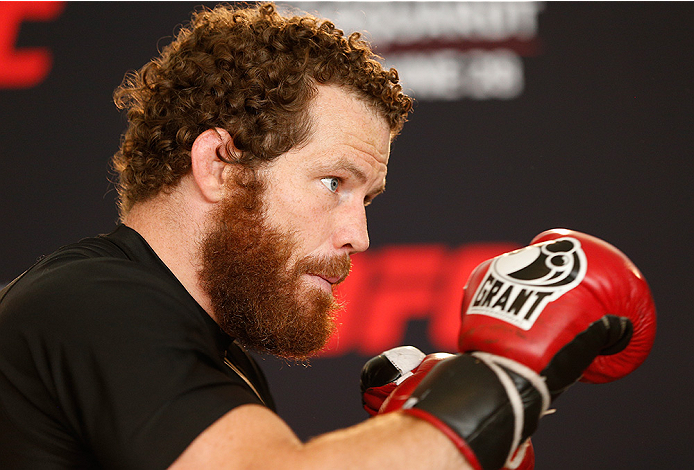 How long, you ask?

The headlining first-round stoppage, which earned him a Performance of the Night bonus, was a return to form for Marquardt, who has long been considered a perennial top contender. It could not have come at a better time, as he was coming off the worst losing skid of his 15-year career.

“At 170 [pounds], I beat Tyron Woodley and then I had three straight losses,” Marquardt said. “I felt like I wasn’t able to perform at the level that I knew I was capable of. I attribute a lot of that to the weight cut. I wasn’t recovering fully and I wasn’t getting in the best training because of the cut. The week of the fight, I was getting too dehydrated and I wasn’t able to rehydrate completely. I felt very good going into this fight. During the fight, I got hit with a couple of punches and it felt good - it felt like it should. I have always been able to take punches well. It felt like I was back to normal. I busted out that armbar at the end of the first and I was very excited.”

After winning the vacant Strikeforce welterweight belt in his division debut via a brutal fourth-round KO combo of knees and punches against Tyron Woodley, Marquardt dropped the strap in a unanimous decision loss before getting stopped with strikes in his first two fights back in the UFC at 170 pounds. “I had to go through all that to learn that wasn’t the place for me,” Marquardt who chalks up 2013 as an ultra-rough learning experience, said.

As he entered the Octagon in New Zealand this past June, the Coloradan didn’t look on edge fending off a possible disastrous fourth loss in a row. If anything, he looked calm and confident with more meat on his frame and a full beard to boot. While a short fight in the end, there wasn’t a moment of pause as Te Huna pushed the pace with punches, clinches and takedown attempts, which Marquardt deftly parried and countered toward a slick submission stoppage.

“It felt like I was just reacting to everything he did,” Marquardt said. “Right off the bat, he came at me very aggressively and he came right into striking range. He forced the fight right away. I hit him with a couple right hands and then he rushed in and I caught him with the knee. Both of the takedowns I got were actually counters to his takedowns. I felt I was able to capitalize on his mistakes and his over aggression. I don’t even go for a ton of armbars in training. Armbar attempts are very few and far between when it comes to my style. Then again, when somebody gives me a position and that’s where I’m at - I’m proficient at them.”

The tap improved the 35-year-old’s overall pro record to 36-13-2 and to 11-4 as a middleweight inside the Octagon. The stoppage win was Marquardt’s 25th of his career including 14 submissions and 11 KOs. That killer instinct or famed finisher’s mentality he has been known for since he turned pro back in 1999, is something he believes is a product of the bygone era he started his martial arts journey in.

“When I first started training, there were no weight limits and there were no time limits,” Marquardt said. “The only way to win was to finish your opponent. You weren’t trying to impress anyone, you were trying to finish your opponent at the right moment. When that is your focus, you get good at it. Over the years, I’ve had to learn not to. I’ve lost fights because I was too focused on finishing the fight than winning the fight. It’s a balance.”

Up next, Marquardt will head to Las Vegas for UFC 182 as he takes on Hawaiian striker Brad Tavares. The Ultimate Fighter 11 alum is 7-3 inside the Octagon and coming off of back-to-back hard-fought losses against Yoel Romero and Tim Boetsch. The 27-year-old is every bit a product of his training, with his staunch takedown defense from the Xtreme Couture gym and his technical kickboxing from K-1 legend Ray “Sugarfoot” Sefo. A win for Tavares or Marquardt will no doubt solidify them as a top 15 middleweight in the UFC rankings.

“I knew he was tough because I saw that fight with Yoel Romero,” Marquardt said. “I was very impressed with both fighters. Especially knowing Yoel’s wrestling credentials, seeing how Brad was able to stop some of his takedowns. Brad got taken down a lot, but Brad got right up a lot of the times. He was just very scrappy and tough. He would not accept positions. He just wouldn’t give up no matter what happened to him. He looked very quick on his feet and has some very good striking. It’s very exciting to compete against guys like Brad Tavares, who is a younger guy with a very good record who has the majority of his fights in the UFC.”

This Saturday, Marquardt will tangle with Tavares to continue his climb back to the top of the middleweight rankings where Nate “The Great” resided just a short time ago.