"I’m always going to be on guard, and if there’s a submission or knockout attempt early on, I’ll go for that." - Nate Marquardt 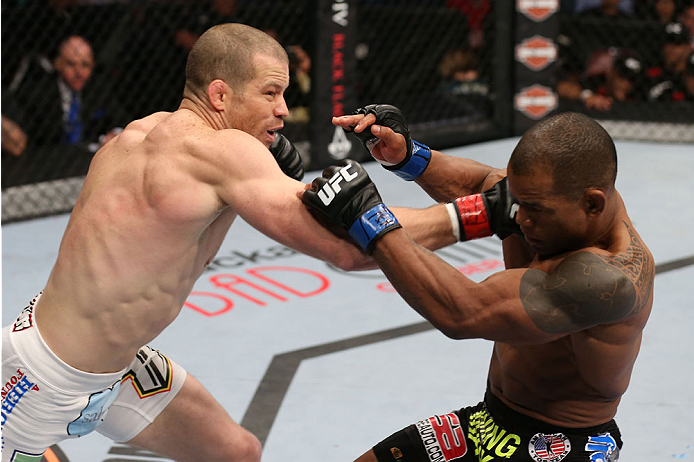 As he approaches what may be the most pivotal fight of his 15-year professional career, a UFC Fight Night bout with James Te Huna on June 28 in New Zealand, Nate Marquardt isn’t stressing out, isn’t on edge, isn’t wondering if this will be his last time wearing gloves with “UFC” on them.

That’s the beauty of being a veteran of 50 fights. Marquardt has been in this position before. He’s won some, lost some, but the morning after the sun still came up, his wife and kids still loved him, and he found the next “most pivotal fight” waiting for him.

So this is just business as usual for the 35-year-old, who will aim to snap a three-fight losing streak in the rarest of ways – by moving up in weight. Usually, a losing skid will prompt a move down in weight, but in Marquardt’s case, his welterweight experiment in 2012-13 didn’t just result in a 1-3 record, with the last two losses to Jake Ellenberger and Hector Lombard coming by way of knockout, but it also took away what had put Nate “The Great” on the map in the first place.

“I didn’t really realize how bad it was affecting me,” he said. “But just looking at some of the numbers of my athletic performance in the gym, the constant dieting and not fully recovering between workouts was making my workouts weaker and weaker. You’re preparing yourself to make weight, rather than to fight. That’s not a good place to be and not where you should be. And obviously the last week’s cut was pretty hard, so I felt like it was the right thing to move back.”

Making weight isn’t easy at 25, let alone 35, but in addition to the discomfort of trying to make 170 pounds, Marquardt was seeing it affect him in other ways come fight night.

“I’m disciplined enough (to make welterweight) and if it was good for me I would definitely do it, but the dehydration the last week can basically affect your chin, so that was a factor, and I wasn’t able to perform well in my training, and if you don’t train hard, you’re not going to be able to fight as hard.”

It started off well enough for the Colorado product at 170, as he knocked out Tyron Woodley in 2012 to win the Strikeforce welterweight title. He lost the belt in his first defense to Tarec Saffiedine in a bout that made it more than clear to the doubters in the MMA world that leg kicks do win fights, and then came the KO defeats to Ellenberger and Lombard.

That last fight came in October of 2013, and after some reevaluating of things, Marquardt decided to go back to the division where he once challenged Anderson Silva for the title back in 2007. And that middleweight class looks a lot different from when he was last there in 2011, when he beat Dan Miller at UFC 128.

“There’s definitely a lot of big names and skilled fighters, but to me, I’ve always seen that when you look at different UFC divisions,” he said. “It looks like a strong division to me though. You’ve got guys like Vitor (Belfort), (champion Chris) Weidman, and (Lyoto) Machida. So there are big names and then a lot of very good athletes and very skilled guys.”

First up is another fighter looking to snap a losing skid by changing his physical scenery in former light heavyweight James Te Huna. The New Zealand-born Aussie will be getting a home game in Auckland this time after losses to “Shogun” Rua and Glover Teixeira, and most would say that’s the only advantage he’ll have because he’s making his first cut to 185 pounds. Marquardt doesn’t necessarily agree, and his first welterweight fight against Woodley backs his point up.

“I try not to worry about what he’s thinking or what he’s going through because at the end of the day, I have to be ready and I want to prepare myself for a guy who’s totally, a hundred percent trained, had the best of the camp of his life and is in the best shape of his life,” said Marquardt of Te Huna’s first drop to middleweight. “At the same time, if I think about it, I think he’ll be okay on this one because if you get a thinner and lose a little body fat and maybe a little muscle, while eating cleaner and things like that, generally in the beginning your performance is going to go up. You’re going to be a little lighter, which will make you faster, you’re not going to lose much strength, you won’t lose any power. But over time is what’s going to be the test for him.”

“That last week is no fun though.”

And it’s those last few days that may determine what happens in the five-round UFC Fight Night main event. If Te Huna goes through hell to make weight, a fast pace early might put him in places where he doesn’t want to go. Then again, going into the fourth or fifth round won’t be a picnic for someone who has drained himself on the road to the scales. Either way, Marquardt – not surprisingly – is ready for anything.

“It depends on him,” he said. “If he’s pushing me, that’s going to force me to engage very quickly, and if he’s backing up a lot, that makes it easy as well to attack. If it’s a more technical fight, it could start off a lot slower, but regardless, I feel like I’m going to have the better conditioning and the more I can pull him into the later rounds, the more it’s going to benefit me. But I’m always going to be on guard, and if there’s a submission or knockout attempt early on, I’ll go for that.”

If Marquardt emerges victorious, it will open up a whole new world of options for him at middleweight. But just like being in a “must win” situation, this is something he’s seen a dozen times over the course of his career, and again, he’s learned from past mistakes, so he’s not giving future matchups a second thought.

“Throughout my career, I’ve done things like that, and I can’t control who I’m fighting next, so why am I going to sit there and think about it or worry about it?” he asks. “I know who I’m fighting next and that’s who I’m focused on. Anything past that, it’s fun to think about it sometimes, but to sit there and really plan stuff out, it’s pointless because you have very little control over who you fight or when you fight. Planning too far ahead or over thinking things you can’t control, my outlook is that God provides for me no matter where I’m at, so why am I going to sit there and worry about something two or three fights down the road.”