Nate Marquardt Has "Great" Expectations at 170

"I’m in excellent shape and I’m excited to go out and put on a performance. It’s like being a kid and being a week out from your birthday or Christmas." - Nate Marquardt 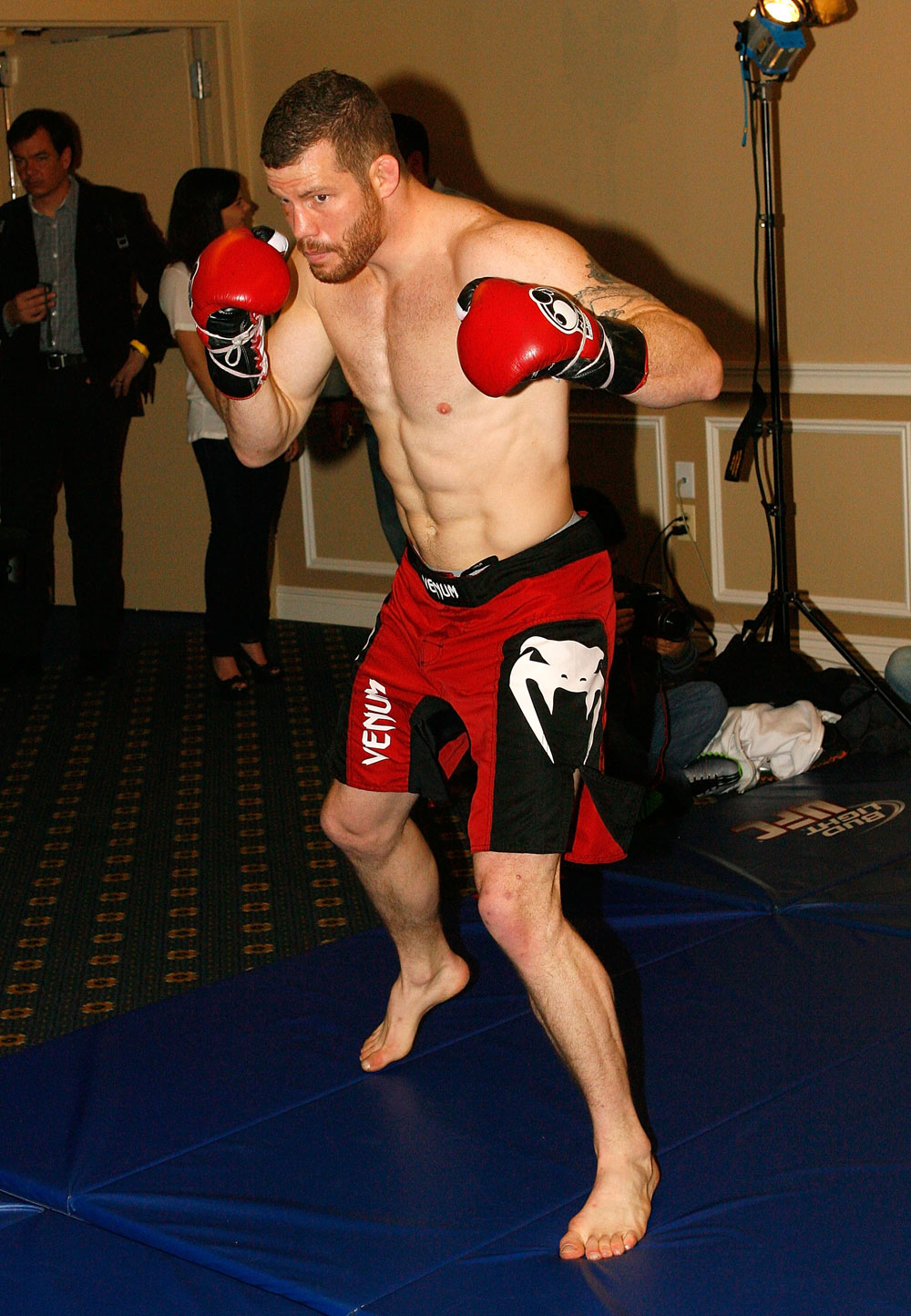 Anderson Silva. Yushin Okami. Chael Sonnen. Demian Maia. Rousimar Palhares. Dan Miller. It’s a Who’s Who of UFC middleweights, and the one thing they all have in common is fighting Nate Marquardt.

And whether he won or lost against the aforementioned foes, just being in with that gang of stalwarts is an impressive feat for Nate “The Great.” But at 32 and with more than five years in the division, was the prospect of having to go through at least a few of those names again to get to Silva and another shot at the title going to be worth it, especially since he was feeling good and in range to make welterweight?

This Sunday in Pittsburgh, you get your answer, as Marquardt is making his 170 pound debut against Rick Story in the main event of UFC Live on Versus. It’s not a case of the Coloradan being chased out of the division on a loss or two, as he’s coming off an impressive win over Miller at UFC 128. Instead, it’s an opportunity to have a whole new set of options that aren’t just intriguing for him, but for fans of the sport.

“There’s a ton of guys to fight at welterweight and it’s all new and exciting,” said Marquardt. “The fans are gonna love to see fights like me against (Josh) Koscheck, me against (Jon) Fitch, Anthony Johnson and (Thiago) Alves, and of course Rick Story, the guy who just beat Alves. Those are all very exciting fights and it’s one of the big reasons why I’m moving down, to put on exciting fights for the fans.”

The other reason is that he had grown tired of the years of putting on weight, as opposed to losing it, in order to compete. It’s a problem many fighters wish they had, but Marquardt, more than 12 years into a career that began in 1999, made the decision that while he has the skill and experience to fight anywhere, he’s going to do so at as close to his natural weight as possible.

“I feel I can be successful at really any weight,” he said. “For me, it’s just a number. I feel as strong as any heavyweight and as fast as any lightweight. I feel that if needed I can put weight on or I can take it off, but I feel the best walking around at my natural weight. I think at ’85 I was trying to hold weight on because I was competing with guys who were cutting down from 215, and I think that was the wrong approach. Even if I were to fight at ’85, I would probably be one of the lightest middleweights, and that’s how I would fight best. So it wasn’t something that I had been thinking about for a while; I tried walking around lighter for my last fight and I loved it, and all my coaches agreed. And (UFC welterweight champ) Georges St-Pierre was the first one who recommended it to me last December when we were training for his fight with Koscheck. He asked me ‘why don’t you consider fighting at welterweight,’ and I said ‘I never really thought about it. You’re my teammate and you’re the champ there,’ and he’s like ‘man, you should really consider that. I think you’re better at a lighter weight and you can perform better.’”

It begs the question, what took so long?

“There was a point where the money and the way to make a living were in the higher weight divisions,” he said. “There was light heavyweight and heavyweight. And that’s changed and all the weight groups at this point have very exciting fights and very big names. And not only that, but it was just something I wasn’t focused on. I was doing well at middleweight and even after my last fight, I was very successful. But this is something where I feel I’m gonna be able to perform better with my body at a lighter weight. I feel faster, have way better stamina, I can push harder, and mentally I feel like I did when I was 20 years old.”

The one thing that has changed since he was 20 and beginning a long string of success in Japan’s Pancrase organization is that the lead up to a bout is no longer something that leaves him with butterflies in his stomach that turn into flying elephants come fight night. Sure, he still gets nerves, just like any fighter, but those feelings get wiped out by anticipation when it’s time to get ready for battle.

“It’s kinda cool because in the beginning, I was very excited and very nervous at the same time, and obviously the good part of that is the excitement part and the bad part would be if your nerves got out of control and you let them control you,” he said. “And there came a point where the excitement was not gone, but the nervousness overwhelmed the excitement. But I think at this point in my career, I’m focused on the excitement and I’m not really nervous. I have a little bit of nerves, but I’m just excited. I feel ready to go, I’ve done everything I can, I’ve trained a hundred percent, I’m in excellent shape and I’m excited to go out and put on a performance. It’s like being a kid and being a week out from your birthday or Christmas.”

His present on Sunday isn’t one most would like to unwrap, as rising star Story is the kind of opponent that will leave you knowing that you’ve been in a fight even when you win. Originally, Marquardt was scheduled to face “Rumble” Johnson, but injury sidelined the knockout artist. In stepped Story on not just short notice, but reallllllyyy short notice, as he is just coming off his UFC 130 win over Alves last month. Marquardt was obviously happy that Story stepped up and saved the main event, but did the veteran think in the back of his head, ‘how dare this kid think he can beat me on less than a month’s notice?’

“I was definitely thankful,” he said. “I even sent him a tweet to thank him for taking the fight. He’s a young guy, he’s hungry, and it doesn’t surprise me at all that someone’s gonna take the fight. It’s a chance to be the main event and fight a guy like me who has a bigger name. If it was a more seasoned vet kind of guy, they’re not gonna take the fight in most cases because they have more to lose than to gain. But he’s in a win-win situation. He’s a new kid on the block, he’s on a six fight winning streak, and he’s looking at a lot of opportunities.”

“And he’s young,” Marquardt continues. “He doesn’t understand that he should be doing a full camp to fight a guy like me. Earlier in my career, and I’ve even done the mistake more recently, you fight guys and you have success early on in your career on short notice, but it’s different when you’re fighting a guy of a higher caliber who has more experience than you, and I think that’s definitely gonna be a factor, but I don’t know if it’s necessarily something that would have made a difference if he had a full camp.”

That’s a veteran’s confidence, and Nate Marquardt has already seen and done it all in the fight game with one exception – now he’s going to do it at 170 pounds. And the way he looks at it, Sunday night is going to be the start of something big, and he’s glad Story is the one who’s going to help him kick it off.

“He (Story) brawls, he has a very aggressive style and he likes to swing for the fences, and I like to put on a show and go for the knockouts and the submissions,” said Marquardt. “We both can be very aggressive fighters, and that’s what the fans want to see.”