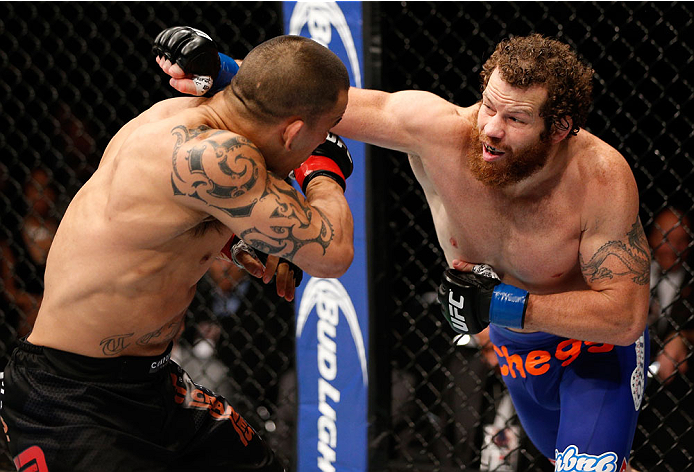 If someone fights long enough, it’s easy to get caught in a routine. Sometimes that’s good, but most of the time, it can catch up to you at the most inopportune times. And when it does, you can either chalk it up to bad luck or a bad night and go back to the same old habits, or you can try something new.

That breaking the mold stuff usually doesn’t sit too well with 36-year-old prizefighters, but Nate Marquardt isn’t about to sit idly by on a run that has seen him go 1-4 in his last five bouts. Granted, those losses did come against Tarec Saffiedine, Jake Ellenberger, Hector Lombard and Brad Tavares, but after a listless effort in his January decision loss to Tavares, the Coloradan switched things up a bit.

“I trained hard for Tavares,” he said. “But I think I didn’t do everything necessary to beat him. That doesn’t mean I didn’t train hard enough or go to all my practices. But I have enough experience to know if I’m getting the best training or not, and I thought the training I was getting was good enough, rather than getting the best training. So that’s one thing I changed for this camp.”

Long associated with the MMA scene and the coaches in Denver, where he makes his home, Marquardt still spent the majority of his camp at home working with some familiar faces, but he also traveled to the American Kickboxing Academy in San Jose twice. It was a jolt to the system for Nate “The Great,” but a welcome one.

“My whole training camp looked completely different, and it wasn’t easy at first because I changed coaches, and that was hard because nothing went wrong with my other coaches,” he said. “I just knew I wasn’t getting the best that I needed for me.”

This Saturday in Mexico City, Marquardt returns to face Kelvin Gastelum, a former Ultimate Fighter winner and welterweight contender making a move back to 185 pounds after having some serious battles with the scale. Given the past drama surrounding the talented Gastelum and his weight issues, the focus is clearly on him heading into their UFC 188 main card bout, but the fight is just as big for a fighter who knows the two-division life all too well.

“I think it’s a great opportunity for me,” Marquardt said. “He’s one of the TUF winners, and he’s got a big following in Mexico, so it’s a big fight for him, but in the same regard it’s a big fight for me. I’m definitely confident, but I know he’s tough. He’s young, he’s hungry, and he really pushes the pace and has some great wins. Just the pace and pressure he puts on, and the volume of strikes that he throws and with the takedowns included, that can be hard to deal with if you’re not prepared in that regard. But I looked at the fight and got pumped up. The guy’s got a lot of potential as far as his UFC career, and I’m excited.”

It’s a fight Marquardt is taking very seriously, even though Gastelum will be fighting at middleweight for the first time since he won TUF 17 in April of 2013 and has made no secret of his desire to go back to welterweight in the future. But if 16 years in the fight game will teach you one thing, it’s to not worry about your opponent, but focus on yourself.

“I don’t really look at what his situation is because I don’t ever want to underestimate somebody,” he said. “In my career, that’s been one of my faults. I tend to look at a situation and say ‘oh, I have him here, here, and here, so it’s going to be a good night for me.’ And then the fight comes and he’s much tougher. I’ve always done better when I’m thinking ‘man, this guy’s gonna be an animal, and I’ve got to beat him here and here,’ and then when fight night comes, even if it’s hard, I’m staying on top, but a lot of times it turns out to be easy because I planned for a tough fight. I need to keep that in my head and not make that mental mistake.”

Boxing Hall of Famer Mike Tyson may have captured the fight game perfectly when he said “you’re old too fast and smart too late.” But the addendum is that the statement is only true if you see something going south and refuse to do something about it. Marquardt, still dangerous at 36, has made the physical changes, and now it’s all about the mental game.

“As long as I’m in the right mindset, I can perform well,” he said, and he sounds like he’s ready, not just for Saturday night and Kelvin Gastelum, but another run at the middleweight title he challenged Anderson Silva for in 2007.

“I’m not giving up on that dream for sure,” Marquardt said, “and with some of the guys I trained with for this camp, judging how I felt in the beginning versus how I feel now, and seeing the progression I made in such a short time, that’s what I’m gearing up for.”