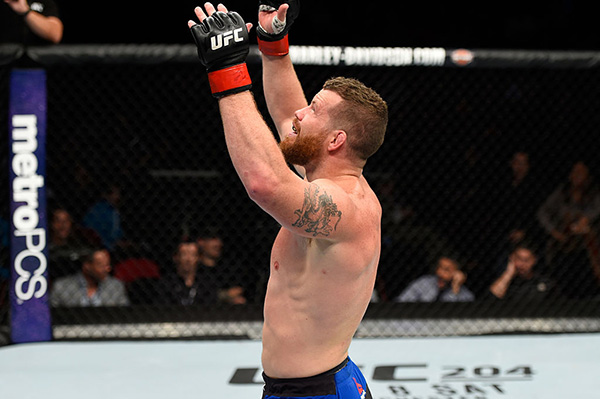 Nate Marquardt celebrates after defeating Tamdan McCrory by KO in their middleweight bout during the UFC Fight Night event at the Moda Center on October 1, 2016 in Portland, Oregon. (Photo by Josh Hedges/Zuffa LLC)" align="center" /> An 18-year professional fighting career will produce several memories, and the MMA run of Nate Marquardt was no different.

Yet whether it was his first King of Pancrase title, his rise to a middleweight title shot, a Strikeforce welterweight championship or several highlight reel knockouts, the soft-spoken 38-year-old Denver product, who retired last week, left an impact on the sport that should be celebrated.

And while the focus at the moment will be on the fights that comprised a 38-19-2 record in a career that began in 1999 and ended with a hard-fought split decision loss to Cezar Ferreira in November, my greatest memory of a fighter I began covering in 2001, before an IFC fight against Gil Castillo, is quite different. It was the time he didn’t blink when I told him the tape of our interview before his 2007 fight against Dean Lister snapped and he agreed to knock out another one on fight week.

That’s rare. Not just the tape breaking, but a fighter agreeing to basically do the same interview twice, and that’s what it was like dealing with Marquardt. No drama, no BS. The guy was a total pro leading up to a bout, always quick with a thank you, and when the Octagon door shut, he showed up to fight. 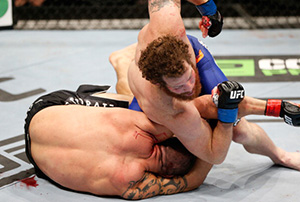 James Te Huna in their middleweight fight during the UFC Fight Night event at Vector Arena on June 28, 2014 in Auckland, New Zealand. (Photo by Josh Hedges/Zuffa LLC)" align="left" />But many of his greatest early moments didn’t take place in an Octagon, but in a ring. In fact, he was barely out of his teens when he made his Pancrase debut in Japan against none other than the legendary Genki Sudo, who handed Marquardt his first loss in December 1999.

“Before my first fight it was nerve racking,” he told me in 2001. “He beat me, but I knew that I was better than him, and I knew that if I stuck with the training, I could accomplish a lot. It kind of put a fire in me to train harder and go back and win my fights.”

Less than a year later, he was the first middleweight King of Pancrase thanks to a decision win over Shonie Carter. At 22, he was on top of the world, but he had an idea he was going to be sticking around for a while.

“The Pancrase guys think it's great that I'm so young and already the champion,” Marquardt said at the time. “I can only get better from here on out, and I have a lot of fighting time before I retire. Being a champion this young is good because I can continue to fight for a long time.”

Marquardt would compete 19 times in Japan, building a reputation as one of the sport’s best fighters, but there were still mountains to climb at home in the United States, and in August 2005, he made his UFC debut with a decision win over Ivan Salaverry.

Over the next six years, he became a fixture in the UFC’s middleweight division, going 11-4 with wins over the likes of Jeremy Horn, Martin Kampmann, Wilson Gouveia, Demian Maia, and Rousimar Palhares. Three of his losses were via decision to Thales Leites, Chael Sonnen and Yushin Okami, with his only stoppage defeat coming in a 2007 world title fight against Anderson Silva. It was a stellar run, punctuated by a stoppage of Gouveia that had to be seen to be believed and that showed a new aggressiveness in the usually tactical Marquardt. 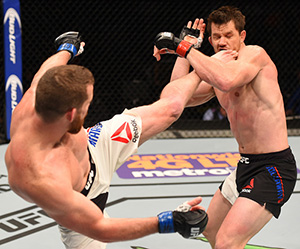 CB Dollaway in their middleweight bout during the UFC Fight Night event at the Amway Center on December 19, 2015 in Orlando, Florida. (Photo by Josh Hedges/Zuffa LLC)" align="right" /> “In the past I’ve always looked at it as both (a fight and a sport),” said Marquardt in 2010. “It is a sport, but it’s also a fight. It’s not a game. You’re out there and you can really get hurt. You could be winning the fight, but at any moment, if you make the wrong move, you can get knocked out or choked out, and vice versa. It doesn’t matter how you’re doing, you’re in there to fight and to finish the guy. For a while, I was looking at it as more of a sport.”

That attitude served him well in his Strikeforce debut in 2012, as he knocked out future UFC welterweight champion Tyron Woodley in the fourth round to win the promotion’s welterweight title. It was Marquardt’s last major victory, but there would be more wins in the UFC when he returned to the Octagon in 2013 for the final run of his career, as he submitted James Te Huna, and knocked out CB Dollaway and Tamdan McCrory, proving that even as he got older, his power never waned, keeping him among the most dangerous fighters in the sport.

It’s almost funny to use the word “dangerous” when describing Marquardt, because he was one of those people who just didn’t fit the stereotype some have of a pro fighter. He just had a love for the sport, one that he will carry with him in the coming years, and as one of the last remaining mixed martial artists to bridge across the early and modern eras in this evolving sport, I expect to see him around the game for a long time. Just without his mouthpiece in and gloves on. And he’s earned that break.