Nate Marquardt: Back to What Got Him Here 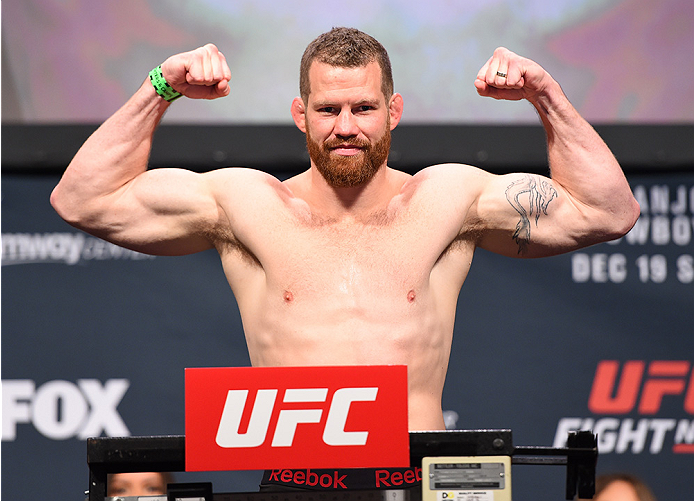 Nate Marquardt knew it was going to be a rough night even before he made the walk to the Octagon to face Kelvin Gastelum at UFC 188 in June.

Fighting in the high altitude of Mexico City, Marquardt just wasn’t ready for that end of the equation, which came as a shock to someone who makes his home in Denver. But this was a whole other level.

“I was sick,” he said. “I had thrown up right before I walked out, but I had fought sick before. It definitely sucks, but I was also having trouble with the altitude.”

There was talk of pulling him from the bout, but for the veteran middleweight, not fighting was never an option.

“All those things, I was trying to block them out, knowing that the fight's gonna go the way it goes,” Marquardt said. “I might not feel good, but I'm gonna have to fight, so I can't sit there and worry about it.”

Marquardt got the doctor’s green light to fight that night, he fought, and he lost, getting stopped in two rounds. It was an excellent performance by Gastelum, and if you didn’t know what happened to Marquardt before the fight began, you would say it was one of his worst. And many did say that, opining that after going 1-5 in his last six fights, Marquardt should consider calling it a day at 36.

The Coloradan heard such talk, which he accepts as part of the game. That doesn’t make it any easier to deal with when people don’t always know the whole story.

“It's almost like you can't explain it,” he said. “They're not there every day, and it's been an emotional rollercoaster. I have a very small handful of people who really didn't stop believing in me. Other than that, everyone thinks 'oh, when are you gonna retire?' I've been asked that question this year more than I can count.”

It’s nothing a win over CB Dollaway Saturday in Orlando can’t cure, but Marquardt isn’t seeking a band aid to cover a bullet wound. He believes that he has more to offer the sport, not just this weekend, but for a long time moving forward. And that belief began with some self-analysis after his January loss to Brad Tavares.

“I got to a point where I knew I wasn't getting the training I needed, so I basically thought 'what would my training look like if I had the best training?'” he explains. “And the number one thing was going back to work with Trevor (Wittman) as my main coach. From there, everything fell into place.”

And as far as Marquardt was concerned, it wasn’t about getting more complex with what he brought to the Octagon, but going back to basics. Literally.

“I started listening to too many people and learning too many new things, and from there, my basics weren't where they needed to be,” he said. “I got to the point where I know physically I can do it, but it's just not happening, and I really had to look at what was going wrong, and that's what it came down to. I had a lot of coaches and they were all telling me the things they thought I needed to do, and so I'd go from one thing to the next to the next to the next, but it was never fixing the problem. I know a ton of tricks, but if my basics aren't tightened up, they're all worthless. So I feel like I'm back to where I used to be finally as far as my basics, my power punching, and things like that.”

Wittman was the one who wanted the Gastelum fight halted after the second round, and if Marquardt was going to get some brutal truth about whether he still had what it took to compete in the Octagon, it was going to come from his coach.

“He was with me back when I knocked Demain Maia out in 20 seconds and when I beat Wilson Gouveia,” Marquardt said. “These were some of my best fights, he was with me, so he knows exactly where I was. I've been able to get some really good sparring here in the last few months and he's very encouraging and he knows what happened in the last fight. He says people are going to have their opinions and that's fine, because they see this through their lens but they don't know everything, so you can't take that stuff to heart.”

Marquardt doesn’t. And neither does Dollaway, who expects the best “Nate the Great” to show up to Amway Center and face him. That’s respect, something Marquardt has always received from his peers. And wins or losses won’t change that.

“I appreciate that, and I respect CB,” Marquardt said. “He's got a ton of fights in the UFC and he's had a really good career. On one hand, when I'm fighting guys, they don't ever underestimate me, so that's never an advantage. (Laughs) It would be nice if they did. But I think that's one thing that's cool about martial arts is that the guys, in general, have a lot of respect for each other.”