Nate Maness Thrives Being The Underdog

Nate Maness doesn’t care what predictions people have about him leading up to a fight. In fact, he keeps up with all of the prediction videos and blogs that people put out about his upcoming bout in order to fuel his fire.

He doesn’t shy away from the feeling of being an underdog, which is something he isn’t unfamiliar with.

“This will be my second undefeated opponent in the UFC, I think I’ve been an underdog in every fight and I’m 3-0,” Maness told UFC.com prior to his fight against Umar Nurmagomedov. “At the end of the day, it’s just me and Umar that get in there, so the odds don’t mean anything, the prediction videos don’t mean anything; he has to put me away or get put away. That’s all that it comes down to.”

Throughout his career, the Tennessee native has made switches from featherweight to bantamweight. His last fight against Tony Gravely in September was his first fight back at bantamweight since 2019.

Maness has shown that he can have success in both weight classes in his fights prior to entering the UFC. In 2018, he became the TKO bantamweight champion and in 2020, he won the vacant Hard Rock MMA featherweight title.

“I’m actually cutting less weight before than I have my whole career. I think it’s just maturing and taking that next step and realizing that you are on the biggest stage that you could possibly be on, so the weight is great,” Maness said. “I love this weight class.”

Even though Maness came out victorious against Gravely last time around, with a second-round TKO, he still had to take some time away from training after he broke his jaw during the fight.

During his time away, he wasn’t able to get much training in due to his mouth being wired shut. He was still able to get some lifting and running in and tried to work around the circumstances. Once he was cleared in late January, it was back to business as usual for “Mayhem”. 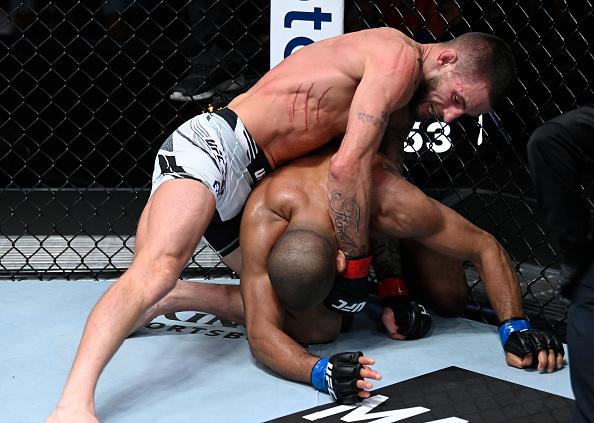 “I’ve just been working on some of the fundamentals - chin down, hands up,” Maness said. “You can get away with a lot of things on the regional scene that you can’t get away with here, so I’ve just been cleaning up some stuff. I feel better than ever.”

Prior to his last bout, Maness emphasized how much he wanted to showcase the power he possesses in his hands. He powered through a near-stoppage and turned things around to end things the way that he wanted.

But now, a new test awaits.

An undefeated bantamweight that has seven wins by submission and four first-round finishes.

Maness understands the skills that come with his opponent’s name and history; however, he feels fully prepared in the camp and training that he has had up this point.

“I know he is going to throw some fast kicks, he has really good standup, boxing is a little bit on the other side, and I think that’s somewhere when I can kind of take the advantage,” Maness said. “He’s a Nurmagomedov, he’s going to come and wrestle at some point, so we’ve been working on a lot of takedown defense. I think half of his wins are by rear naked choke, so I have to keep him off my back. We’re going to come out and we’re going to put on a show.”

Maness is expecting a war when he meets Nurmagomedov in the middle of the Octagon on Saturday night. He has earned a Performance of the Night bonus in his last two fights and has no plans to switch up things now.

“It feels great to me, but I think it feels better to my friends’ pocketbooks and wallets. They’ve made a lot of money off me so far, and it can only go up from here.”