Nate Landehr Is At Peace With The Obstacles He Has Faced Leading Up To His Fight With Julian Erosa, Now He's Just Ready To Put On A Show At UFC Fight Night: Blaydes Vs Lewis
By Zac Pacleb, on Twitter @ZacPacleb • Feb. 18, 2021

It takes maybe all of 10 seconds of listening to Nate Landwehr talk about fighting to understand that the Clarksville, Tennessee native truly holds a passionate love for competitive violence. That passion makes his recent run of luck, or lack thereof, all the more heartbreaking. After making his debut in January 2020 and earning his first win in May 2020, Landwehr’s scheduled bouts against Shane Young and Movsar Evloev both fell through – the latter falling through the afternoon of the fight.

Landwehr admitted that missing the Young fight was a blessing in disguise, but described the Evloev contest that never was as “just a kick in the ass.”

The always-charismatic “Nate the Train” still brims with optimism. That’s the thing about loving something, isn’t it? Even when it lets you down, you come back to it with the same hopefulness, and Landwehr looks back on his last two fruitless training camps with a positive spin.

“I feel like it’s really helped me not have to get in shape,” he said. “My training camp is just straight – I’m working. I’m already in shape. I don’t need to rush to get my cardio to a certain level because I could already do a fight any day of the week.” 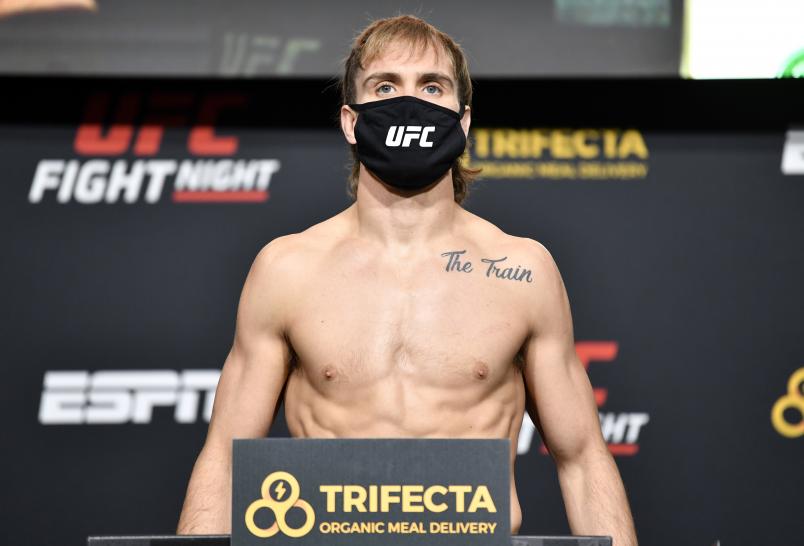 Nate Landwehr poses on the scale during the UFC Fight Night weigh-in at UFC APEX on December 04, 2020 in Las Vegas, Nevada. (Photo by Chris Unger/Zuffa LLC)

Granted, the constant work in the gym also comes with its own risks. A few weeks after the Evloev fight fell through, Landwehr got a cut on his face, pushing back any potential bouts just a little longer.

The waiting comes to an end, finally, on February 20. Landwehr is booked to fight the experienced Julian Erosa in what should be an entertaining featherweight contest, although Landwehr’s reputation would suggest any fight with his name on the bout sheet will provide something memorable. Given the amount of waiting and disappointment surrounding his last couple fight weeks, he is brimming with anticipation to let out all of the pent-up excitement in the Octagon.

MORE UFC VEGAS 19: Expect Fireworks Out Of The Gate From Derrick Lewis | Fighters You Should Know | Watch The Main Event Preview | Fight By Fight Preview | Every Aleksei Oleinik Submission

While all the time spent in the gym hasn’t been rewarded with a fight, Landwehr is confident that it has helped him sharpen the tools that helped him get to the UFC in the first place. Part of that just comes with time, but also because he has spent so much time training and feels like he hasn’t needed to get into shape to prepare for a fight. Against Erosa, he has a single-minded assumption with how the fight is going to go. 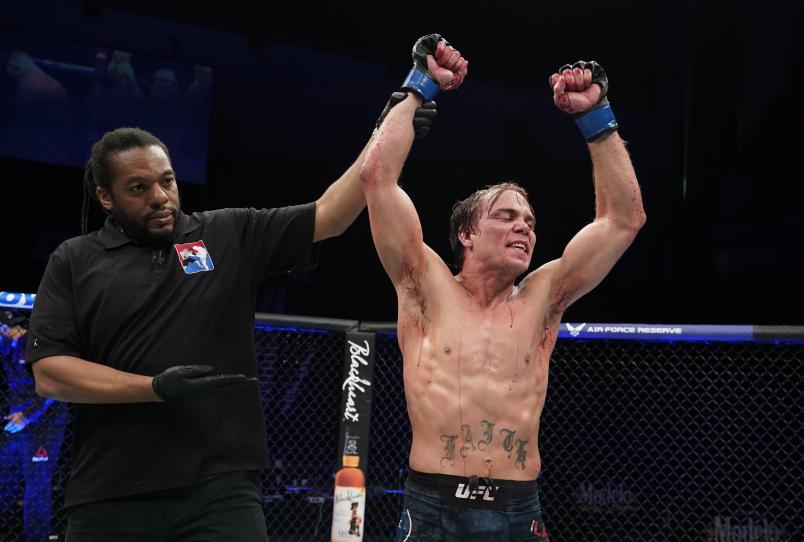 Nate Landwehr celebrates after his victory over Darren Elkins in their featherweight fight during the UFC Fight Night event at VyStar Veterans Memorial Arena on May 16, 2020 in Jacksonville, Florida. (Photo by Cooper Neill/Zuffa LLC

“I’m knocking him smooth out,” Landwehr said. “I just don’t see me not knocking him out. I just feel like if he’s been knocked out before, if I can’t knock him out, it’d be weird.”

His debut was marked with the anticipation every fighter feels once making it to the Octagon, and then his second fight stood out in terms of really showing UFC fans what he could do when he is on his game. The third has been full of stops and starts but getting to the fight is all Landwehr wants. When reflecting on the lead-up to this contest, it’s obvious what stands out the most for him.

“Just the ups and downs,” he said. “Just the, ‘Can I get a fight?’ I’m cool with it. I’m at peace. I’ve been through a lot of s*** personally, so nothing really fazes me unless I die. And then I’m dead, so then that’s not going to faze me neither. Nothing can really hold me down. I’m just at the point of my life where there’s nothing that can really truly happen that is just going to put me in the dumps permanently.”

When Landwehr steps into the Octagon, he’ll get to unleash all the stored-up energy, work and anticipation from months of waiting. Knowing how Landwehr fights makes this all the more exciting and, for him, he’s just eager to unleash the part of him that loves the fight game so much.

“I’m a positive guy most of the time but a straight savage,” Landwehr said. “I balance the yin and the yang. I haven’t had any yin or yang in a minute. I don’t know which one is the yin or the yang, but I need to get one of them back. I ain’t get to let the devil out lately. I’m ready to let loose and let that ride.”