Nate Landwehr is ready to avenge the loss from his UFC debut and let it rip Saturday at UFC Florida.
By E. Spencer Kyte, on Twitter @SpencerKyte • May. 14, 2020

Most regular human beings operate somewhere between four and seven on the energy scale; they’re clearly awake, relatively engaged, and, if the right opportunity presented itself, could be up for an adventure.

Landwehr’s baseline feels like it’s around a nine and when things get going, “Nate the Train” is the fighting equivalent of Spinal Tap’s Nigel Tufnel; he’s turning things up to 11.

That’s why it was so odd to see Landwehr lay back a little in the opening moments of his UFC debut earlier this year against Herbert Burns.

After the two men raced to the center of the Octagon to start, it was Landwehr who started moving backwards, circling on the edges, allowing the Brazilian to come forward. On the broadcast, Michael Bisping expressed surprise that Landwehr didn’t come out guns blazing, and before “The Count” could finish his thought, Burns was in on a single leg that he turned into a trip before locking in a D’Arce choke.

Landwehr eventually stood and worked himself free, but just when it seemed like he was ready to start fighting his fight, Burns put a knee on his chin and the fight was over.

“Preparing for the fight, we were worried about getting taken down and the grappling aspects instead of saying, ‘F*** it — if you get taken down, pop back up,’” explained Landwehr, who returns to action this weekend against durable veteran Darren Elkins. “We were just more focused (on him than we should have been), but it is what it is.

“I feel like I was about to get right in it, come into my own and then I got smoothed out,” continued the 31-year-old UFC sophomore, who entered his debut on a seven-fight winning streak. “I feel like I was just about to start doing what I do best. I was focused on what he was going to do more than what I needed to do.

“I’m a steamroller, but I was getting into the habit of trying to be good instead of being a bad m*****f***** and that’s never good. That will never happen again. I’m just going to come out there and do what I do best and that’s letting it rip.” 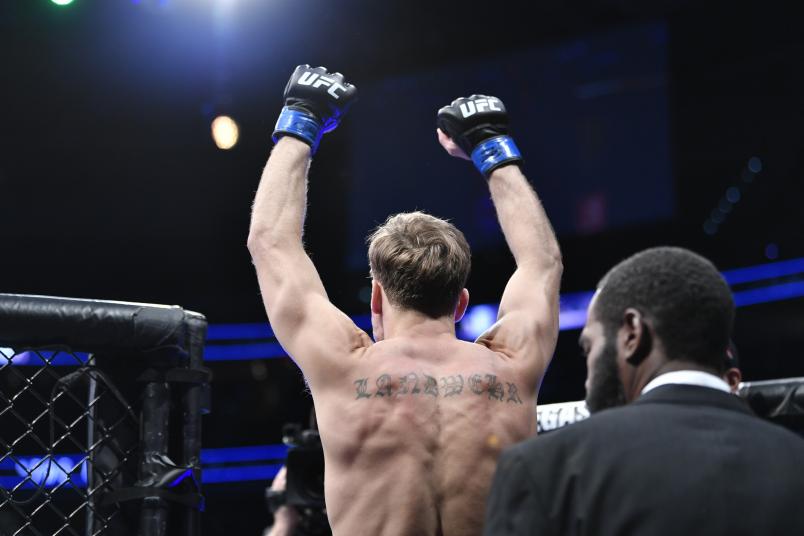 RALEIGH, NORTH CAROLINA - JANUARY 25: Nate Landwehr prepares to enter the Octagon prior to his featherweight bout against Herbert Burns of Brazil during the UFC Fight Night event at PNC Arena on January 25, 2020 in Raleigh, North Carolina. (Photo by Jeff Bottari/Zuffa LLC via Getty Images)

RALEIGH, NORTH CAROLINA - JANUARY 25: Nate Landwehr prepares to enter the Octagon prior to his featherweight bout against Herbert Burns of Brazil during the UFC Fight Night event at PNC Arena on January 25, 2020 in Raleigh, North Carolina. (Photo by Jeff

A couple months removed from his debut appearance in the Octagon and having had plenty of downtime to reflect on his performance as a result of the “shelter in place” orders that have limited what people have been able to do over the last several weeks, the only thing about that night in Raleigh, North Carolina that eats at the featherweight hopeful is that he didn’t show the fans his true self inside the cage that evening.

“The reason I’m most disappointed about last time is that the fans didn’t truly get to see what I have to offer,” said Landwehr, who long ago embraced a “kill or be killed” fighting style and is genuinely accepting of the fact that occasionally, that could mean you end up on the wrong end of things like he did back in January.

“That’s my fighting style — kill or be killed, finish or be finished, and sometimes you come up on the other end when you fight like that. That’s just the way I fight and I’m not going to shy away from the way I fight. You’ve got to finish me or get finished; that’s the way I’m going to roll ’til the day I die.

“I’m coming back,” he added, his voice a mix of optimism, excitement, and assuredness. “A fight is a fight, baby, and I’m coming to fight, every time. I’m trying to be exciting. Every time I fight, somebody is going to be getting a bonus, me or them.”

This weekend in Jacksonville, he’s got the right dance partner if that’s the kind of fight he’s looking for in his return to the Octagon against the 35-year-old Elkins.

Aptly nicknamed “The Damage,” the Indiana native has been a staple in the featherweight division for nearly a decade, earning a place in the Top 15 through a series of quality victories, many of which he won on sheer force of will. He’s a quintessential grinder whose greatest assets are his toughness and resiliency, which have allowed him to press on when countless others would have wilted and rally back to earn some victories that looked like sure-fire defeats.

Though he enters Saturday’s contest on a three-fight slide, Elkins has shared the cage with an assortment of the top names to pass through the division over the last seven or eight years and represents a step up in competition for Landwehr, who sees nothing but positives from getting to share the cage with the featherweight veteran this weekend in Florida.

“I feel like I was supposed to lose that fight just so I could fight ‘The Damage’ this time,” said Landwehr, finding a positive spin to his January setback. “Everything happens for a reason and I feel like if I would have won this fight, I would have been in a different bracket, so I feel like everything set me up for this great fight that’s about to happen.

“This fight is going to put me in direct contact with every single person in the division. If he hasn’t fought you, he’s fought somebody that has fought you, so this is going to directly connect me to everybody in the Top 20.

“And after I do what I do how I do it to him, I feel like it’s just going to skyrocket me to where I need to be.”

While “Six Degrees of Darren Elkins” is definitely a fun and viable game to play in the featherweight division — if not the entire UFC roster for that matter — there are no guarantees that Landwehr is going to get the result he’s seeking and the subsequent push towards the rankings he envisions.

But he knows that and he’s okay with it, because as much as reaching the summit is the ultimate goal, Landwehr believes the real value is in the journey and he just wants to give the fans their money’s worth each and every time he steps into the Octagon.

“Every time I fight, somebody is getting that bonus and it’s going to be something to watch; it’s kill or be killed,” he said, reiterating his approach.