Finding success in the fight game requires a special level of motivation. Some fighters focus on who they fight – legends, tough matchups, willing dance partners – while others zero in on where the sport can take them in terms of fame, money and stature.  Some just find mixed martial arts as what they’re good at and decide to refine their craft over time and competition.

For Nate “The Train” Landwehr, he is more concerned with the why and the how. The latter is simple.

“I’m going to do it the way I do it,” he told UFC.com. “I’m never going to alter the way I prepare and the way I go in there and fight.”

As for the why, it’s probably just as easy to spell out, but to hear Landwehr explain it is to understand the love the Clarksville, Tennessee native has for entertainment through violence.

“A long time ago, this cat told me, ‘They don’t remember you. They just remember that feeling that you give them when they seen you,’” he said. “You know what I mean? So, when I fight, I want to give you that feeling that this is going to be a motherf***ing fight. Think about it. When Gaethje fights, it’s like, ‘Damn, we’re about to watch this fight.’ I want to put my name on the list that you ain’t on your phone, homie. You ain’t going to the bathroom. You ain’t going to get no popcorn. You ain’t over here surfing (on the Internet). You’re tuned in, and you get a certain little feeling in your stomach because you know it’s about to be a damn good fight.”

In two UFC fights, Landwehr has certainly delivered, albeit with mixed results. His long-awaited debut came against fellow featherweight prospect Herbert Burns and ended in the first round when Burns knocked him out with a flush knee.

Unshaken, Landwehr even posted the knockout on his Instagram for all to see with part of the caption saying, “Live by the sword, die by the sword.” Four months later, he returned with a unanimous decision win over the always-tough veteran Darren Elkins to score his first UFC win.

“I do not fear failure, and the main thing is just my mentality, my mindset and my willpower. There’s nothing that this world can throw at me that I won’t be good with…it’s because I keep my circle tight, and all my people love me. What are they gonna do? They’re gonna treat me different when I get knocked smooth out by a knee in the first round? Hell no. They’re gonna still love me. I figured that out the hard way. My people are my people.”

That loyalty to his family, team and community in Clarksville is something Landwehr holds close to his heart. That heart is always on his sleeve, and he relishes the platform it gives him in the city to unite people when it’s his turn to fight, as well as inspire youth. That spills over into how he handles his business as well. After he beat Elkins, Landwehr said he was particularly proud of beating someone training out of a notable gym like Team Alpha Male. 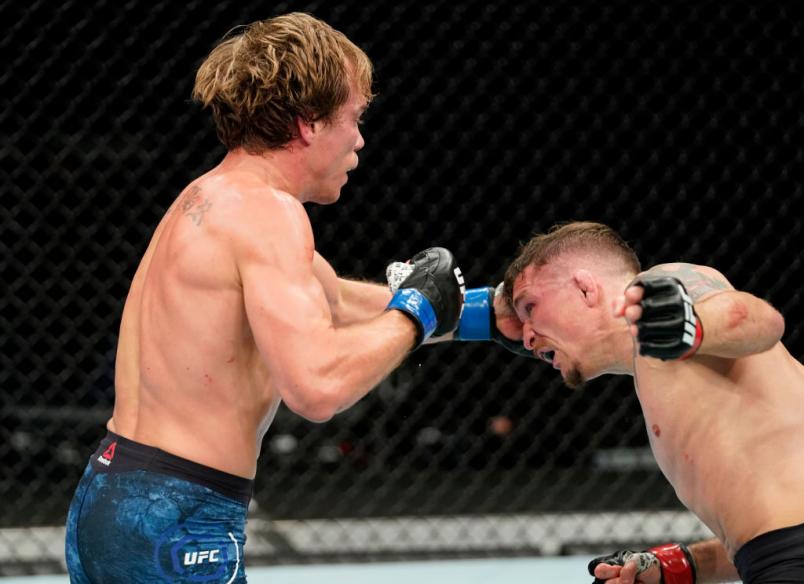 “I’m a strong believer in community over everything,” he continued. “Think about it. If we didn’t listen to the radio, listen to no news, we wouldn’t know s*** about what happened around the world, but you’ll know what’s happening in your own neighborhood. You’ll know what’s going on in your own circle, and I think that’s the most important.”

He was excited to make the point again when he was scheduled to fight Shane Young, a City Kickboxing product, on Fight Island before that fight fell through when Landwehr tested positive for COVID-19.

Although he was forced to stay home instead of making the trip to Fight Island, Landwehr is thankful that he was able to be home when his mother-in-law passed away after battling cancer.

“That September fell through because of COVID but it was a blessing in disguise because I was going through some things with my mother-in-law. She had been fighting cancer for two years and I was scheduled to fly out, but since I couldn’t, I was there when she passed away that following Friday,” Landwehr said softly. “No fight was worth not being there for that. I felt blessed by that and now I’ve been working five months for this one moment so I’m just ready to get in there and show the world once again why I am ‘The Train.’”

In his return to the Octagon, Landwehr faces undefeated Russian prospect Movsar Evloev in what is actually a relatively familiar situation. Both fighters were champions in the M-1 promotion – Landwehr the featherweight champ, Evloev the bantamweight champ – and Landwehr made it a habit of beating highly-touted Russians during his time in the promotion.

It’s a great bit of matchmaking between two 145ers hovering around a shot at a top 15 opponent in the ever-deep featherweight division, and Landwehr expects to take full advantage of the opportunity. 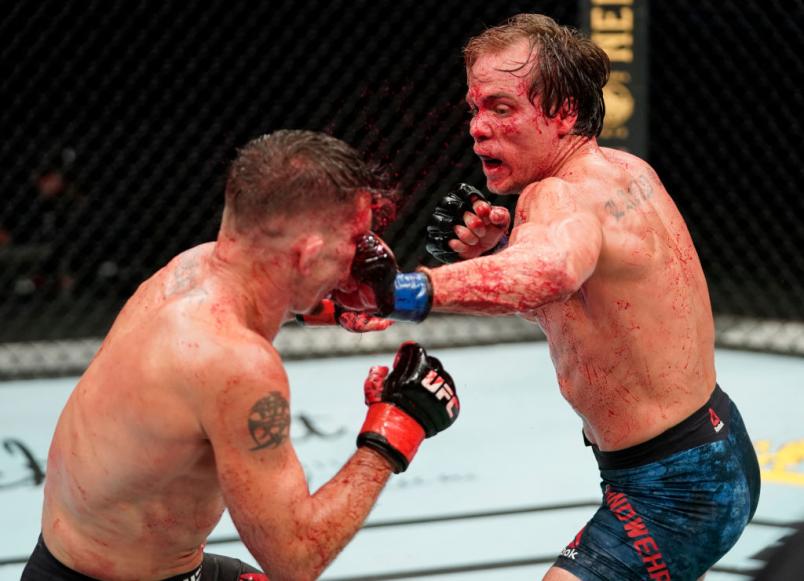 “He’s solid, he’s a solid dude. He’s not a bantamweight now, he’s bulked up to the featherweight class, but I don’t think he’s fought anyone that’s trying to mangle him,” Landwehr said of Evloev. “I’m trying to hurt him, I’m trying to get him out of there. No one has the will and the skill like I do. Everybody is good, but everybody doesn’t come for the same reason that I come for. I come for a different reason and you’re going to find out on Saturday.”

Naturally, Landwehr doesn’t just want to win. He wants to entertain, and in his mind, nothing is more entertaining than a finish, which is all part of the full “Nate the Train” experience, including something the aforementioned Justin Gaethje has made his signature after a win.

Beating Evloev in a definitive fashion would be enough to turn heads, but Landwehr isn’t one to tactically break an opponent down. It’s going to be a brawl, and risks are going to be taken. It’s what ended his night early in his UFC debut, but it’s also what got him to the UFC. If there’s anything we should know about Landwehr in his short time in the promotion, it’s that he’ll unapologetically show up the only way he knows how, and when asked what kind of statement he hopes to make, he echoes everything he and his fights have shown to this point in his career.