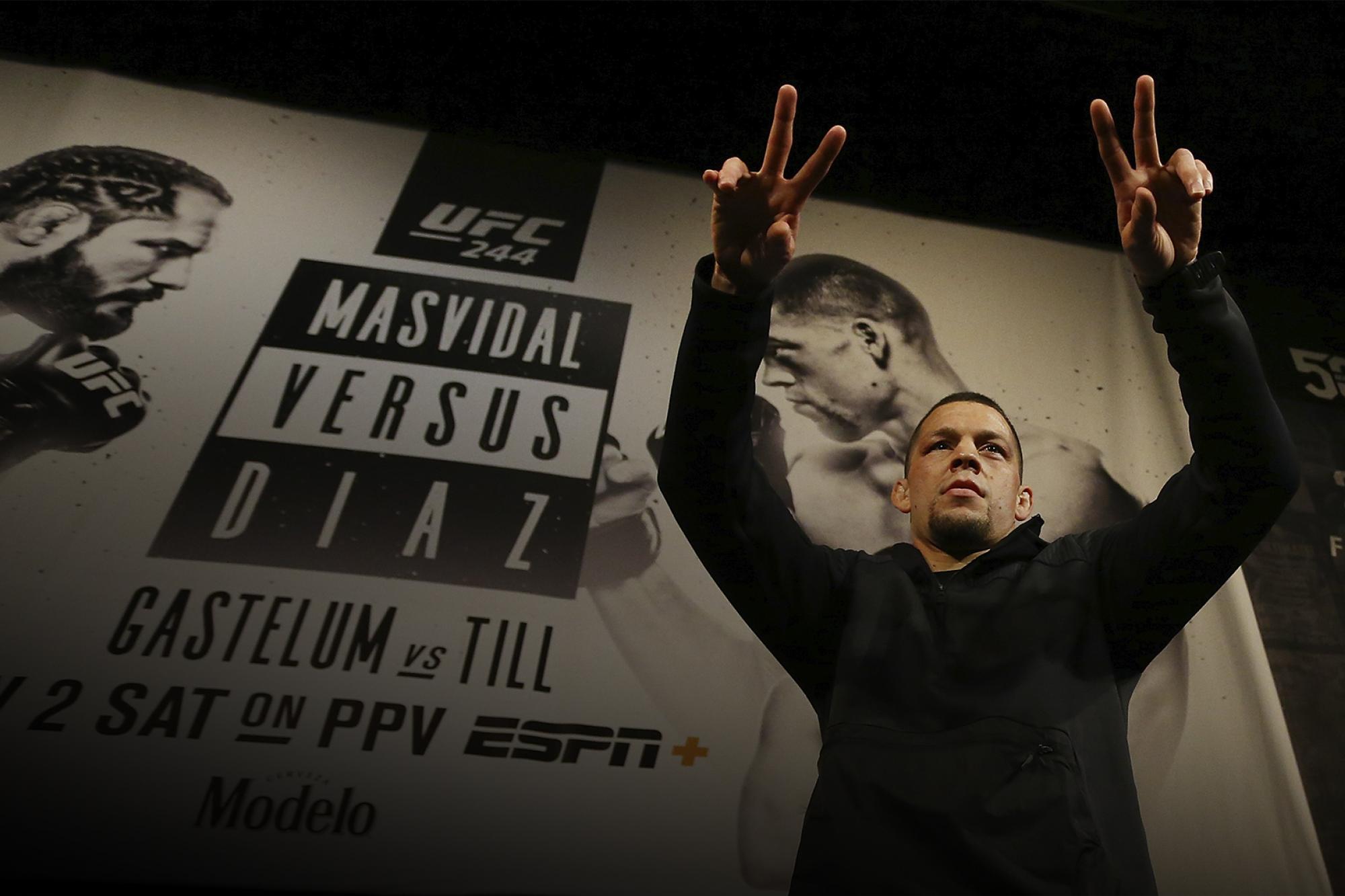 Nate Diaz Will Be A Fighter Forever

“I think I’ll be doing it forever,” said Diaz, who promises to bring the fans what they want this Saturday.
By Thomas Gerbasi, on Twitter: @TGerbasi • Nov. 1, 2019

Jorge Masvidal may have gotten all the attention for his previous exploits as a street fighter, but don’t cut the man he’s fighting in the main event of UFC 244 – Nate Diaz – out of the conversation, as he had his share of scraps as a high schooler.

“It was already a dramatic thing in the beginning,” said Diaz of his days as a ninth grade battler. “Third period, fourth period it built up, then there’s a hundred people at the park wanting to watch you fight. I got started right there.”

At one of the fights, Nate’s older brother Nick showed up, checked everything out, and then left after the police broke the fight up. Once home, Nick packed up his gear to go train.

The response was classic Nick Diaz.

“You better come and train with me after that performance you put on at the park.”

“I grabbed my stuff and went to the gym,” smiled Nate, who added, “It’s been game on since.”

That’s an understatement. Now 34, the youngest of the Diaz brothers is a legitimate superstar in mixed martial arts world, the one who has done this all his way, even if sticking to his guns has cost him at times. Diaz sees his path to this point as similar to that of Masvidal, and his respect for his upcoming opponent is evident.

“Jorge Masvidal is someone else who has put in the work and time at a high level like I have,” Diaz said. “I’ve been fighting top ten fighters since I was 21. I’m 34 now. And I’ve seen him do the same thing in his career.”

So when Diaz ended a three-year hiatus from the Octagon with a win over Anthony Pettis in August, the first and only name to come out of the Stockton native’s mouth for a future fight was Masvidal’s.

“I called for him for the sake of fighting because it’s a real fight,” Diaz said. “I’m only fighting real fighters who are trying to take me out.”

Masvidal, winner of two straight over Darren Till and Ben Askren, will do just that. But in breaking down his foe, Diaz talks of an unofficial scrap Masvidal had with Leon Edwards backstage after the two won their official bouts on the UFC London card in March.

“He (Masvidal) has got the same type of mindset I do,” said Diaz. “The guy was talking s**t to him and he walked to up the guy and he hit him. He still treats this like a fighter. That’s gonna be stuck with me forever. I’m a fighter first. And that’s a worthy opponent to me.”

“I think I’ll be doing it forever,” said Diaz, who promises to bring the fans what they want this Saturday.

“It’s war and that’s what I enjoy watching,” he said. “If I was just a straight fan of the sport, I would like a good war and I appreciate that because people forget that’s what we tuned in for.