"I want to represent for my team just as well as myself and it’s motivating to work hard and not let them down." - Nate Diaz 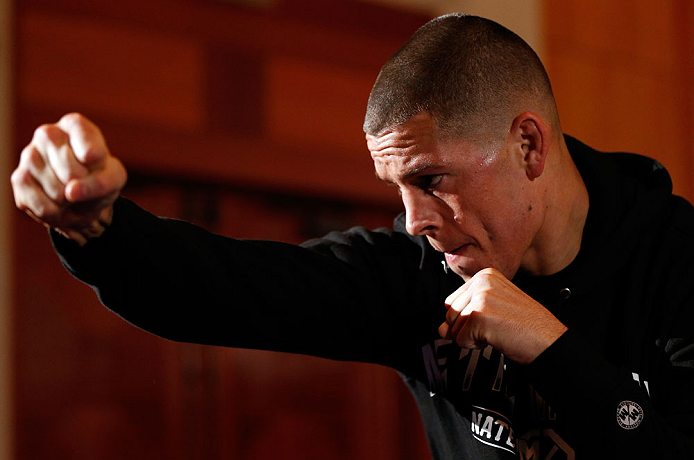 Nate Diaz has been around the fight game long enough to know that you don’t count your money before it’s in your hands. In other words, he won’t start thinking about how life would change for him as UFC lightweight champion until he actually wins the belt, a task he’ll undertake against Benson Henderson this Saturday in the UFC on FOX 5 main event.

“I try not to put too much thought into it,” said Diaz. “I think the problem with a lot of people is that they put this big ol’ glorified imagination on things and they think about all the positive things, and I try to visualize and think more so about the negative parts than anything and make sure I prepare myself so those things don’t happen. So I haven’t looked past the 8th.”

It may be one of the most honest answers you’ll hear from a prizefighter, but that’s par for the course when it comes to the 27-year-old Diaz, who laughs when you point this out to him.

“I’m not gonna lie,” he said. “I am spending time thinking on the big meals I’m gonna eat (after the fight) though.”

Watching Diaz go through the whole process of rising up the lightweight ranks and now getting ready for the biggest fight of his eight year pro career has been an interesting one to say the least, particularly when it comes to the championship, something you’ve never really heard him spend too much time talking about, at least not compared to those who have made it a career obsession to strap the gold belt around their waist. So does it mean as much to him as it does other fighters, or will he be content if he wins just knowing that he will be considered the top 155-pound fighter in the world?

That statement about his teammates shouldn’t come as a shock to anyone who has seen the members of the Cesar Gracie Fight Team in action. Loyal to the end, if you’re a member of that squad, it’s more than just having some training partners to work with. It’s a total commitment, and Diaz has been all in from the beginning.

“I want to represent for my team just as well as myself and it’s motivating to work hard and not let them down,” he said. “Everybody works hard for each other, so it’s good. We all care about each other, we’re all friends, and it’s my brothers, so it’s good to have people that are fighting at the higher level than me too and have been for years, so I can take their advice, and I trust them.”

Those teammates, which include his brother Nick, Gilbert Melendez, and Jake Shields, among others, have prepped Diaz for Saturday night ever since he first walked into the gym and began studying jiu-jitsu. Years later, he’s a black belt in Gracie Jiu-Jitsu, he’s got 16 pro MMA wins under his belt, and he’s one win away from being crowned a world champion. That’s a lot for anyone to take in at once, but if anyone is going to be unaffected by fame and a sudden life change, it’s Diaz, who has never strayed from the path he’s been on or from the people who have surrounded him over the years.

“I started out with the same people when I was a kid before I trained, and I still have the same friends I had growing up too,” said the Stockton, California native. “I would go to big events and parties and stuff when I was a kid, and we always had a good group of friends where if we went places and got into problems, we always came out alive and we all came out together because we knew that we all cared about each other. I think it’s good to surround yourself with people you care about and that care about you, and you all trust each other, and then you don’t have to worry about problems and s**tty stuff happening.”

That mentality has carried over into his professional life, and while he doesn’t disparage those who gym jump, he doesn’t agree with the practice or understand it either.

“You fight by yourself, but you didn’t get that way by yourself,” he said. “It’s a team sport and everybody helps you get to where you’re at. Some people don’t know any different and if they’re trying to better themselves I can’t hate anybody for trying to better themselves and try to train hard and come up the best way they can. But I think they kind of got the wrong idea about things also.”

Another thing that baffles Diaz is seeing some of his peers who forget that when the Octagon door closes and the bell rings, it’s a fight. Sure, there are rules, judges, and a referee, but it’s still a fight. Diaz has never forgotten that, and he’s become a fan favorite for that attitude, which he says comes on before the ink is dry on the contract.

“I know that once it’s time to fight, it’s time to fight, and it’s been that time since the contract was signed,” he said. “It is a fight, and to me it’s not some sporting event, and to anybody it shouldn’t be like that. They can try to make it as much of a sporting event as they want and portray it as that, but it’s a fight, and whether they’re saying it or not, they’re in there to damage me, finish me, knock me out, and they would definitely rather win by knockout or submission than by decision. So I’m not gonna make it like this is some fancy sporting event; it’s a fight and we’re at war, so I’m trying to take him out just like he’s trying to take me out.”

Diaz pauses, yet before he answers the next question posed to him, he makes sure to clarify a point, saying “I don’t like to hurt people. I don’t want anything bad to happen to the guy, but as long as we’re fighting, I’m gonna do my best to do the damage while I’m in there because he’s trying to do it to me.”

All of this leads to the conclusion that his showdown with Henderson has the potential to be one for the ages. For his part, Diaz knows that it won’t be a walk in the park.

“He’s gonna be a tough fight,” said Diaz of Henderson. “He’s a good athlete and he’s definitely gonna be a difficult guy to deal with, but I’m trying to prepare myself the best I can for it.”

And as the hours wind down and all the hard training is done, it’s up to Diaz to pull all his years of hard work and knowledge and put it into one career-best performance. It may be his first UFC title fight, but he’s no neophyte when it comes to big fights, having competed in his own while also being side-by-side when big brother Nick fought his biggest bouts.

“I’ve seen advice come out of him without him trying to give me advice because I’ve been right there with him and I’ve seen it all go down,” said Diaz. “I’ve been in some big fights myself, but yeah, he’s been in a lot of title fights and there’s been a lot of hype behind him so I know everything that’s coming.”

In that case, is a title going back to Stockton on Sunday morning?

“We’ll see what happens,” he chuckles. “I gotta fight.”