Nate Diaz: It's Time to Fight 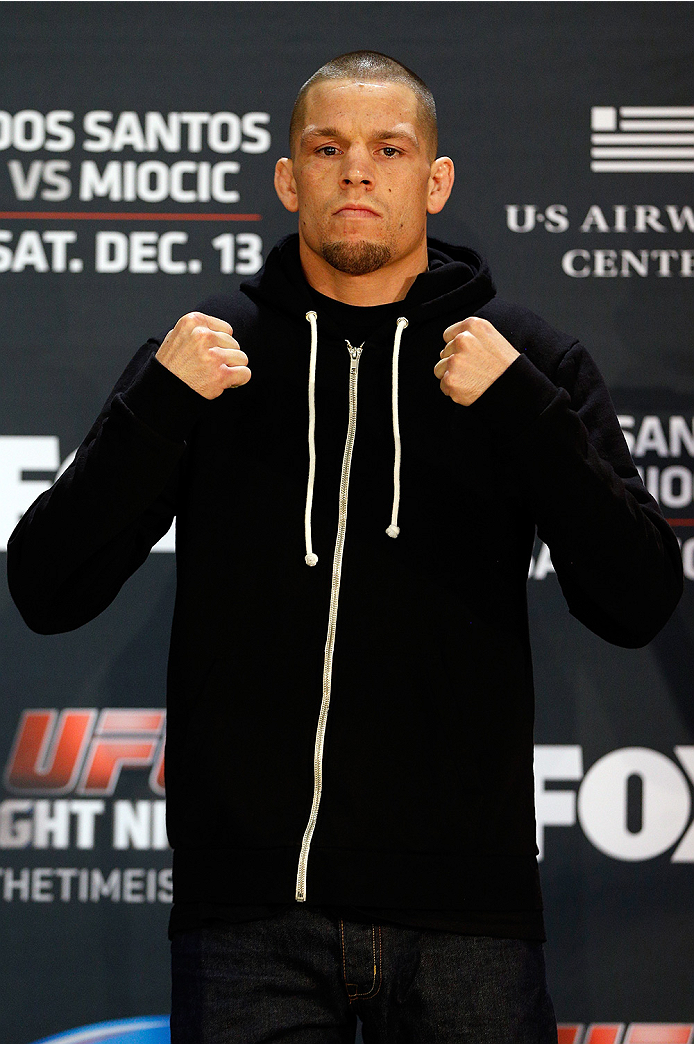 Nate Diaz may not have stepped into the Octagon since November of 2013, but that hasn’t dulled the Stockton, California native’s appeal in the least. He knows it too, referring to a recent video he saw promoting tonight’s FOX card in Phoenix that still had him in a featured spot despite his recent absence.

“I get a lot of love and support and I appreciate it,” Diaz said.

So what’s the secret? How can Diaz still garner such attention and support when he hasn’t fought in over a year? He chalks it up to his previous activity level in the Octagon, where he regularly put in three fights per annum against top opposition. That dipped to twice a year in 2012 and 2013, but he is quick to remind his peers of his past.

“They’ve got a lot of catching up to do,” he said. “Before they talk s**t they need to check their facts and realize that even with the year not fighting, I’ve been working harder than everybody.”

He may have a point. Out of action since a blistering first-round TKO of Gray Maynard last year, Diaz may have had his issues with the UFC since then, but he hasn’t stayed out of the gym.

“I didn’t really take a break,” he said. “With the people I’m around, I’m getting better all the time. I’m training with Kron Gracie a lot, so it feels like my jiu-jitsu is always improving, and I’ve got my whole team – my brother and whole bunch of guys that are helping me get better. I’m also boxing with my coach and I always feel like I’m improving and learning new things.”

Diaz also spent time in Vegas as an assistant coach to Gilbert Melendez on season 20 of The Ultimate Fighter, and he’s worked with two rising stars from the world of boxing, Alan Sanchez and Brandon Gonzales. But training isn’t fighting, and while Diaz has been keeping sharp, there’s nothing like doing it with the money on the line, so tonight, it’s a date with dos Anjos.

“He’s a great fighter,” Diaz said of the Brazilian. “He’s got a black belt in jiu-jitsu, good wrestling. He punches hard obviously because he knocked out Ben Henderson, so he’s definitely a good, hard opponent to have to deal with. I train hard for everybody and I’m always here to win. That’s my objective, and I’m gonna have to go out there and find out what happens.”

At this point, the beauty of watching Nate Diaz is that you don’t know what’s going to happen, in or out of the Octagon. At yesterday’s weigh-in, he came in at 160.6 pounds, more than four pounds over the 156-pound limit. During fight week, he spent more time talking about the recent signing of former WWE star CM Punk than dos Anjos. But some fighters are at their best in the midst of chaos, and the 29-year-old Diaz certainly fits that mold.

But 29 years old? It seems like Diaz has been “the kid” for years, the younger brother of Nick Diaz trying to make his way to the top. Now he’s approaching 30 years old. Is he starting to feel old?

“I feel the same way I did when I was 17, 18,” he said. “I see other people my age that are starting to feel old, and I think you only get old when you start thinking you’re old. I’m ready to rock. I don’t know how long I can do this, but I know I feel just like I did when I was younger.”

So what’s the secret for his longevity in this game?

Guess that counts me out.

It’s a moment of levity with Diaz before battle, and for all the extraneous stuff that seems to hover around Nate and Nick, the battle’s the thing, and after all the ups and downs, Diaz the younger has lasted longer here than most. That’s a badge of honor for him, even if he won’t describe it as such.

“They (the UFC) got a bunch of new guys that they’re trying to figure out what to do with,” he said of the lightweight division. “They’re all tough, they’re all good guys, but it’s hard. I’ve been in the UFC going on eight years now, and nobody in the division has been in there that long. Guys can be tough for a couple fights, but it’s hard to stay relevant and stay around. I feel like I’m the only one who’s been relevant in the division for the last seven years.”

Now he has to keep it going, and he’s fine with that.