His UFC Debut Was His Lone Pro Loss, But He's Determined To Put It In The Rearview Starting Saturday
By Thomas Gerbasi, on Twitter: @TGerbasi • Apr. 28, 2022

Natan Levy admits he wasn’t the life of the after-party following the first loss of his professional MMA career against Rafa Garcia last November. But with his wife, brother, best friend and teammates and buddies in town for what was expected to be a celebration of his UFC debut, there were appearances to be kept.

“On the inside, it was a pretty dark room, but outside, I had everybody that supports me around, so, of course, it's not the end of the world,” he said. “I was devastated by it, but I don't think crying about it is gonna help.”

Levy didn’t get run over by Garcia, didn’t get embarrassed. It was a close, three-round prizefight, and when it was over, the decision didn’t go his way. That might have been expected for Levy after a yearlong layoff, one that was a factor, as much as he doesn’t want to admit it. 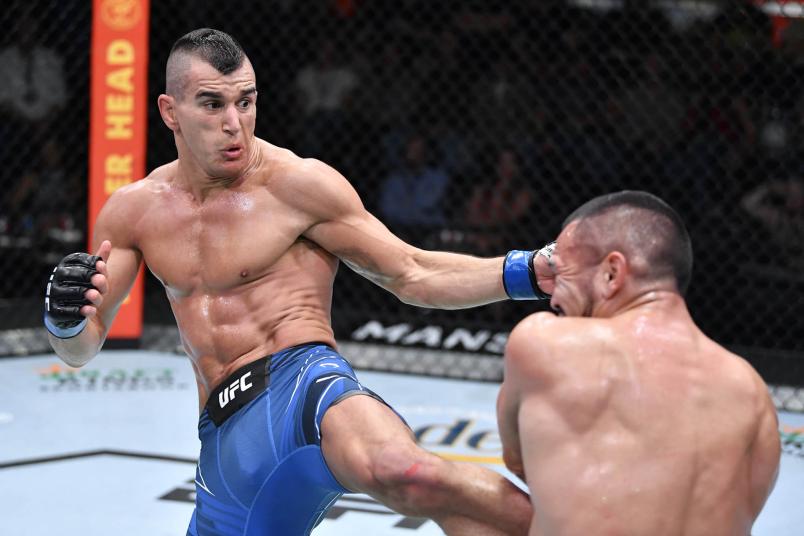 Natan Levy of Israel kicks Rafa Garcia of Mexico in a lightweight fight during the UFC Fight Night event at UFC APEX on November 20, 2021 in Las Vegas, Nevada. (Photo by Chris Unger/Zuffa LLC)

“I definitely felt it,” he said of the time between his win on Dana White’s Contender Series and his Octagon debut. ”But I can't make any excuses. I think I should have beat him off a five-year layoff, but it is what it is. Maybe we fight again and it goes a different way - I think it could, but I'm going to take my lessons from it and improve upon it.”

Levy reflects on his lone pro defeat, then continues with his thought.

“The only thing you can do about it is get back to training as soon as possible, stay positive and, at the end of the day, if I had to give advice to someone else, I would tell them, just move on. You fight, sometimes you win and sometimes you lose. Just keep pushing. Of course, for me at the moment, it didn't feel like that. It felt a little bit like, ‘Oh, what's gonna happen with my career?’ and ‘I can't believe I lost to this guy.’ But I gave myself my own advice and I just kept pushing, got back to training as soon as I could, and I know I can still reach all my goals. The number on the record honestly doesn't mean much. We all lose rounds in the gym, we all lose jiu-jitsu tournaments or wrestling tournaments or whatever it is; nobody's really undefeated. If you fight, sometimes you lose. That's life.”

Fighting is still a work in progress for the 6-1 lightweight prospect, who returns to action this Saturday to face Mike Breeden. But when it comes to life, the 30-year-old appears to have that part figured out, or is at least a lot further ahead than most of us. And that’s helped him with perspective, especially since he didn’t fall out of the sky and into the Octagon. He’s paid his dues to get here.

“For me, it wasn't just cross the road, go to an MMA gym and start fighting,” said Levy, who was born in France and raised in Israel. “Everything was a struggle. Saving money to fly to the U.S., flying to the U.S. and not knowing anybody, riding my bicycle 20 miles in each direction to get to the gym because I couldn't afford a car. Everything in my life has been a struggle in this game. I would fly to the U.S., stay for the whole period of my visa and then fights would get canceled and I'd have to go back home without a fight, back to working security and other s**tty jobs. So, for me, the moment I get to fight, that's the thing I'm thankful for. I'd rather fight and give it my everything and lose on the judges' scorecards in a close fight than not be here and not get to fight. So I'm lucky to be here, I'm lucky I get to fight. Fighting for the UFC was a dream come true, but the real dream, of course, is to win the next one and to get my name out there and to reach the highest pinnacle of the sport. So it's not over yet.” 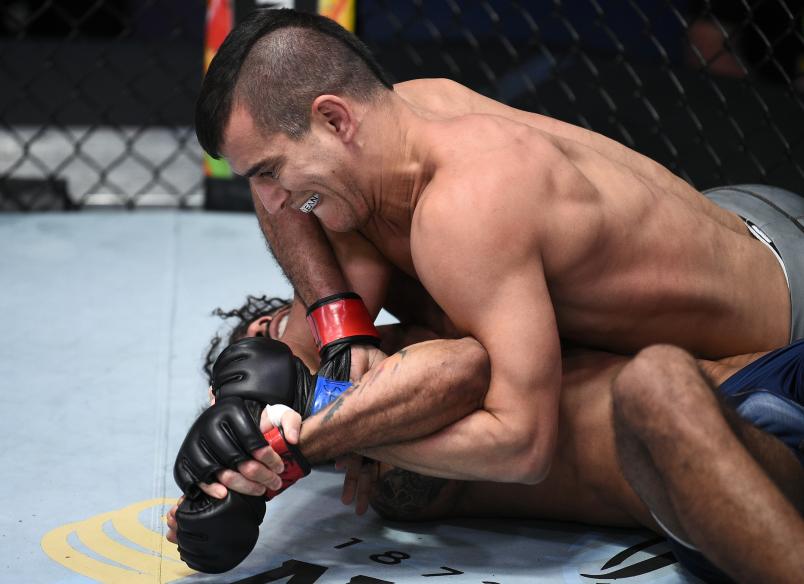 No, Mr. Levy, it’s not. It’s just beginning. And all the adversity will do at least one thing: it will keep a fighter hungry. And even if Levy gets to the top of the lightweight division, he doesn’t expect to lose that.

“I think I'll cross that bridge when I get there (Laughs), but yeah, of course, for those who get the world championship and want to keep fighting, it's a different mentality, a different type of hunger,” he said. “You've always got to find your reason to train so hard and fight so hard. It's very easy to lose the hunger, and I can only imagine that when you have millions in the bank and everybody knows who you are, it's very easy to retire and just call it a day, which I completely respect, but I have even more respect for those who stay hungry and keep working hard and fighting hard.”