Natal Eager for a Win and a War

"I’m very happy to face Chris Camozzi. It will give me an opportunity to show the UFC and the fans more of my improvement in the stand-up game." - Rafael Natal 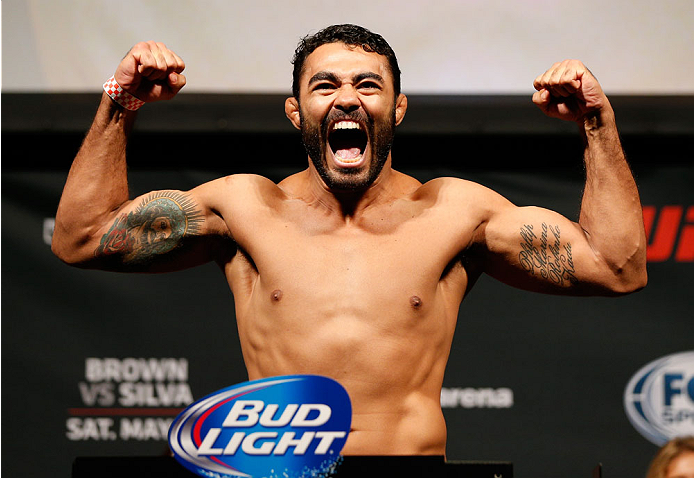 A year after their scheduled fight was shuffled amid injuries, UFC middleweights Rafael “Sapo” Natal and Chris Camozzi will finally face off at UFC Fight Night: Jacare vs Mousasi on Friday at Connecticut’s Foxwoods Resort Casino.

Sapo is looking to break a two-fight skid in which he suffered a knockout defeat at the hands of Tim Kennedy last November, and then dropped a close split decision against Ed Herman in a grinding match at UFC Fight Night in May.

“I’m very happy to face Chris Camozzi,” he said. “It will give me an opportunity to show the UFC and the fans more of my improvement in the stand-up game. I have been working on my Muay Thai and boxing with Phil Nurse and I have been getting a lot of help from (Renzo Gracie Muay Thai instructor) Elijah Clarke also.”

Natal’s fight camp is sprinkled throughout New York and New Jersey, with him splitting time between Renzo Gracie Academy in NYC, Ricardo Almeida’s in Hamilton, NJ and Edge MMA in Hoboken, NJ.

“At Edge I work on my wrestling with coach Mario Mercado, and at Ricardo’s I train boxing with Mark Henry and spar with Edson Barbosa and the guys down there, so I’m constantly mixing things up. I am known more for my jiu-jitsu, but I’ve been working hard on my wrestling.”

In Camozzi, Natal faces an aggressive southpaw who is looking to snap a three-fight losing streak himself, so the pressure will be on both fighters to get back in the win column.

“Every fight there’s pressure to win,” Natal says. “But we are both feeling it a bit more this time because of the losses. Camozzi is a very tough fighter. He’s got good striking, but his takedown defense is not very good, so if I take him down he’s going to have trouble with my jiu-jitsu.”

Indeed, Natal’s credentials in the ground game are impressive. He was awarded his black belt by Vinicius “Draculino” Magalaes, and in 2005, he was a Brazilian jiu-jitsu world champion. He also won the Pan Am Games No-Gi Championships in 2008 and is a professor at Renzo Gracie Academy along with John Danaher and world champion Luciano Cristovam.

But Natal has shown marked improvement in his stand-up game since he started training with Henry, who is also Frankie Edgar and Edson Barboza’s striking coach.

“Mark is one of the best strategists and he’s constantly drilling, drilling, drilling,” Natal says. “We have a good game plan against Camozzi, and I will follow the plan and win the fight. My family, my coaches, they deserve this win. The people who believe in me deserve this win, and the fans deserve to have a great fight to watch. Chris is a fighter who always brings everything he has to a fight, so it will be entertaining for sure.”

Against Kennedy, “Sapo” looked good on his feet, trading blows with the veteran Green Beret before getting caught with a sweeping left to end it in the first round.

“He was on his way to a great fight,” Mark Henry says. “He was implementing his game plan, mixing things up well and he just got caught. In the Herman fight he didn’t ever really let go and take chances. Sapo has excellent head movement and his footwork is getting better every day. He’s a goer. Camozzi’s a goer. This time he’s going to go to war. Look for Sapo to let his hands go more than you’ve ever seen him do. Camozzi’s going to be in for a long night.”

“I was landing good shots against Kennedy,” Sapo says. “I was really disappointed because I knew I was doing well before I got caught, but it happens. I talked to Dana White after the fight and he told me it was a good fight, and that made me feel better about it. I thought the Herman fight could have gone either way, but it was a good fight for the fans.”

Living in New York City by way of Belo Horizonte, Brazil, this fight is like a home game for Natal considering Foxwoods is just a few dozen miles up Interstate 95, and Sapo is excited about the prospect of having his family and teammates in the arena to support him.

His father could bring him luck. The last time he was at one of Sapo’s fights, he won a Fight of the Night bonus in his hard fought win against Tor Troeng in Belo Horizonte, Brazil last September.