With Momentum On His Side, French Middleweight Nassourdine Imavov Is Excited To Keep The Ball Rolling Against Top 15 Ranked Edmen Shahbazyan.
By E. Spencer Kyte, on Twitter @SpencerKyte • Nov. 4, 2021

Nassourdine Imavov made his UFC debut 13 months ago, collecting a unanimous decision win over Jordan Williams on Fight Island that extended his winning streak to six and got his foot in the door in the UFC middleweight division.

This weekend, the talented 25-year-old fighting out of Paris’ MMA Factory squares off with Edmen Shahbazyan in a clash of young talents, with a place in the Top 15 hanging in the balance.

“Everything has gone very fast, but the Management Factory is doing a good job, the UFC matchmaking is doing a good job,” Imavov said through his coach, Fernand Lopez, who served as translator when we spoke on Wednesday afternoon about his meteoric rise in the middleweight division. “I feel like they’re relying on me as the future of the UFC, so I will keep doing what I’m doing to make sure I keep going forward.”

It’s not often that an athlete goes from 0 to the Top 15 in the span of four appearances and just over a year, but rapidly rising through the ranks is becoming de rigueur for members of the French outfit.

The first athlete to put the gym on the map in the UFC was current heavyweight champion Francis Ngannou, who began his MMA journey under Lopez’ guidance and earned a championship opportunity with six straight stoppage victories over a two-year period to start his time competing inside the Octagon.

Next came Ciryl Gane, the unbeaten interim champion, who will face Ngannou in a title unification bout at UFC 270 on January 22 at the Honda Center in Anaheim, California. Three years and six days after making his professional mixed martial arts debut, the 31-year-old “Bon Gamin” collected a third-round stoppage win over Derrick Lewis in the main event of UFC 265 to claim gold, extending his record to 10-0 overall, with the last seven of those triumphs coming in a two-year stretch fighting under the UFC banner.

And now there is Imavov, barely a year into his time on the roster, but already knocking on the door of the Top 15 following a technical and emphatic second-round stoppage win over Ian Heinisch in July. 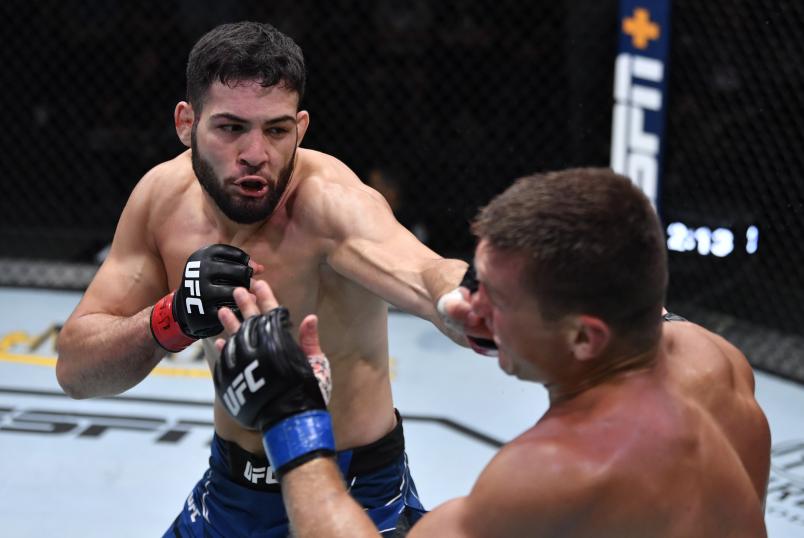 “This kid is something different,” said Lopez, who clearly has an eye for talent and a knack for developing contenders. “He has the same mindset as Ciryl Gane — very humble, very simple, very gentle, but very mean when it comes to the fight.

“He has the same abilities as Ciryl too — he’s very smart, a big IQ — and I really think you should keep his name in mind because he will be the next big thing.”

“It’s so inspiring,” Imavov said when asked about watching his teammate claim championship gold this summer. “When you think that I saw Ciryl come in the gym and how he improved, that’s inspiring for me because I know now what it takes to become champ.

“I know now what obstacles I have to face to become champ, and, at the end of the day, I will get there at some point.”

The next obstacle for Imavov to deal with in his path to the top of the middleweight division is Shahbazyan, who is currently stationed at No. 11 in the rankings and enters on a two-fight skid.

“The Golden Boy” is 20 months Imavov’s junior, but has twice as much experience inside the Octagon, having raced out to four straight victories, including three consecutive first-round finishes to rocket into the rankings before running into veteran contenders Derek Brunson and Jack Hermansson in back-to-back appearances, resulting in the first two losses of his professional career. 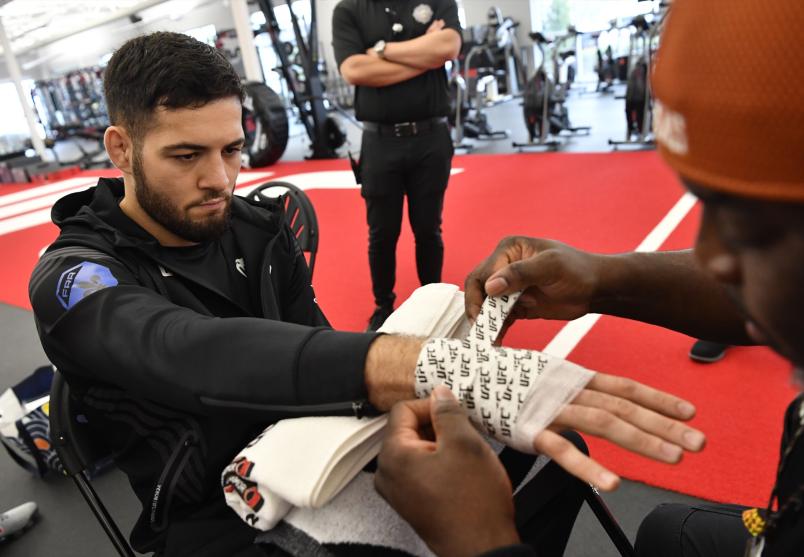 Nassourdine Imavov of Russia has his hands wrapped prior to his fight during the UFC Fight Night event at UFC APEX on July 24, 2021 in Las Vegas, Nevada. (Photo by Mike Roach/Zuffa LLC)

Two years ago, Shahbazyan was the one in Imavov’s position, riding high off a quality finish, entering a showdown with a ranked opponent at Madison Square Garden. The 23-year-old Californian of Armenian descent knocked out Brad Tavares with a head kick midway through the first round that evening at UFC 244, and Imavov has designs on doing something similar this weekend.

“I’ve been following Edmen Shahbazyan since the Contender Series,” the Russian-born middleweight began. “He’s a very well-rounded fighter, and I think it’s going to be a good fight. We had a good camp and I think we’re going to have a good fight.

“I have to finish this fight,” continued Imavov. “Every time I fight, it’s important for me to finish the fight, so I will try to finish because that’s the way I will introduce myself to the world and let people know that I’m here.”

An impressive finish on one of the biggest cards of the year in “The City That Never Sleeps” is a great way to make yourself known to the wider UFC audience, and if everything works out that way, Imavov wants to use his next appearance to show the world the improvements he’s made during the course of his rookie campaign.

“I think I would like to face a wrestler, because I need to show that I’ve improved my wrestling and that I can beat the good wrestlers in the UFC,” said the emerging middleweight, who dropped a majority decision to fellow UFC 268 combatant Phil Hawes in February, giving up four takedowns that amounted to more than 11 minutes of control time for the streaking Sanford MMA product, who faces newcomer Chris Curtis in on Saturday night.

While Lopez was adamant pretty early on that Gane was already the top heavyweight in the division and often grew playfully frustrated with his charge for being too humble when it came to speaking about his skills and ambitions, he’s a little more measured when it comes to his assessment of Imavov, preaching patience, but still projecting him to eventually join his teammate in having championship gold around his waist.