Nasrat Haqparast Is Prepared For Everything

Against all circumstances, Nasrat Haqparast made it to UFC 266.

In many ways, his journey to the Octagon was more difficult than his 15-minute bout with Dan Hooker. Haqparast was dealing with the loss of his mother, a myriad of visa issues, cutting weight on the plane from Germany to Las Vegas, and he then had to fight one of the most respected men in the lightweight division.

The thought of backing out of the bout with Hooker never even crossed Haqparast’s mind. He needed that fight, he needed to prove something to himself.

And even though he would go on to lose to Hooker by unanimous decision, that treacherous fight week helped Haqparast mature as a fighter and person.

“People have stomach pain, and they cancel a fight, people break their little toe and cancel a fight. Me, I had the worst circumstances a human could have,” Haqparast told UFC.com. “My mother passed away, I had visa problems, I arrived the night before the weigh-ins and cut weight on the plane. What’s worse? There is no worse case and now that I’ve had the worst case, I’m prepared for everything. “

The bumps and bruises that Haqparast has experienced so early in his career give him confidence that he’s going to break through sooner rather than later. 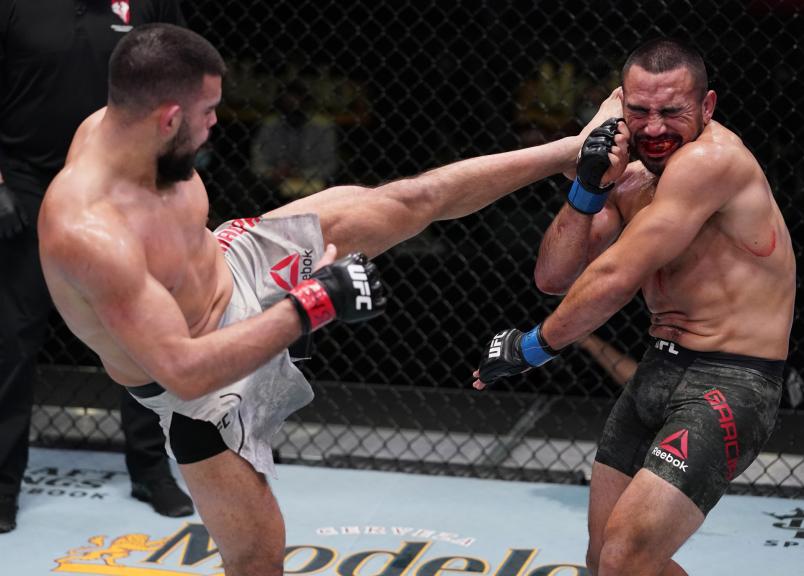 Nasrat Haqparast of Germany kicks Rafa Garcia of Mexico in a lightweight fight during the UFC Fight Night event at UFC APEX on March 13, 2021 in Las Vegas, Nevada. (Photo by Jeff Bottari/Zuffa LLC)

Nasrat Haqparast of Germany kicks Rafa Garcia of Mexico in a lightweight fight during the UFC Fight Night event at UFC APEX on March 13, 2021 in Las Vegas, Nevada. (Photo by Jeff Bottari/Zuffa LLC)

“Life is not only a flower garden; you have ups and downs. I would rather have them earlier in my career than later in my career because now I’m 26 and this is my ninth UFC fight,” Haqparast said. “I’ve had some huge wins and I’ve fought some good guys. The last guy was the number eight guy and I lost by a decision. This is experience and the next couple years I’m going to fight for the title, for sure.”

Haqparast’s ability to persevere through adversity helped remind him that even the things he believes aren’t possible can be achieved. That switch in mentality is the main reason that he’s so confident heading into his UFC 271 showdown with Bobby Green.

Haqparast is quick to acknowledge that Green has plenty of experience and his longevity in the UFC has been impressive. Green is exactly the type of challenge that Haqparast wants, and he’s confident that his experience matches up well with Green.

“This guy is experienced, and he knows how to survive for 15 minutes and I’m going to go in and have a very disciplined fight, execute the gameplan and dominate him,” Haqparast said. “I think this sport is all about skills and he’s skilled but he’s not the highest skilled guy I’ve faced.” 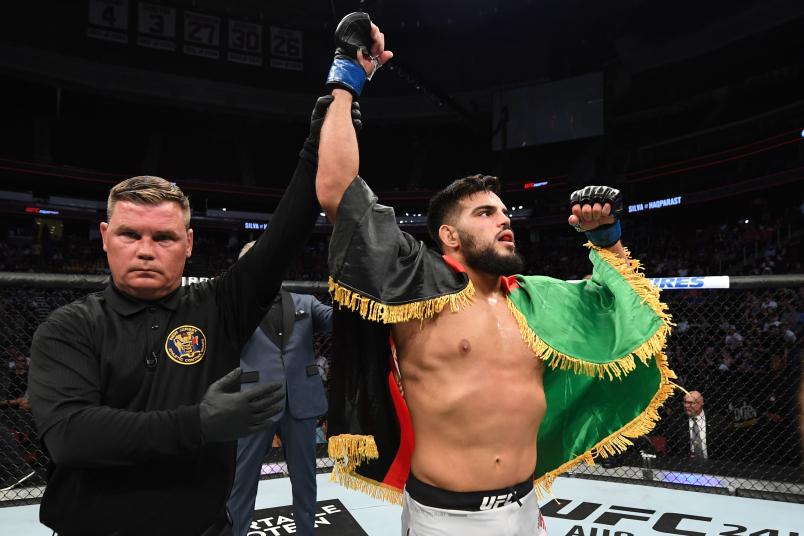 Nasrat Haqparast of Germany celebrates his KO victory over Joaquim Silva of Brazil in their lightweight bout during the UFC Fight Night event at the Prudential Center on August 3, 2019 in Newark, New Jersey. (Photo by Josh Hedges/Zuffa LLC)

In the lead-up to previous fights, Haqparast’s eyes would light up and he would be excited to face a guy like Green, but after everything that he’s been through, he truly believes he has turned over a new leaf. He doesn’t care that he’s on the PPV, he doesn’t care who the opponent is; all he cares about is the outcome of the fight.

“I don’t feel like I need to perform special because I’m not at that stage of my career anymore.” Haqparast said. “If you had asked me a couple years ago, I would have been like a little kid and be very nervous, but all those experiences and all those fights made me grow as a person a lot.”

This new and improved version of Nasrat Haqparast promises violence, discipline, and a renewed, mature approach to attacking Green.

And he’s confident it’ll be fun to watch.

“I will be very mature, for sure, but I’m going to come for violence,” Haqparast said. “I’m going to hunt him for 15 minutes. I’m going to dominate him.”