The Names Change, but Champion Frankie Edgar Remains The Same

"I know this can be taken from me at any time, so I gotta make sure I
work hard at it, and I’m just trying to enjoy every moment." - Frankie Edgar 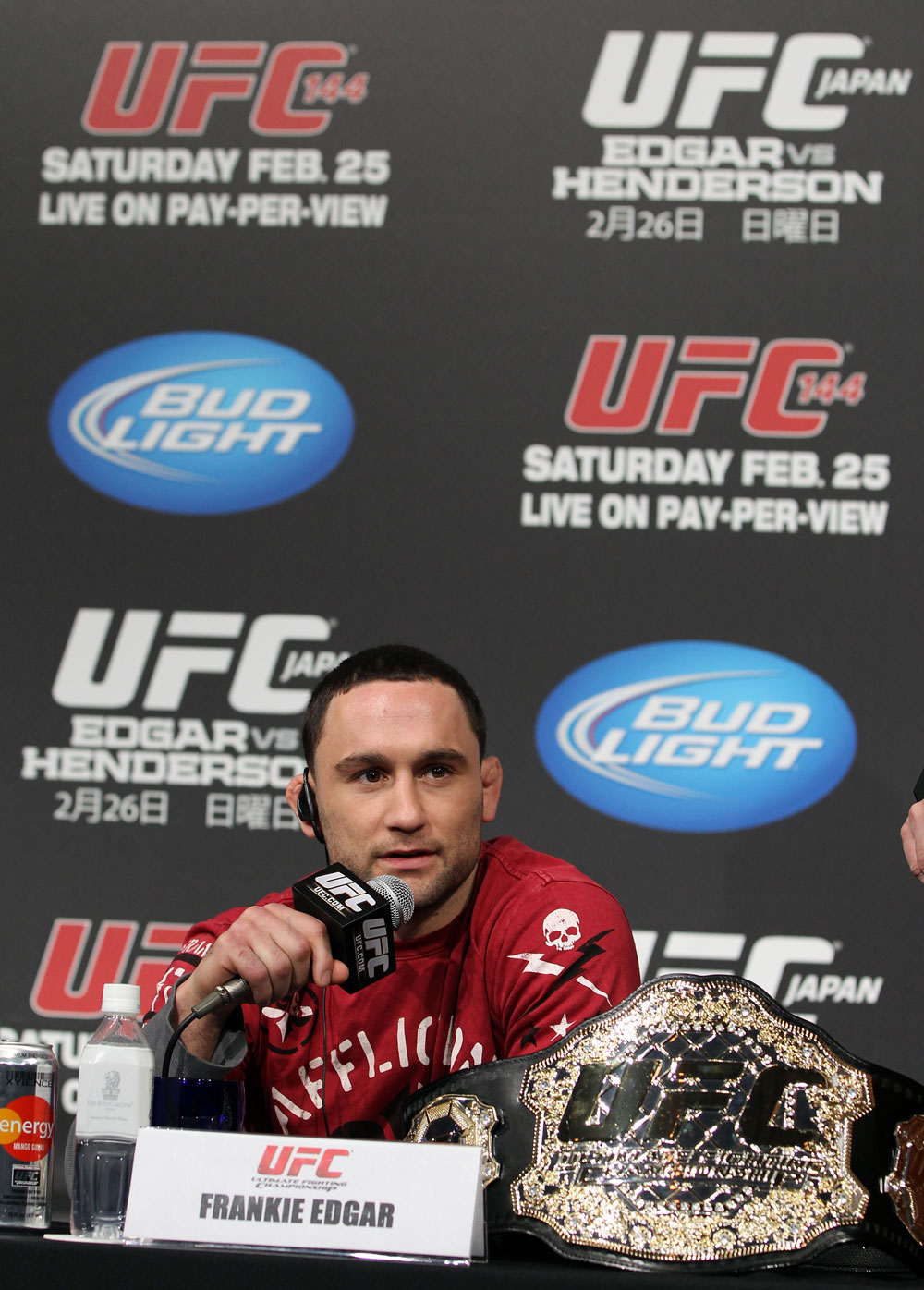 UFC lightweight champion Frankie Edgar’s underdog rise has been well-documented over the years, and rightfully so. But as his UFC 144 title defense against number one contender Benson Henderson approaches Saturday night at Saitama Super Arena in Japan, add this little tidbit to the growing legend of “The Answer,” the fact that when he began fighting professionally, the division he would eventually rule in the UFC wasn’t even part of the regular fighting rotation. So what was the eventual goal?

“When I first started the sport, the UFC didn’t have the 155 pound division,” said Edgar, who turned pro in October 2005, which was smack dab in the middle of the lightweight division’s 2004-06 hiatus in the UFC. “I was a little guy, and at the time Japan had a lot of little guys, a lot of shows, and I thought that maybe that was where I would have to have my career.”

Obviously that didn’t happen, but it is ironic that he now headlines for his sport’s biggest promotion in the country that he might have had to run to if he wanted to compete on the elite level of the sport. It’s just one of many twists and turns in the professional life of the 30-year old Edgar, who has remarkably kept his wits about him while still remaining the same kid from Toms River, New Jersey that he’s always been. In pro sports, that may be a bigger feat than beating BJ Penn twice.

“My family keeps me grounded,” said Edgar, a married father of two sons. “I’m the same person I’ve been since Day One, and I think it has to do with being from Jersey and having the blue collar roots. And it’s just how I perceive myself. I know this can be taken from me at any time, so I gotta make sure I work hard at it, and I’m just trying to enjoy every moment.”

That kind of attitude will get you two things: it will get you underestimated by peers who believe you can’t be humble and good at the same time, but more importantly, it will earn you respect from the people who matter: your family, friends, and the ones who actually pay to watch you fight.

In Jersey, that type of respect means something, and it’s afforded only to a select few. One of the fight game’s most notable recipients of that level of no-nonsense respect was the late former boxing champ Arturo Gatti. Despite being a native of Montreal, the Garden State adopted Gatti (who lived in Jersey City) as one of its own and stuck with him through thick and thin. So when UFC President Dana White compared Edgar to Gatti after the lightweight champ turned in a stirring come from behind knockout win over longtime rival Gray Maynard at UFC 136 last October, it was high praise, and fitting in many respects.

“It’s an honor to be compared to Gatti in the sense of toughness, putting on exciting fights and representing Jersey,” said Edgar. “I’ve been to a couple of Gatti fights myself and I was always a big fan of his, but I don’t want to be known as the guy that could take a punch because that means you’re getting hit too much. (Laughs) I’d rather be known as the guy that’s dominant and smart and finds ways to win. But again, if I get praised for being tough, that’s something I welcome too.”

Gatti was one of boxing’s good guys, and his toughness and penchant for delivering exciting fights was legendary. At the same time, he lived as fast and hard outside the ropes as he fought inside them, likely shortening his career at the top. That’s the difference between “Thunder” and Edgar, and it’s why we may see “The Answer” on top of his sport for years to come.

Then again, there are no easy nights in the 155-pound weight class, as Edgar has seen in his four championship fights thus far. In the first two, he went five rounds with Penn in decision wins at UFC 112 and UFC 118. In the next, he had a third consecutive five rounder, rebounding from an almost certain knockout defeat against the only man to ever beat him, Maynard, to earn a draw. And then last October, he again rose from the canvas against Maynard; this time though, his comeback ended in a fourth round knockout victory. That’s a lot of work for any champion, but Edgar’s not complaining. In fact, ask him about fighting someone named Henderson and not Maynard, and he smiles.

“You know, it’s nice,” he said. “Having to think about Gray for such a long time, it’s kind of welcoming to prepare for someone different, physically and mentally.”

Few, if anyone, would say that they welcome a fight with Henderson, the hard-charging former WEC champion, but that’s why Edgar wears the belt around his waist. And while “Smooth” produced his own Edgar-esque highlight reel in the WEC, the champ is only focusing on the recent past of his challenger.

“We only try to look at recent fights because that’s the closest Ben we’re gonna see,” he said. “Obviously, we’re all gonna be different from fight to fight, but you can’t look too far back to see what kind of guy he is; you want to look at stuff more recent because that’s most likely what he’s gonna show up as, and you take it from there. All in all I don’t really try to fight a face or a name; I’m just fighting a style. He’s an opponent and that’s how I try to approach it.”

That’s the smartest approach, because looking at the lineup of contenders waiting for him should he turn back Henderson could drive anyone crazy. So it’s one opponent, one style, and one fight at a time. That’s the mental game in a nutshell, and it’s one Edgar is in the process of mastering, especially the part about hoping for the best but expecting the worst.

“Every fight I would love to get them out of there in 30 seconds and make it a nice, easy day,” he said, “but that just doesn’t seem how it works for me and I never prepare for that. I always prepare for the drag ‘em out wars because you gotta expect that. If you go in there expecting it to be a quick fight and it doesn’t happen, you can kinda get blindsided. I’m expecting a war, I know how tough he is, I know he brings a hellacious pace, and he wants it. This is the UFC title we’re talking about. No one’s gonna walk into this fight not wanting this badly, because I know how I was when I was a challenger, so I gotta approach it as a champion ready for a hungry kid.”